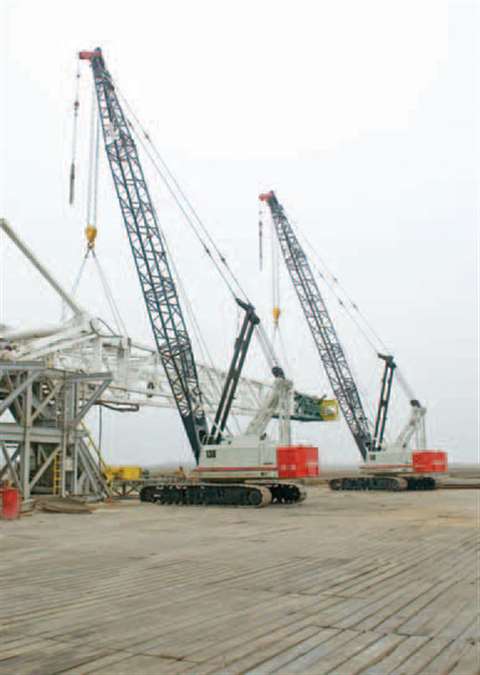 Reminiscent of a pair of Cajun dancers doing a Louisiana two-step, two Link-Belt 138 HYLAB 5 cranes gracefully maneuver a heavy load across a 60,000-square-foot wooden stage. Far from a dance floor, the cranes were actually, jointly and single, moving sections of a massive oil drilling complex, including a drill mast, a generator set, a draw works and other structures across a large temporary ground-level mat platform. All the parts were being assembled and erected onsite. The platform was used to stabilize the oilfield drilling equipment over a soft, saturated combination rice/crawfish field near Slidell, LA. Each crane had an operating footprint of about 450 square feet.

Owned by Rayne, LA-based Oilfield Heavy Haulers, LLC, the machines are a vital part of a skilled oilfield derrick erection team that works all over the Gulf Coast region. The cranes and their operators move from oilfield to oilfield, and are tasked with the speedy assembly and, when drilling of the test well is completed, disassembly, of a giant three-dimensional jigsaw puzzle. The erection of the Greywolf 611 rig calls for 38 truckloads of equipment, all coming in sequentially from an over-the-road distance of about 145 miles away in Shaw, LA.

The Link-Belt 138 H5 with an angle boom has an operating weight of approximately 148,454 pounds. The 80-ton capacity machine features the new SML-10 load moment system which displays load on hook as well as maximum allowable load, boom length, boom angle, tip height and audible warning. In addition, the SML-10 features a function kick-out for both overload and anti-two block occurrences. This load moment system utilizes load sensing in the boom hoist dead end to feed data to the load limiter computer. The 138H5 has a Tier II compliant Mitsubishi 6D16-TLE2A 187 hp power plant.

Known as a compound box structure rig, the particular rig being erected at the site in mid January is considered medium-sized, at 275,000 pounds, and is capable of drilling a test well to a depth of 15,000 feet. The Greywolf 611 rig is classified as a National 80-B and is owned and operated by the Greywolf Drilling Company out of Houston.

Because space is at a premium on every drilling location, dexterity is as much a factor in the choice of a crane as its size and lifting capacity. To a large degree, the skill, experience, and coordination capabilities of the operators determine the pace of the erection-disassembly procedure.

As is now common practice in the oil patch, there is often separate bidding for the different segments of drilling a test well. This may include land clearing and leveling, pile diving and timber mat floor installation, as well as the rig assembly and erection itself. A full service contractor, Oilfield Heavy Haulers can fulfill all of these services, often as a turnkey package.

Likely, the most impressive dual pick using the two Link-Belt 138 H5 cranes was the drill rig's mast. Both 138 H5s had 80 feet of an angle boom with a “horsehead” tip and an 8 part line. The crane lifting the tip end load was picking 38,900 pounds at a boom angle of 66.8 degrees at a working radius of 35 feet. The second crane (lifting the base end of the mast 20 feet high) had a load of 59,000 pounds at a boom angle of 75 degrees with a working radius of 25 feet.

At 57,000 pounds, the compact draw works was one of the heaviest pieces handled by a single 138H5 crane. To lift this piece, the machine was rigged with a boom angle of 74.5 degrees and a 24.6 foot working radius when positioning the load on the box structure 20 feet in the air. The 45 foot long “pick and carry” 500 hp generator and housing weighted 55,000 pounds, was split 28,000 pounds and 27,200 pounds respectively, and “walked” several hundred feet from its storage site to its working location.

From start to finish, setting up a drilling rig like the Greywolf takes about 35 days. If all goes right, all this activity will be repeated on down the road as the once again as the Link-Belt cranes prepare to move the rig to its next exploratory oil well drilling location.