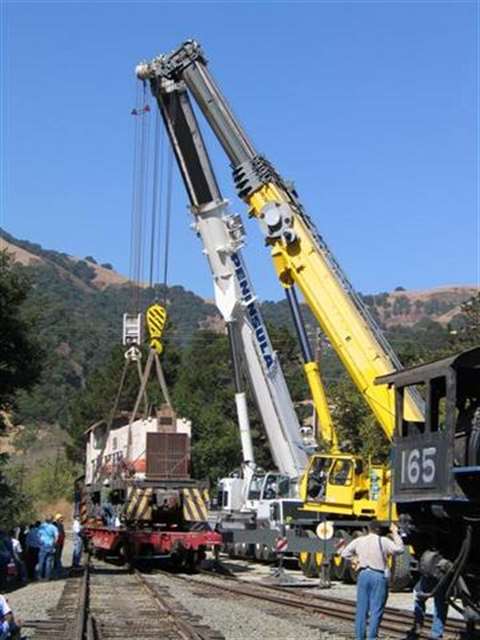 If a shocking budget crisis, soaring unemployment and surprisingly flat population growth stuns Californians, consider what it's like to run a business there.

If you're Peninsula Crane and Rigging, the correct term is "trying" to run a business there.

Says Joe Bauer, president and sales director for the San Jose-based company, "This is still Silicon Valley, but it's not what it once was. We're losing companies to Oregon, Nevada, Arizona, Texas and other states with lower taxes and fewer regulations. We just keep driving businesses away from our state."

A California native, Alger believes his state is often unreasonable toward Peninsula's lines of business. He cites a specific example of a state inspector and his strident attitude. The inspector sparred with Peninsula's staffers before pointing out several steel beams that needed to be covered. Naturally occurring rust, he declared, could eventually find its way into a waterway.

Alger countered the inspector by pointing to a nearby bridge with excessive rust on its steel beams. The state is responsible for maintaining the bridge, which appeared to present a far greater waterway hazard than Peninsula's few uncovered beams.

"What about all that rust on the bridge?" Alger asked the inspector.

Peninsula, which serves San Jose, San Francisco and areas north and south of those cities, operates a four-year-old fleet of tractors. State regulations made it more advantageous to purchase new tractors than modify existing diesel engines. "We had to spend about $6 million for the replacements," Alger says.

Bauer says, "I don't see our state changing its ways about these kinds of regulations."

Alger predicts a bleak outlook for companies that count California cement makers as customers. Heating limestone to produce cement produces carbon dioxide. That process, too, has become an environmental-law target. According to Alger, many cement companies will "shut down and sell their carbon credits instead of making cement."

Many companies have already departed California, which saddens Alger. "We have shopping centers near us on sites where big companies like GE and United Technologies used to be," he says.

High taxation and oppressive regulation have also cost jobs at 45-year-old Peninsula. "We have 30 employees," Alger says. "We once had almost 70."

And where does Peninsula go from here? "We continue to pay our bills," he says. "As for our 2011 outlook, we do our planning. At the same time, we keep looking over our shoulders. There are many more bidders going against us."

As for what's immediately ahead, Alger says, "We're looking at healthcare. Many hospitals here still need seismic retrofitting. Government and business buildings need it, too. We won't see any of that business this year. Probably in 2013."

All along the Pacific coast, those whacks you heard might have been the hammering of state budgets. Steve Bates, vice president of operations at Redmond Heavy Hauling, heard those sounds.

"We're a specialized heavy hauler," says Bates. "Much of our work is hauling concrete and steel girders for bridge construction."

Redmond Heavy Hauling, based in Portland, OR, also serves highway and dam projects, which also face budget scrutiny in California, Oregon and Washington.

"We serve both government and private contractors," Bates says. "In 2010, we did a lot of projects that had been in the funnel for years. Those projects made last year a very solid one for us. This year won't be as good. State funding in our area will be way down."

"We expect improvement in 2012," Bates predicts. "We see an increase in large infrastructure projects by then in states that now struggle with their budgets."

A larger struggle, Bates maintains, is withstanding efforts to reduce hours of service.

"A lot of our work is done at night," he says. "A policy change to cut back on those hours is not something we want."

The company has 10 locations, serving primarily British Columbia and Alberta. Focus is on the power market, which, according to Wiebe, "is coming back to life. Power generation. Power transmission. Also oil and gas development and processing. They look strong for 2011."

Not everything looks strong. He regards residential development as "suppressed" in British Columbia and "dead" in the US West.