The future of battery-powered cranes

With the 2022 SC&RA Crane & Rigging Workshop just around the corner (October 3-5, Dallas, TX), Association members are looking forward to any number of education sessions designed to leave them with a wealth of information to consider, or even take back and apply to their own operations. 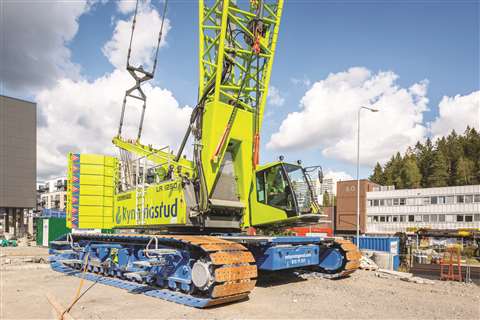 That said, members need only reference the 2021 Workshop in Chicago to remember one such impactful session – titled “Electric Crawler Cranes: The Unplugged Series” – presented by representatives of Liebherr, and intended to educate the audience on all-things electric cranes while also expounding on Liebherr’s own emission-free crane.

Nearly a year later, SC&RA caught up with one of the session’s presenters, Wolfgang Herzog, VP Sales South East & Caribbean at Liebherr USA, and he had a lot to say about how electric is moving into the construction industry across the globe, and what SC&RA members might expect moving forward as the industry adjusts to an ever-changing world and evolves alongside an ever-expanding inventory of modernized equipment.

Within his 2021 presentation, one of the topics Herzog and his colleague spotlighted was the fact that more cities around the world are moving towards lower emissions standards and, overall, more efficient/climate-friendly approaches to work.

“The so-called C40 cities are growing in number worldwide,” he pointed out. “They are very well networked among themselves and pursue two goals: On the one hand, they want to improve the air quality and thus the quality of life for all city dwellers in the short and medium term, and on the other hand, they want to have a long-term effect on the climate changes influenced by humans.”

(The C40 Cities Climate Leadership Group is a collection of 97 cities around the world that represents one twelfth of the world’s population and one quarter of the global economy.)

Additionally, Herzog indicated, one can’t overlook the Paris Agreement – the international climate protection contract which boasts the signatures of 195 countries globally and has influenced companies like Liebherr. “From our perspective as a crawler crane manufacturer, the targeted decarbonization can be achieved by means of electrified drives.”

And thus, understandably, Liebherr has endeavored to reach the European market with its latest electric offering, and the world’s first battery-powered crawler crane, the LR 1250.1 unplugged, which officially rolled out in December 2020.

Herzog explained, “In Europe, there are some countries whose governments are intensively tackling and implementing climate protection targets. In some cases, they are creating investment incentives, and in others, they are defining so-called ‘zero emission construction sites’ in their tenders.”

In the meantime, he added, there are also more and more investors who explicitly require or favor zero emission construction sites. “This was the reason behind why we initially focused on Europe. However, even in the USA we recognize certain similarities – where individual states are accelerating climate-protection agendas.”

Ahead of the curve

Despite the changing tides in the U.S., however, Herzog noted that acceptance of electric construction machinery (crawler cranes, drill rigs, impact pile-driving rigs) is still not as high as it is in Europe – mainly because high-voltage jobsite electricity is not as readily available compared to other parts of the world, and demand for battery/electric-powered machines in the U.S. is not yet as high as in Europe. That said, Liebherr does have one of its battery-powered crawler cranes on display at its Newport News (VA) facility, and at the time of this writing, they’d just sold their first unplugged 275-ton crawler in the U.S. 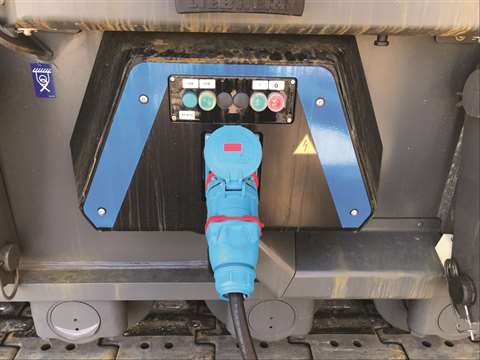 Liebherr initially focused its electric crane on Europe. But in the U.S., more states are accelerating climate-protection agendas.

“As mentioned, our electric machinery is facing the same uphill battles that Tesla faced as it fought for acceptance,” he said. “Another challenge is that a battery-powered machine has higher initial investment costs due to the added cost of the battery – though it should be recognized that the only difference between a traditional diesel-powered machine and the ‘unplugged’ machine is that the diesel engine is replaced with an electric one and a battery pack is added. Handling, controls, load chart, etc., are exactly the same.”

Change being what it is, Herzog sees such impediments as merely temporary. “We anticipate, at some point, world-wide legislation requiring ‘zero-emission’ jobsites, and every construction equipment manufacturer will have to find a solution for their equipment,” he said. “At Liebherr, we’re ahead of this curve with our battery-electric concept, which is a proven technology from the automobile sector.”

As for owning an electric crane, in addition to fuel savings and the economic benefits therein, Herzog pointed to plenty of additional benefits. “I would also mention that electric drives require less maintenance and service due to their design, as the number of moving parts within the unit is significantly lower compared to internal combustion engines,” he stated. “Also, a major advantage, appreciated especially in populated areas and large cities, is the extremely low noise generated by battery-electric equipment. Another advantage that crane operators keep telling us about is the control system – because it’s no different from the controls of diesel units.”

As the construction and transport industries around the world continue to evolve, Herzog rates the potential and long-term value of electric construction machinery very highly. “When you ask our customers this question, the answers are very similar, depending on the country,” he maintained. “There seem to be certain analogies here with electric cars. In Norway, for example, which has the highest percentage of newly registered electric cars in Europe, many of our customers are deeply convinced that the future of the crawler crane will be one hundred percent electric. We hear similar comments from Sweden, Denmark and the UK.”

As for SC&RA members and what they can expect to see in coming years as the industry moves towards modernized equipment and more environmentally sustainable methodologies, Herzog foresees a relatively smooth transition from diesel to battery-electric drive. “The acceptance of this drive has long been beyond discussion,” he said. “At this point, it should be mentioned that, in our view, the world’s largest and most successful main driver of battery-electric concepts is based in the USA, with Tesla.”

Herzog’s advice to construction/transport companies, including SC&RA members, in regards to how the future of equipment is unfolding related to this ever-emerging topic and what they should both expect and adapt to within the market is, if nothing else, pragmatic.

“Given the high gas prices in Europe, our Liebherr diesel engines are traditionally extremely fuel efficient – and changing over to electric engines is just the next step,” he said. “Liebherr expects more environmental regulations in the future across the world as well as within the U.S., which will eventually require crane owners, drill rig and impact pile-driving rig owners to look for new technologies in the market in order to bid on jobs in highly populated areas.”

Pointing back to his presentation at last year’s Crane & Rigging Workshop, Herzog reiterated that battery prices are still rather high, but that will change, and with it, so too will outlooks and opinions on electric construction equipment, especially in the States. “Additionally,” he pointed out, “with gas prices in a consistent state of flux in the U.S., electric-powered construction machines will also, ultimately, become much more economically feasible.”