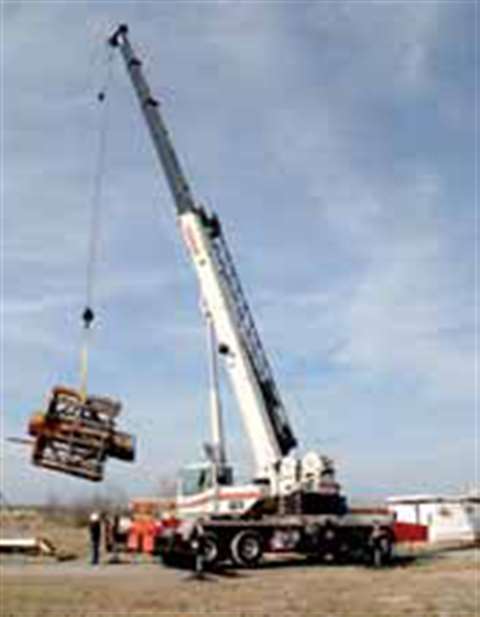 Acadian Contractors, Inc. had reached a major milestone and selected its new 75-ton capacity HTC-8675 Series II Link-Belt hydraulic truck crane for the task. The company was moving an unwieldy, 26,600 pound “boat bumper” section of an offshore production caisson into position for rehabilitation.

Fully two and a half years after beginning the monumental task of rehabilitating many offshore oil exploration and production platforms, the end is finally in sight. The job is just about complete.

This is only one section of the many structures that were severely damaged by the rampaging Hurricanes Katrina and Rita in 2005. Acadian has played a significant role in helping to restore America's essential energy infrastructure in the Gulf Coast region.

“When the 1950s oil boom petered out in the 1970s in Southwest Louisiana, the companies were only drilling down to about 5,000 to 6,000 feet deep. The present drilling/production companies have increased that capability to drill 17,000 to 20,000 feet deep on both land and offshore out in the Gulf of Mexico.

“There's a whole new world of technology down there today. Some of our customers have brought in wells that have tested to 30 million cubic feet a day, with approximately 1,900 barrels of oil per day. That's in this newly reached deep zone,” says Colby Durke of Acadian Contractors, which is based in Abbeville, LA.

Acadian Contractors chose its new Link-Belt for a number of reasons. The contractor, according to Vice President Glynn Hebert, thought it was imperative to purchase a crane with a suitable balance between reach and lift capacity. There were, he says, other less expensive makes of cranes on the market, but a combination of quality manufacturing and dealer service, ruled the choice. He says that the company has had more than satisfactory service from the 15 or 16 Link-Belt machines they have owned.

There were several reasons for Acadian's adding to its crane fleet. Foremost of these was the economy. With the ever-increasing price of petroleum products, which by mid-March was approaching $115 a barrel, there was an increasing need for Acadian's services. Immediately following the twin hurricanes of 2005, there was such a demand for their expertise that the company instituted a second shift operation. Instead of slowing down once those needs were met, there was an increased need to keep pace with the global exploration, recovery and processing of petroleum products. While Acadian principally serves American companies, those firms have a worldwide workforce.

As deepwater oil exploration and production in the Gulf of Mexico became economically feasible, the demand for domestic on-land production also improved. This has increased the workload for Acadian, and the need for cranes with modern technological advances.

Primary among these is the increased safety factors available through the use of on-board load-sensing computers. The crane's new formed four-piece boom, at 41 to 127 feet, adds 12 feet of reach over its predecessor and incorporates Link-Belt's pin and latching system boom. This patented device makes it possible to safely lift a greater load at a longer reach because of the lighter, stronger, boom weight.

The boat bumper was off-loaded from another contractor's barge that dismantled it from an oilrig located on the Outer Continental Shelf in the Gulf of Mexico. Once the 16 foot diameter by 22 foot long piece with a 36 inch diameter center support caisson section is refurbished at the company's fabrication shop, it will then be transported back into the Gulf of Mexico by boat or barge and reinstalled by another contractor at a new well site.

The boat bumper will be stored at Acadian's 50-acre storage yard until the time it will be moved inside to be refurbished.

The HTC-8675II worked at a 32.7-foot radius, with a 68.6-degree boom angle and about 90 feet of boom length, while it lifted the 26,600-pound offshore platform boat bumper. Using a four-part line and rigged with two four-inch wide nylon slings, the HTC-8675II with 14,400 pounds of counterweight lifted the section over several other pieces in need of refurbishment from the oil well drilling platform.