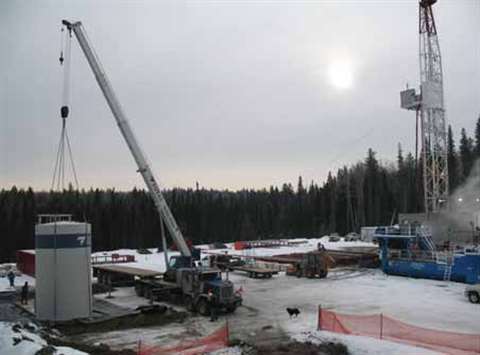 They have been nicknamed “the monster.” But actually, they are application-specific 45-ton capacity boom trucks designed and manufactured by Manitex, Inc of Georgetown, TX. They get their nickname for the challenging work they do in western Canada's oil and gas fields.

North West Crane customer Clint Gaboury, operations manager and trucking coordinator for Total Oilfield Rentals, says the monsters have enabled them “to stay right on the edge of our load chart.”

In the oilfields, the boom trucks are lifting tanks used to store drilling fluid. The boom truck delicately positions each tank. Older equipment could only “spot” four tanks into position before having to move. With the 45-ton Manitex units, a Total Oilfield crew might spot as many as 10 tanks at a time.

Once the tanks are in place, they become portable “reservoirs.” Other companies fill them with drilling fluid, which operators use in the drilling process. Once tanks are empty, Total Oilfield people transport them to the next drilling site.

Besides the heavy duty lifting work they perform, the boom trucks face a range of winter conditions in Canadian oil and gas fields. In the dead of winter, they might operate on ground that is frozen rock-hard.

During extended thawing periods, such as the spring “break-up season,” they must negotiate soft, perilous terrain. In Alberta, frost might be two feet below the surface. Once on-scene, the typical leased drilling site requires boom trucks to function in cramped quarters.

Mark McDade is an independent owner/operator working with DC Energy. The company's specialties include custom rig-ups for drilling and completion applications.

McDade says DC Energy uses boom trucks to simplify tasks while achieving environmental compliance. At a typical site, DC Energy positions the 400-barrel tanks in a close-quarters “tank farm.” The “farm” might have tanks confined in an area as small as 50 feet by 22 feet.

“Alberta's environmental laws are very strict,” McDade says. “We have to have a three-foot-by-six-foot plastic berm surrounding the tanks. Each tank must remain inside the berm. No fluid is permitted to leak outside, either.

The massive tanks weigh 14,000 pounds empty and 22,000 pounds when filled with fluid, though the boom truck handles them only when empty. The tanks are 27 feet tall and 12 feet in diameter. The boom truck lifts them, and then swings them into position inside the berm. They sit on large mats, which the boom truck must also place in position.

“When we finish, the tank farm moves on to the next lease,” after completing a typical project in 12 to 16 hours, McDade says. “We've had some tanks in service for years.”

McDade says workers especially appreciate the unit's custom features, including the heated toolbox. They can put coveralls or other clothing inside the tool box so that they are warm when they reach a new site. Damp gloves go into the toolbox, too. Often, when workers reach the next stop, dry gloves greet them.

“This project was about producing our high-capacity crane and have North West Crane work with the end-customer to specify the trailer configuration,” says Randy Robertson, Manitex sales director. “Western Canada's gas and oil fields are one of the few regions in the world to utilize a semi-trailer behind a truck mounted crane.”

The trailer can haul a range of project essentials, including heavy, massive mats needed at each site. Mats measure as much as 40-feet-by-8 feet. They weigh between 9,000 and 12,000 pounds. A jobsite might require placing five mats side-by-side atop the tank farm's liner. Without matting, tanks would sink into soft ground.

Other company vehicles fill and empty fluid from tanks during drilling. Other companies also are responsible for hauling off used fluid for cleaning by centrifuge and eventual re-use.

Once tanks are empty, the tank farm elements – including tanks, mats and berm sections – are loaded and hauled to the next site. Thanks to the 45 ton monsters.

“We're all over Alberta with these boom trucks,” McDade says. “A typical job lasts 12 to 16 hours. Then we're off to the next oil or gas lease. We only get home a few times a month.”

The concept for the crane came about a couple of years ago and the extensive planning process required months of collaboration. Don Kurjata, vice president of North West Crane, and his North West colleagues CEO Ivan Janssen, and president Jon Janssen would travel to Texas for meetings at Manitex. The crane company would send its engineers to Alberta for meetings with North West Crane.

“We had plenty of PowerPoint presentations as we developed what we wanted and what Manitex could provide,” Kurjata explains. “They would ask, 'Do you want this? Do you want that?' We would tell them 'yes' or 'no.' We continued to exchange suggestions until Manitex gave us what our customers needed.”

Randy Robertson, Manitex director of sales, knows western Canadians are more than able to deal with the frigid climate. “People in that part of Canada are very resourceful,” Robertson says. “They have a remarkable ability to deal with extreme conditions. As a Texan used to mild winters, I have lots of respect and admiration for Canadians.”

Robertson and his company knew they needed to produce a crane as remarkable as the people who would use it. And that's what Manitex did. “It was a niche market opportunity that North West Crane and Manitex identified, then chased it to the ground,” Robertson says. “The result was an example of the manufacturer, the distributor and customer working together to develop a product that would perform tasks the crane owners needed to better serve their customers. And at the same time, the crane owner sees increased productivity and utilization of personnel and equipment.

With all input completed, Manitex produced the first 45-ton model. North West Crane presented it in June, 2006, at an oil and gas show in Calgary, Alberta. Since then, North West Crane has purchased about two-dozen 45-ton models. The company continues to take as many as Manitex turns out and remains the sole customer for this product, Kurjata says.

The crane has a base rating of 45 tons at 8 feet. It has 96 feet of main boom and an optional two-stage, 49-foot offsettable jib providing up to 155 foot maximum tip height. It is equipped with a single 15,000-pound bare drum line pull rated hoist providing up to 10,000 pound single part line pull. The machine features double stage rear out and down stabilizers for the tractor application that minimizes interference with the trailer running gear. It has a 24-foot outrigger spread and removable aluminum outrigger floats, as well as radio-operated outrigger controls allowing the operator to have complete controls anywhere around the machine during set up and rigging operations. The machine has a fully enclosed cab with joystick controls and heating and air conditioning options are available.

The two companies have worked out a strategic process for producing the boom trucks.

When the crane is ready for shipping from the Manitex plant in Texas, a designated, flatbed truck driver from North West Crane hauls the crane in six modules to two sites in Alberta, Canada. They go to Leduc, an Edmonton suburb, and to Grande Prairie, about 300 miles northwest of Edmonton. There, assembly begins with North West's crews blending Manitex crane modules into one unit and then mounting it behind the cab of a Kenworth truck, according to Kurjata.

Much of the preparation process “has nothing to do with the crane,” Kurjata says. North West mounts the crane on the truck's deck, installs a large tool-box, does required welds, attaches the appropriate bumpers, paints the unit with the customer's colors and does everything else needed for delivery. Important features include two steering axles to improve weight distribution. The front end supports about 33,000 pounds.

One challenge stays beyond the reach of North West Crane. The company cannot alter winter weather in western Canada's oil and gas fields, where conditions typically range from dreadful to impossible.