As the benefits of wind power are being increasingly embraced around the world, specialized transport companies are busier than ever delivering key components. Christian Shelton reports.

The global wind industry installed a record 93 GW of new capacity in 2020, a 53 percent year-on-year increase that showed resilience in the face of the Covid-19 pandemic.

This increase in wind power capacity, reported by the Global Wind Energy Council in their Global Wind Report 2021, is due to the extensive construction of wind farms. Accordingly, result specialist transport companies have been kept busy moving turbine components.

Van der Vlist revealed that despite difficult circumstances all journeys were made without any noteworthy incidents.

Laso used a Mercedes SLT tractor with a 250 tonne torque converter, a Nooteboom adapter with inter dolly with a five-axle dolly with hydraulic suspension to compensate for blade inclinations, to move the SG170 wind turbine blade for onshore use.

Laso completed transporting nine wind turbines to the new Tocha II Wind Farm in the central Portuguese city of Cantanhede, a project that it began in December 2020.

Plant Speed makes UK haulage history
Bristol-based heavy haulage specialist Plant Speed has transported what are believed to be the longest wind turbine blades ever moved by road in the UK. The blades and their ‘spacer frames’ measured 68.252 metres long and weighed around 24 tonnes each.

These were unloaded from a vessel at Avonmouth Dock and secured for transportation on Plant Speed’s Nooteboom extendable Super Wing Carrier trailers. The trailers were towed by Plant Speed’s trio of 250 tonne Mercedes-Benz SLT tractor units.

The blades were transported 24 miles to Magor in 80 minutes on a trip that included the Prince of Wales Bridge, the M4 motorway bridge over the River Severn between England and Wales.

The route between the port of Egersund to a site near Maakaknuten included a number of different semi-trailers and low beds for the main components being moved by the Nooteboom mega windmill transporter.

Mammoet delivered 13 wind turbine tower sections, weighing 67 tonnes and measuring 30 metres, for the second phase of the Astana Expo 2017 wind farm project in Kazakhstan at the end of 2020.

The company smashed its own record for the longest land transportation ever undertaken in the country as the route covered more than 3,500 km. Mammoet utilised its hydraulic modular trailers to absorb the uneven road conditions, which also spread the weight of the sections.

The 36 foot long wind turbine shaft was loaded onto a Faymonville MultiMax 3+3 single drop trailer at the port of Milwaukee using a Manitowoc crawler crane. It sat within circular saddles that were lashed to the trailer with chains with the loaded-out transport 94 feet in length.

G&G president Robbie Swan explained, “The route was 103 miles of pure hell with blowing snow and high winds. Cars were also parked and stalled along the roadway. If we did not have this Faymonville single-drop trailer then this trip would have been a flop.”

The semi-trailer’s vessel deck can be hydraulically widened to allow maximum load width flexibility, so that tower segments can be transported at the optimum height, according to Faymonville.

The vessel deck can be continuously adjusted from the basic width of 2,990 up to 4,690 mm to suit the freight. In addition, the low bed semi-trailer is telescopically extendable in length.

Uddevalla Special transporter has two quadruple extendable three-axle WingMax flatbeds in its fleet, which are designed to enable the safe transport of XXL wind turbine elements safely and economically.

The 19.5-inch pendular axle provides enables a steering angle of up to 60 degrees and a maximum stroke of 600 mm, claims Faymonville. In combination with a hydraulic lifting and lowering gooseneck, the WingMax enables wind turbine blades transportation to negotiate obstacles.

Huisman said that because the use of an internationally-flagged wind turbine installation vessel is restricted under the USA’s Jones Act, a feeder vessel with a motion compensated platform offers a reliable and efficient solution for transportation of components in US waters.

The motion compensated platform provides a stable deck area because it actively counterbalances the effects of vessel’s motion, according to Huisman. This means that lifting heavy components and moving an empty jack-up vessel can be done in more severe weather conditions, increasing the weather window for operations.

The dimensions and capacities of the motion compensated platform are optimised for next-generation wind turbines, and designed to compensate for five degrees of vessel motions.

The motion compensated platform can be integrated into the hold of a vessel and aligned with the main deck, making it easy to skid cargo across the platform.

These floating turbines will be installed in deep waters out of view from the coast. As they float, they can also be installed in much deeper waters, up to 800m deep, to catch the strongest and most consistent wind.

Schmidbauer stated that this could become a huge growth area, especially as the technology opens also new possibilities in the United States where suitable offshore locations exist mostly with water depth greater than 200 metres.

The company will provide a Leibherr LR 11350 crawler crane, a Demag CC 2400-1 crawler crane, 130 tonne capacity auxiliary cranes, and 48-axle lines of SPMT for the harbour handling in spring 2022.

International governments continue to urgently meet strict climate targets while energy companies are rushing to build, develop and expand wind farms. Combined with new emerging technologies, such as the floating turbines, the wind energy rush could be the new gold rush. 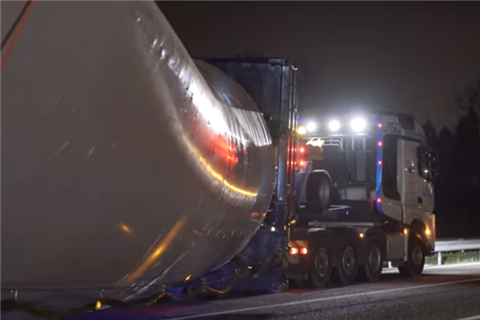 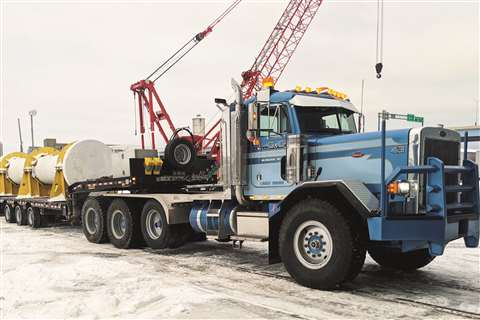 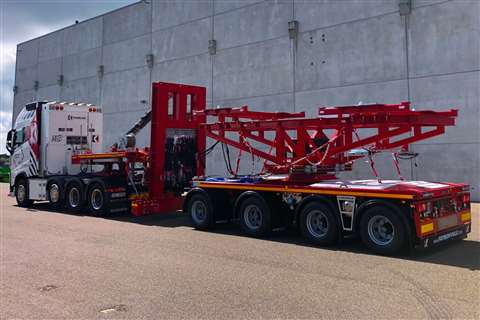