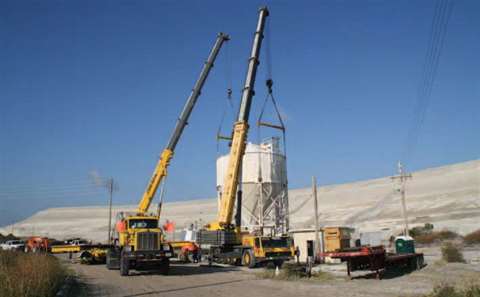 Lifting a 180,000 pound silo and transporting it to a plant a half a mile away, Crane Rental Corp. utilized its two Grove GMK5240s to lift the unit on and off the Goldhofer trailer system

Florida phosphate plant needed more than a mere lift. Orlando, FL-based Crane Rental Corp. (CRC) was contacted by an international industrial contractor to assist with the plant's unique problem: how to relocate a silo to another location a half mile from the plant. The silo was 38 feet tall, 32 feet in diameter, and weighed 180,000 pounds.

After a close review, the shortest route, about a half mile away, was found to be too narrow and congested with power lines and pipe racks. An alternate three-mile route was mapped and planning began. Using a CAD (computer-assisted drafting) program to diagram the lift and the move from start to finish, CRC rigging experts were able to draft a plan so that all involved-crew and customer-knew what to expect.

Job day arrived and CRC's crew was ready to start hoisting by 9 a.m. Working in tandem, two Grove GMK5240 telescopic mobile cranes with 240 ton lift capacity loaded the silo onto a double-wide Goldhofer trailer rigged with 12 axles total, six in a row by two rows side by side. The trailer was 21 feet wide and 30 feet long. CRC owns and operates its transport vehicles and equipment.

After the load was secured, the trailer, silo, and crew headed of down the planned route. During this time, the cranes were also disassembled, moved to the final location, and re-assembled to set the silo in place.

By 6:30 p.m. on the same day the project was complete; planned and executed efficiently and safely.