Daseke, Inc. announced a merger that will absorb The Steelman Companies, enhancing their presence in the transport industry.

Daseke, Inc., a leading consolidator and the largest owner of flatbed and specialized transportation and logistics solutions in North America, has announced a merger that adds The Steelman Companies to the Daseke family.

The Steelman Companies generated an estimated $46 million in revenue and an estimated $7 million in Adjusted EBITDA in 2016. (1), (2) After giving pro forma effect to the merger as well as the additions of the Schilli Companies and Big Freight Systems earlier this year, Daseke’s 2016 revenue and Adjusted EBITDA would have been approximately $818 million and $108 million, (3) respectively, a 25 percent increase and a 22 percent increase, respectively, compared to actual 2016 results.

“A key objective of our decision to go public in February was to enhance our ability to build North America’s premier flatbed and specialized transportation company,” said Don Daseke, president and CEO of Daseke. “We are the largest owner of equipment with over 3,600 trucks and over 7,500 flatbed and specialized trailers, yet Daseke still accounts for less than one percent of our $133 billion market segment. We have now completed three mergers in just over two months and we’re proud to be executing as promised.” 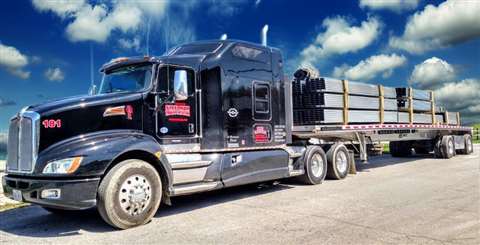 Operating throughout the Midwest, The Steelman Companies boast 26 years of history in the industry. Under the guidance of owners Jim Towery, president and CEO, and Brett Sheets, vice president, The Steelman Companies have grown organically and through mergers, developing a well-diversified, specialized transportation company with two distinct areas of expertise in its operating companies. Steelman Transportation carries flatbed and heavy haul freight while Group One specializes in transporting roll-on powersports, industrial warehousing as well as offering 10-wheel drive-away services.

“The ability to work with the rest of the fantastic companies in the Daseke family, share customers, and develop synergies and efficiencies were all major attractions to joining Daseke,” said Towery. “To move forward, you must have pride in what you’re doing, and we’re definitely proud to be moving forward as a member of the Daseke family.”

Mr. Daseke was equally enthusiastic in his thoughts saying, “An important aspect of the Daseke, Inc. philosophy is not just consolidating companies and purchasing equipment but investing in people. We have had a long relationship with Jim Towery. He has been a leader in the industry representing a strong voice for the flatbed and specialized segment. Plus, his fit with the Daseke family is evident. He has worked closely with several Daseke companies such as Lone Star Transportation, for many years. We also are very excited that the Steelman Companies merger should find immediate synergies with Big Freight Systems of Canada, as we progress deeper into the powersports sector on both sides of the border.”

“We’re seeking companies that share our values about people and running a top tier operation,” continued Daseke. “The Steelman Companies have a terrific reputation and will bring their expertise to our family as we build Daseke together.”