“These cranes are mostly used on construction sites where the crane frequently moves around the jobsite,” Anderson said. “We also use them on remote jobsites such as cell towers, wind projects and transformer jobs.” 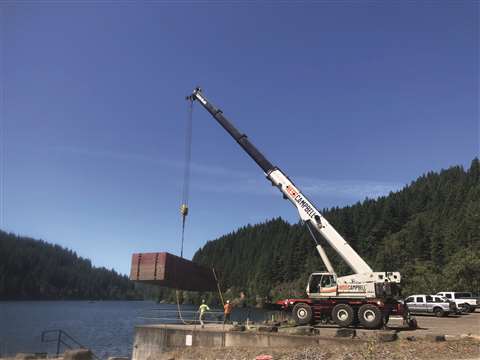 NessCampbell’s Link-Belt RTC80130 works on a dam project in Oregon.

The third set of tires offer a tighter turning radius, a lower travel height and better stability when walking around jobsites or with pick-and-carry applications, he said.

Demand for this class of crane is typically higher than the conventional two-axle RT.

“The 160-ton and the 130-ton class RTs in our fleet are always in high demand and one of NessCampbell’s highest utilized class of cranes,” Anderson said. “The 160-ton Tadano because of its capacity and long boom lengths and the 130-ton Link-Belts because of their best-in-class capacities along with the cranes being cost effective for our customers.”

Tadano recently delivered its first GR1600XL to ESEASA in Mexico.

“Over the last five years or so, we’ve seen a significant shift in the RT market to the higher capacity cranes,” said John Bair, product manager for RTs, Manitowoc. “While the 100-ton class typically sees the highest volume, the demand is strong and growing for 150-ton and higher capacity cranes. That is why we have introduced our Grove GRT9165, which provides the longest boom and strongest capacities on a three-axle RT carrier. Since we launched this new model, we’ve had strong order intake, and feedback has been extremely positive with the ones that are now on jobsites throughout the country.”

Bair said Manitowoc has delivered several Grove GRT9165s to wind farms where they are used to build the larger crawler cranes as well as perform maintenance.

“Customers have noted the capability to set up an entire crawler crane from one location, which is a significant time savings,” said Bair. “With smaller RT cranes you would have to move and set up the RT crane multiple times when installing the tracks, counterweight and inserts on the crawler crane. With the GRT9165’s boom length and strong capacities, this can potentially do all of this from one location. We have also put GRT9165’s to work in refineries, shipyards and various general construction applications.”

The largest capacity crane in Link-Belt’s RT product range, Kelly said the Link-Belt RTC-80160 Series II is quick to set up, simple to operate and offers ease of transport. He said demand has been growing steadily and that these cranes get a lot of work on a variety of jobsites. They have been ideal for shipyard work.

“The six-wheel drive allows you to get out on the piers and work with the longer boom easier,” he said. “We were the first with this style of crane and the reception has been strong. While demand for RTs in general has been flat the last couple of years, had it not been for the pandemic, we think we would have seen the same or even better sales this year over last year.”

Tadano has also had success with its 160-ton GR1600XL. With 200 feet of main boom, the crane has a strong load chart and it has four different steering options for optimal travel in tight spaces. It was designed for low cost of ownership, Tadano said.

Based in Tampico, Mexico, ESEASA has the largest crane fleet in Mexico. The company was looking for a dependable and versatile rough terrain crane for refinery projects and offshore oil platform construction. The company ended up buying a Tadano GR-1600XL. With its small footprint, long boom and high lifting capacity, the Tadano GR-1600XL offers greater mobility and more cost-efficient transport. 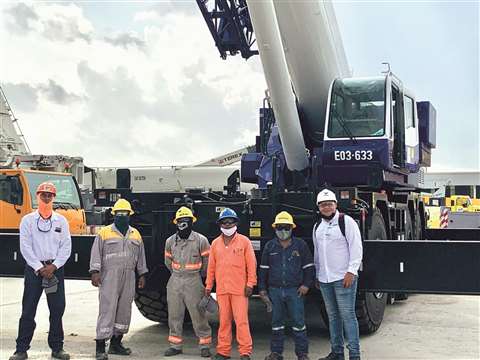 ESEASA has the largest crane fleet in Mexico.

At a width of just 11.5 feet, a boom length of up to 200.1 feet and four steering modes, the GR-1600XL has a hydraulic offset luffing jib that is simple to operate. The cab is capable of tilting up to 15 degrees for optimized operator visibility and safety. The GR-1600-3’s weight of 114,270 pounds (51.8 tons without self-removable counterweight and self-removable front and rear outriggers) allows for efficient transportability. 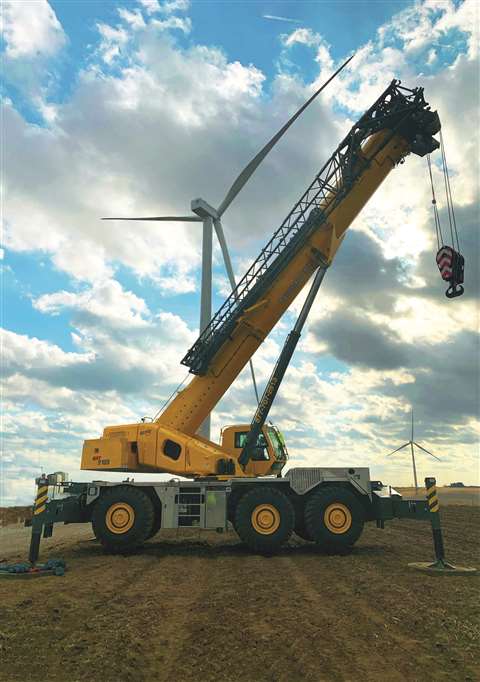 As construction jobs require heavier picks within spaces that get more constrained every day, Nebraska Crane was on the lookout for a strong, high-capacity crane, but compact enough to easily maneuver in all kinds of job sites. The company purchased a Grove GRT9165. The crane has been working non-stop since its arrival at Nebraska Crane’s facility in December of last year, performing maintenance work on wind turbines in Iowa and, most recently, assisting with the construction of a large parking garage in Nebraska, where it is currently setting precast concrete panels.

“We are very pleased with the performance of our new GRT9165. Being a Grove product, it is exactly what we expected,” said Ty Noyes, operations manager at Nebraska Crane. “Its strong charts and boom length provide fantastic capabilities in the field. This job at the parking garage, for example, would traditionally be done with a small crawler crane. But we were able to do it with the GRT9165 at a lower cost while adding more flexibility to the job site, as we can move this compact rough-terrain crane around where we need it.”

With a 165-ton capacity, the GRT9165 features class leading load charts and a 205 foot six-section, pinned boom. It has been designed for easy transport, with a compact overall height of 12.4 feet. It also has a hydraulically removable counterweight system and outrigger boxes, both of which are fully self-rigging, which eliminates the need for an assist crane during set-up. The new three-axle carrier with hydro-gas suspension on the rear axles provides the ability to adjust the height for transportation, in addition to providing a comfortable ride.