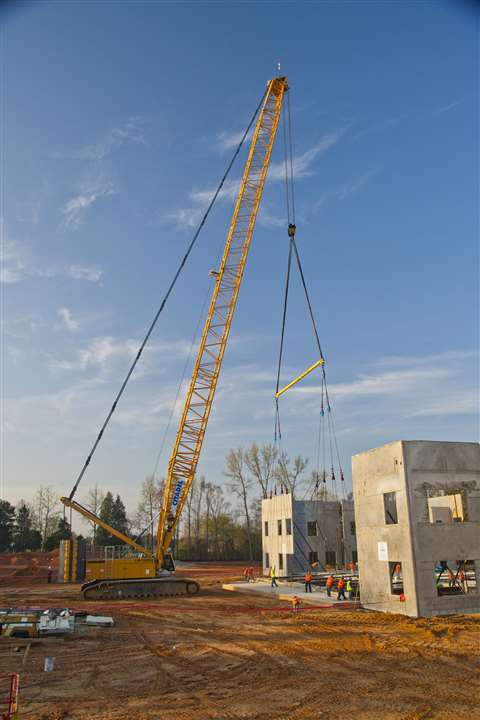 It’s not every day that a crane makes a world record-setting lift, but that is just what happened in Rock Hill, SC. The crane involved was a Liebherr LR 1300 owned by Citadel Contractors, Inc., and the project was the construction of York Preparatory Academy High School.

“This particular wall section was designed with several openings, making it hard to find a place to add a joint,” he explains. “Our idea was to pour an 89-foot wide panel with multiple openings. We created a model; we made up little miniature panels and positioned the panels on the slab the way they should be poured.”

While the lift did not test the capacity of the LR 1300, the rigging plan required careful execution. The huge Tilt-Up panel measured approximately 89-feet wide by 30-feet tall and weighed about 130,000 pounds. Typical panels on the project measured 25-feet wide and 30-feet tall.

Citadel, which has been performing Tilt-Up work for more than 15 years, specializes in this type of construction. The company has lifted and set into place larger than normal Tilt-Up panels, but the one in Rock Hill, SC was the widest.

This particular Tilt-Up panel was designed with nine vertical openings. Using a 38-foot spreader bar, the wall was lifted up from 16 pick points designed into the face of the wall system. Four crewmen on the ground held onto ropes at each pick point, slowly guiding the panel and keeping it level as the crane operator slowly lifted it into position. The lift required expert riggers and signal persons as well as an experienced Tilt-Up crane operator, according to Swagert.

“Fortunately, we had all of the necessary rigging and lifting gear,” says Swagert. “If we did not already have it, it could have made this lift cost prohibitive. This was the fourth building on the campus of YPA. The other three buildings were built last year and school was in session so the buildings were occupied. Certain parts of the site were flagged off to keep students (and parents) at a safe viewing distance.”

Wolfgang Herzog, vice president sales, Southeast and Caribbean Liebherr Nenzing Crane Co., was on the Citadel jobsite the day of the lift.

“Being there and witnessing the excitement and joy of everyone involved about this perfectly executed lift was a very unique experience,” he says. “We at Liebherr are proud that the LR 1300 gave Citadel the possibility to archive this world record lift.”

Swagert says the 330-ton capacity Liebherr LR 1300 was the perfect crane for this project. The crane offered the productivity required and also offers quick and easy transport and assembly, he adds.

“The LR 1300 gives us the opportunity to do bigger and heavier Tilt-Up panels due to its outstanding load chart,” he says. “The operator also loves the crane due to its ease of operation and all important machine data can be accessed from our office via the onboard LiDat System. The winches have higher line pull and are faster than other machines in this class – which makes it also the perfect machine for us for hanging steel.”

Another distinguishing feature of the LR 1300 is its large number of boom and jib configurations. The combined length of main boom and luffing jib can be as much as 564 feet.

Swagert says Citadel is apt to break its own Tilt-Up panel record in the near future.

“We have two additional schools with this client coming up,” he says. “He has requested a panel that is 100-feet wide. We are entertaining his request, but not certain of the feasibility.” 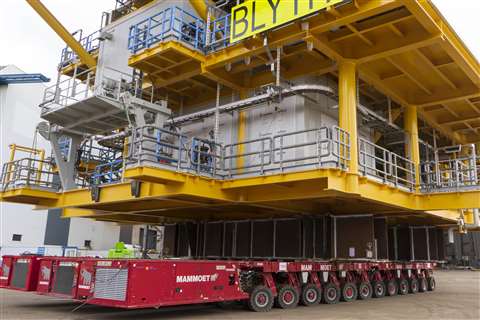 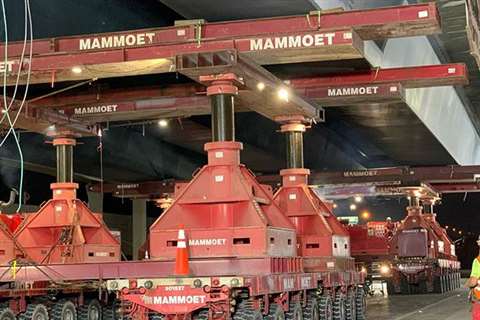