Here are the results of our 2020 IC TopLift competition:

In the 12 months leading up to September 2020 many spectacular lifts took place worldwide, covered by this magazine. We selected our top ten and gave readers a chance to vote on their favourite, as part of our annual TopLift competition.

We had a great response for the competition, with the power of social media aiding greater voting engagement than ever before. Every entry received multiple votes and we’d just like to thank everyone who voted.

There was, however, a stand-out winner with Entry 6 taking 47 percent of the total votes. This was followed by Entry 3, which took 26 percent of the votes and, in third place, Entry 10, with 11 percent of total votes. ICST congratulates the winners and the people who make TopLift possible, namely those responsible for the exceptional lifting projects featured in the competition and for sharing them with us in the form of photos, words and video.

If your company has completed a job in the last couple of months, or if you do one before mid-August 2021 that you think merits entry into next year’s TopLift competition, and-or it would make an interesting site report in International Cranes and Specialized Transport magazine, please send details to the editor, Alex Dahm, at alex.dahm@khl. com, or by post to: KHL Group, Southfields, Southview Road, Wadhurst, East Sussex, TN5 6TP, United Kingdom.

Winner: Entry 6. Fit for a king

Lifts don’t need to be big to be beautiful. Site conditions resulted in an LTM 1350-6.1 and a Liebherr 32 TTR fast erecting tower crane being located on opposite sides of the historic Linderhof Palace to lift elements of the Palace’s façade and waterfall, which weighed up to three tonnes.

Marr Contracting claimed the world’s heaviest tower crane lift during the boring of a new subway tunnel in Australia. It used its 330 tonne capacity Favco M2480D luffing jib tower crane to lift a 225 t section of a tunnel boring machine (TBM). The M2480D was rigged with a 55 metre boom and a six fall 330 t hook block. The crane was operated from inside a station box measuring 4 x 4 m, located next to the TBM’s retrieval point.

Big Carl’s first lift was at the nuclear power station jobsite at Hinkley Point C in the UK. Sarens’ 5,000 tonne capacity SGC-250 super heavy lift ring crane is scheduled to be there for the next four years during which time it will lift more than 600 pieces of prefabricated components, including the dome over the reactor. 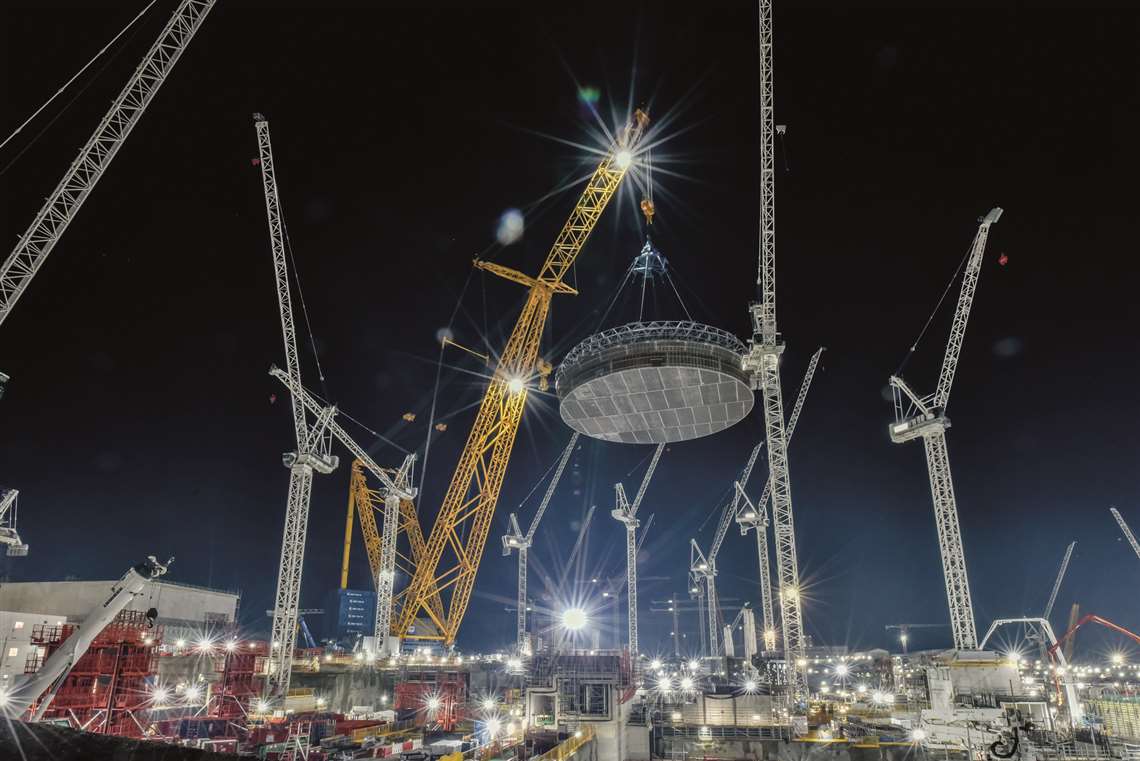