A tower crane has collapsed on a construction site in the east of the UK’s capital, London, killing one woman and injuring four. 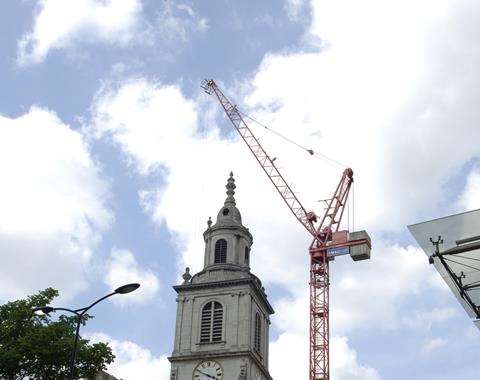 Photos show a red luffing jib Wolff tower crane on its back across a block of flats under construction and a house. The crane is on a site in Compton Close, Bow, to the east of the city.

The BBC reported that a woman was found on the first floor of one of the houses and died at the scene. Four others were injured, including two people taken to hospital for head injuries.

Graham Ellis, London Fire Brigade assistant commissioner, said, “A 20 metre crane has collapsed onto a block of flats under development and into two terraced houses on Compton Close.

“Our Urban Search and Rescue crews are undertaking a complex rescue operation and using specialist equipment to search the properties.

“This is a multi-agency response and is likely to be a protracted incident. I would ask people to avoid the area.”

The fire brigade was called at 14.39 on 8 July. Fire crews from Poplar, Whitechapel, Stratford and surrounding stations attended the incident. The fire brigade deployed a drone to provide aerial imagery to aid with the rescue.

One of the photos shows a large wheeled mobile crane with its boom up at the site.

“On Wednesday, July 8th at 14.40 BST a Wolff tower crane belonging to Wolffkran Ltd. collapsed on a construction site in Bow, East London. According to the authorities, one resident of the adjacent houses that were struck by the jib of the crane died and four other people were injured, two of which are Wolffkran employees. Both are in hospital, with one seriously injured and the other scheduled to be released today.

The Wolffkran management and staff are deeply upset by this tragedy and express their deepest sympathy to the family of the woman that died in the incident. Our thoughts are with all those affected, our own staff, and their families, and we thank the rescue teams for their work on site. Employees of Wolffkran Ltd have been on site since yesterday supporting the responsible authorities in their investigations and preparations to remove the crane from the site.

The affected crane is a Wolff luffing jib crane of type Wolff 355 B, which is one of Wolffkran’s most tried and tested cranes, reliable in operation worldwide, and currently in operation on 18 sites across the UK. The crane on the construction site in Bow was only 10 years old and was fully erected on a 22 metre tower the day before the incident.

Wolffkran Ltd is a subsidiary of the globally active crane manufacturer Wolffkran. It has been providing tower crane services to the UK construction industry for 45 years. It operates out of Sheffield and employs some 306 people.”