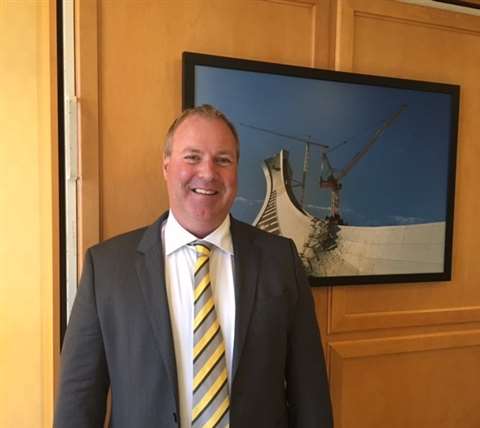 Mark Forbes, Morrow’s sales manager in Canada, is responsible for the company’s involvement in the Olympic Park project.

The striking Olympic Tower in Montreal, built for the 1976 Olympic Games, is one of Canada’s most recognizable buildings. To prepare it for new occupants the immense concrete building is undergoing a CDN $100 million refurbishment to bring it back to its former glory. At 540 feet, it is the world’s tallest inclined tower and that, coupled with the sheer size of the building and the underground structure below it, presented challenges for its refurbishment. 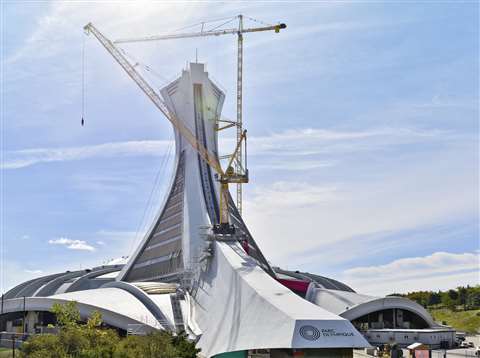 Work to construct the Parc Olympique started in 1967 and was finished in 1976 in time for the Montreal Olympics. The architect is Roger Taillibert. The main tenant of the newly refurbished tower will be local banking group Desjardins. It will occupy the tower with more than 1,000 employees. After the tower refurbishment is finished the bowl or arena part will also be done.

Oregon-based Morrow Equipment was working for Montreal-based contractor Pomerleau. Pomerleau was trying to find a way, using mobile cranes, to reach all points on the tower, including the roof, to carry out the refurb work.

Mark Forbes, Morrow Equipment sales manager in Canada, takes up the story. “These would have been very large mobile cranes and there is very limited access to the site and few suitable positions to set up such cranes,” he said. “The biggest issue is the underground structure. When I first took a look at this, looking at the size of the mobiles, knowing the cost and limited availability of those cranes, I saw that it could be a worthwhile project for Morrow.”

Morrow’s office in Montreal came up with a scheme for the high profile project that addressed concerns from the Olympic Park building’s owner, a government entity in Quebec, over safety and cost overruns.

The first phase of the project was demolition, removing the skin of the tower which was made from large precast concrete panels.

of capacity to do that,” Forbes said.

Morrow’s idea was to use two tower cranes instead of competing proposals using large mobile or crawler cranes.

To win the job, however, a solution was also essential for the second phase. It was to use man baskets suspended from cranes from where operators would refurbish the remaining surface of the tower’s structure. It would then have a whole new façade of glass, metal and LED lighting installed.

“Current legislation in Quebec is such that it makes no sense: man basket use on tower cranes is not allowed,” Forbes said. “So that was the first problem. Behind the scenes I started work to get approval from CSST [the commission for standards, health and safety]. In the meantime, we were still pursuing the project with Pomerleau on pricing. When Pomerleau went to see CSST to see what their opinion was on hanging man baskets, they were surprised to see that we had already initiated that effort and were well under way with it.”

Pomerleau picked up the points from there and came up with a detailed work plan with the assistance of Morrow and Morrow Engineering. At the end of the day that was accepted by CSST and was the basis of allowing them to move forward with tower cranes.

Forbes continued, “The approval for this is ground-breaking and Pomerleau is still working with CSST internally to have province-wide acceptance of man baskets on tower cranes. At the moment it is site-specific. It is a first step towards new legislation for Quebec.”

Peter Juhren, Morrow vice president of operations, said that using man baskets was the only available way to complete the project to access all points up and down and all sides of the tower.

“About 60 percent of the work on the project involves using man baskets suspended from the cranes,” Juhren said. It was at least 30 percent if not 50 percent cheaper using tower cranes than using mobile cranes, Forbes said. “Not only that, the timeline for installation and getting the project under way was much shorter with tower cranes,” Forbes concluded.

Minimal modification was needed to use the cranes with man baskets. The 630 had a secondary brake added while the 710 already had one. Forbes explained, “We modified the hook blocks a little bit. The hanging man basket has rigging so that it doesn’t fall if the hook separated from the block or if the rigging fails, the same as for mobile cranes.”

The second biggest point with the 630 was its ability to have a hook height of 630 feet which is above the top of the tower, with one tie-in.

“First of all we determined that it was possible to do,” Forbes said. “The tie-in is 65 feet long. With Morrow Engineering we came up with an erection process where we could freestand the tower, make the tie-in connection to the building – which was a challenge – and then erect the crane on top of the tower after that with the tie-in connected.”

The tie-in is three extended custom struts. Lots of thought went into them, Forbes said. They have walkways on them as that is the only way to do the daily inspections. Inspecting the pin and keeper can only be done from the tower side. They have fall arrest lanyard attachment points, and there are step-downs for access to make the connections.

A 661-ton capacity Demag CC 2800-1 crawler with luffing jib from Grues JM Francoeur was used. The whole area had to be matted and there was 6,000 tons of fill to level the surface, compacted to 98 percent, drainage added and then the mats on top. Extensive truss work was installed in the basement of the building to support the tower crane.

The 710 tower crane was erected using a 551 ton capacity Liebherr LTM 1500 telescopic wheeled mobile crane with luffing jib, also from Grues JM Francoeur. The 710 sits on a portal base straddling a track for a funicular railway that runs up the spine of the tower to an observatory on top. Along with the rest of the building, the railway remains in operation. Both cranes are working at the same time. The 630 is working a double shift and it will be up well into 2018. The 710 will come down at the end of 2017. Both cranes have Hook Cam cameras with remote viewing stations.