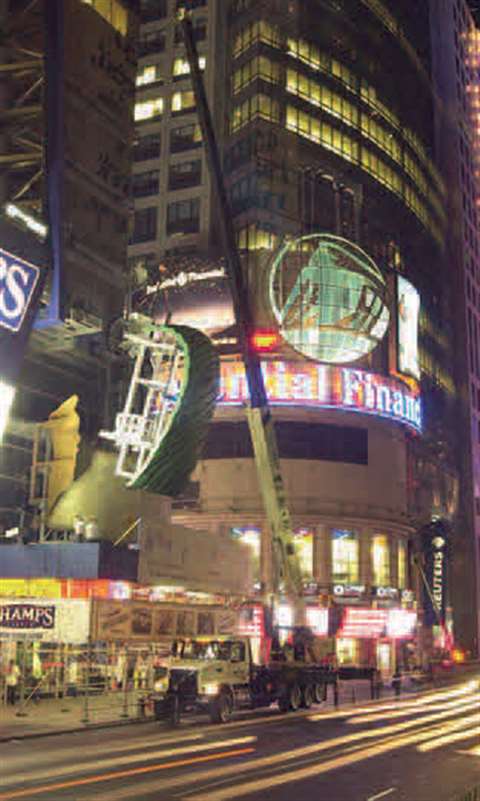 Simply put, the boom truck business is booming. Describing the market as experiencing a “dramatic upturn,” National Cranes' Lyle Jacobson says his company has had to adjust its production schedule more than once over the last few months to meet demand. “Demand has been well beyond what we expected,” admitted Jacobson. “Our backlog is longer than we want it to be but we are getting the machines delivered faster than ever.”

The same is true at Manitex and Terex. “All of our high capacity models are selling as fast as we can build them,” says Scott Rolston, general manager of Manitex. “We've never experienced a backlog like we have now.”

Terex's Scott Smith says his company's boom truck sales are 30% better than last year. “The boom truck is a tool of the trade,” says Smith, “We're seeing great demand. Our customers consider them to be a good buy for the money.”

But it's not just the “big three” boom truck manufacturers that are experiencing boom times in the boom truck industry. Several new manufacturers have emerged and are working to carve a larger piece of the market share pie. Elliott Equipment, Tadano America, Spydercrane, and Altec are among the relative newcomers to the American market, and they too are reporting increased sales and expanding distributor networks.

With a line of boom trucks ranging from 10 to 32 tons, Omaha, NE-based Elliott Equipment says it is enjoying success with its range that was introduced in 2002. “We were able to take Elliott's core strengths in aerial work platforms and develop boom trucks which are heavy duty and easy to maintain,” says Jim Glazer, president and CEO.

Tadano America has made its mark in the general construction market and in several niches. e company has sold 75 of its new TM-1882 model, which sales manager Bryan Dammann says was designed for the California truss market. “We're responding to diff erentmarket segments,” says Dammann. ”We are holding our first distributor meeting this summer, and we have more models on the drawing board to introduce.”

Dammann says a roofi ng company in Ohio recently purchased six Tadano tractor-trailer models, and that its boom trucks are also doing well with energy contractors and in the oil field services sector.

Spydercranes is also making itself known, producing a low tonnage model with extra-long reach. “The boom truck we are having the most success with is our rear-mounted, 15-ton crane that we mount on a single, rear-axle truck,” says Roger Bassetti, Spydercranes vice president marketing and sales. “It has a tip height of 92 feet and is appealing to end users who require a long boom.”

Bassetti, and president and CEO, Warren Wagoner, purchased the Unic/Spydercrane import operation in 1999 and have since developed what is claimed to be a strong distribution network for their products.

Anticipating the current boom was not something that any of the manufacturers or dealers did very well, Bassetti says. “I think everyone got caught short, not expecting the upturn quite so fast,” he explains, “The truck people have also had an awful time keeping up too, and we have even gotten trapped, to a lesser degree than the others. We've all been behind the eight ball.”

QMC Cranes, which designs and sells short boom, high-capacity boom trucks primarily to the precast concrete and oil field services sector, has seen a swell in orders over the last six to eight months. The company “sold out” in 2004 and is already maxed out in 2005. “We have orders into 2006,” says Mark Mason, sales manager at QMC. “It's just been phenomenal. We consider this to be business-climate driven.”

Most every manufacturer contacted for this article agrees with Mason, attributing the sales boom to a strong US economy. “It's [due to] several factors,” Rolston at Manitex explains, “There's willingness by dealers to invest in their rental fl eets, there's strong activity in the area of general construction, there's strong activity in the energy sector, both in the oil field and power line distribution.” Manitex also recently concluded a large military contract.

Lyle Jacobson at National says lower interest rates are contributing to the brisk sales. “We are also seeing a lot of our customers replacing their older machines or sizing up,” he explains, “Most of our dealers tell us that the units they have on order are already sold. Whatever it is, it's a good problem to have.” While times aregood, Jacobson said the competition for the deal is fierce, mainly due to the newcomers in the market. As recently as four years ago, after Manitex purchased USTC and Pioneer Cranes, the boom truck market had just three major players. Then, in 2002, Manitowoc purchased Grove Worldwide, which owned National. Because Manitowoc owned Manitex, the federal government determined Manitowoc would have too much market share if it owned both companies and so forced it to sell one. Manitex went on the market and was sold to Quantum Value Partners in 2003.

Many in the industry speculate that the economic recovery and the disruption at Manitex, National and Terex gave companies like Elliott, Tadano, Spydercranes and Alteca chance to get a toe-hold in the market. “The economic recovery and the instability in the market in the various relocations of the major players was a factor,“ explains Glazer at Elliott.

It's not just the manufacturers who are singing the praises of the boom truck boom. Distributors are very pleased with their sales volumes and their only complaint is availability.

“It's been an active market,” says Steve Brown, vice president sales for Modern Equipment Sales, based in Pennsylvania. “Inventory and availability are problems. You just better have ordered it about a year ago.”

Demand for boom trucks spans all designs and capacities, with the larger manufacturers selling the higher capacity models and the smaller ones catering for the niche markets. Brown says the 30-ton plus class is getting the most inquiries from his customers. “It used to be that the 23-and-a-half tonner was the workhorse of the industry,” he says. “We are also seeing more interest in the riding seat categories. We are starting to see a need for more of the creature comforts for the operator.”

Modern Equipment Sales, which sells boom trucks to crane rental companies and owneroperators in the mid-Atlantic region, specializes in truck-mounted cranes and boom trucks. Modern sells several lines, including Terex, National and Elliott, as well as knuckle boom trucks, including Fassi and Palfi nger. Demand is also brisk in the nation'smid-section. “Lead times are topped out with the cranes and the trucks,” says TJ Reed of Alt Sales Corp. “The biggest problem is availability.” Reed says most of Alt's sales are tied to general construction activity, but that they have had several customers replacing old, worn out units with new ones.

Alt sells Terex, National, Manitex and Tadano America, all of which have gained market share, Reed says, explaining, “The good thing about the boom truck is that it is a flexible machine that can be adapted to several applications.” Reed continues, “You can keep them busy. If one market is down you can redirect the machine somewhere else.”

Oil and gas contractors are updating their fleets. In Texas, Louisiana and Colorado, oil and gas services firms are buying all the boom trucks they can get their hands on. Todd Elkins, regional manager for H&E Equipment, says the oil field services sector has been a solid customer in the Southwest. Petrochemical companies along the Texas and Louisiana Gulf Coast are operating at full capacity, which is also contributing to demand.