Chances are very high you have been behind a Trail King trailer at some point in your driving history. The company produces an array of trailers for such industries as agriculture, materials hauling, open deck construction and tagalong. And it produces some of the most revered heavy haul trailers in the world. 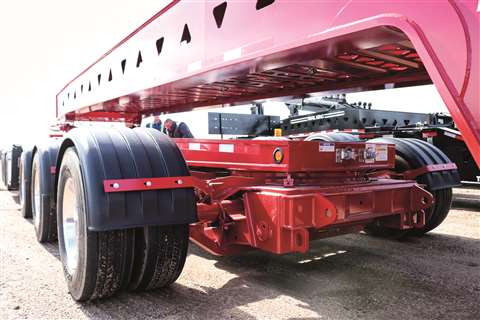 Trail King Industries got its start in 1974 as Western Ag Sales. Gordon and Shirley Thomsen started the company from their home in Mitchell, SD. They were primarily a distributor and sales representative for manufacturers of agricultural equipment.

Four years later, the Thomsen’s purchased Mitchell, SD-based Plains Industries, which produced a line of trailers called Trail King. The product range was quickly expanded to include trailers with enhanced features such as hydraulic tails and detachable goosenecks.

“The most notable feature was Trail King’s development of what many at the time considered the best hydraulic detachable gooseneck in the industry, a system that made hooking up and unhooking a simple, one-person 60-second connection,” according to the company.

By the end of the 1970s, emphasis was shifted from agricultural equipment to focus exclusively on producing Trail King trailers. In 1982, Trail King joined the SC&RA, and in 1983, the company’s name was changed to Trail King Industries. The Thomsen’s son Jerry, who had worked for the company his parents started since he was a teenager, ran the company for more than 20 years. He was active in SC&RA, serving as president and chairman of the Association from 2005 to 2007.

In 2011 Gordon Thomsen was named the 11th recipient of the SC&RA’s Golden Achievement Award. A consummate salesman, he was known for saying “Nothing happens until someone sells something.” Thomsen passed away in 2016.

In 2019, Trail King made the leap to take its product line global by partnering with with Goldhofer. The two companies are cross marketing their products.