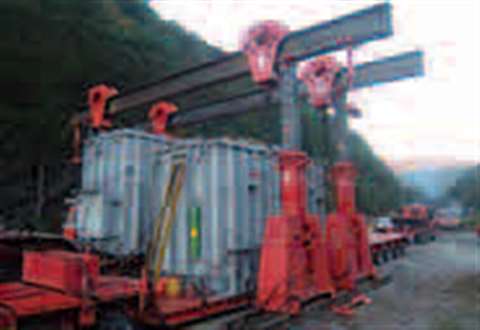 Dominion Virginia Power, one the 10 largest electricity suppliers in the US, awarded the contract to move four 400,000 pound electricity transformers via a competitive bidding process to family firm Henry A Selinsky, based in Canton, Ohio. The job entailed the transport of the transformers over 52 miles of road networks in Virginia and West Virginia. Start point for the journey was a rail siding in Allegheny, West Virginia, and its end was the Bath County Pump Station in Virginia. Selinsky was tasked with unloading the transformers from railcars at the siding, transporting them to their final destination, and once there, offl oading and placing them onto temporary foundations. Each of the four units weighed 400,000 pounds and measured 27 feet 1 inch long, 12 feet 4 inches wide and 14 feet 10 inches high.

Planning and preparing for the move involved considerable eff ort by Selinsky, including a total of 180 hours of preparation work. This entailed 20 hours surveying the route and potential stop stations and 120 hours securing the various permits required from District DOT offi ces, bridge departments and district engineers of the states of Virginia and West Virginia. In addition, a portable bridge had to be designed and engineered, which took 40 hours. Fabrication took a further 5,760 hours. Selinksy used a diverse set of its equipment to lift and transport the four transformers to their new home. At the rail siding, a J&R 500ton hydraulic gantry with traversing power links lifted the transformers from the railcar and positioned them onto a 12 line Goldhofer transporter with a 33 foot drop deck and front and rear prime movers. Once at the pump station, a 500 ton hydraulic sliding system was used to offl oad the transformers.

Selinsky was expected to make the move without disrupting routine traffi c fl ow. To do this, it developed a detailed traffi c control plan that created a series of stop stations along the route and flagging stations at major intersections.

There were three of the latter – at the intersection of US60 and SR92, at the bridge crossing at Neola, WV, and at the intersection of SR92 and SR39. Seventeen stop stations were also established, as determined by West Virginia District 9, to allow following traffi c to pass. Not all of these were actually used, however, as traffi c was lighter than expected at some points. The flag stations were manned and used twoway radio communication to stop traffic prior to the arrival of the load. The stop stations were unmanned and were flagged by escorting vehicles and state police during stops.

A two-mile section of the route was on I-64 but the company was not granted permission to cross the Interstate on the SR311 bridge to reach the westbound lane. The transporter was, therefore, granted permission to enter I-64 via the eastbound exit, travel west alongat its corporate facility in Canton. Here the dimensions of the turns and clearances were laid out and dry runs made. The best method of descent was to remove the front prime mover and control the vehicle using the rear unit, with braking being provided both by the transporter and the rear prime mover.

One final obstacle now lay in the path of the transport: a bridge on the final approach to the Bath pump station that had to be bypassed. Fortunately there is a construction haul road over the causeway of a nearby dam. After this road was repaired, the Goldhofer and its prime movers used it to cross over the river and move on to their final destination.

The move over the entire route had to be coordinated with local school bus traffi c, which had priority to pass at any point it could safely do so.

Actual transport took place over two days, beginning at first light on day one and ending at the second bridge jump at Neola, West Virginia – a distance of approximately 27miles. An early start on the second day was also required, and Bath was reached by day's end. This leg of the journey included the necessarily slow progress round the narrow turns on SR39 in the national forest in Virginia.

All parties involved, however, were more than satisfi ed with the effi ciency and speed with which Selinsky transported all four transformers to their new home at the Bath County Pump Station.