Truck cranes are simple to operate, easy to dispatch and cost effective to operate.

“When a truck crane can be utilized, it offers certain cost efficiencies such as fast and easy transport and erection,” said Ken Martinek, vice president and general manager, Stevenson Sales and Service, based in the Chicago area. “In most cases, a boom dolly is not required, and travel speeds are greater than all terrain cranes. Erection is typically just counterweight installation.”

Martinek said truck cranes continue to be popular when they are the right crane for the job at hand. 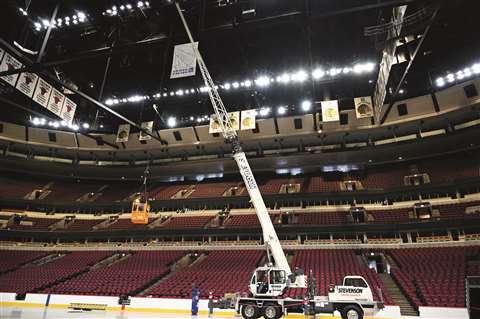 A Stevenson Crane Service Terex T340-XL drove into Chicago’s United Center, home of the Bulls and Black Hawks. The crane lifted a man basket so workers could prepare for the installation of a new scoreboard.

“Truck cranes offer fast (60-mile per hour) travel speeds, are easy to transport, erect and have a relatively lower cost of operation,” he said. “They are also comparatively simple to use.”

However, Martinek does think the market for truck cranes is decreasing.

“If you define the truck crane market as hydraulic telescopic boom truck cranes in capacities from 40 through 140 tons (currently produced models), then the answer is yes, the market is shrinking,” he said. “The principal reason is lack of availability from manufacturers.”

Until recently, Martinek said Terex was the only manufacturer producing a 3-axle truck crane, the T 340-1 and T 340-1 XL, both with 40 tons of capacity. With Terex’s truck crane business recently sold to Load King, the truck crane product line could change or end altogether. Terex had been producing four models of truck cranes ranging from 40 to 80 tons.

Grove is the only manufacturer producing a 3-axle machine, and it hasn’t hit the streets yet, Martinek said.

Some people in the industry have theorized that boom trucks and all terrain cranes would make truck cranes obsolete. But that has not happened. Grove and Link-Belt both continue to develop their truck crane product lines.

Link-Belt produces the largest line of truck cranes on the market, offering six models from 60 to 140 tons capacity. The company’s newest truck crane, the HTC-86110, base rated at 110 tons, was launched in late 2015. 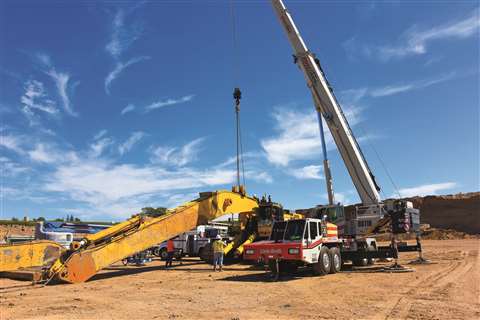 The 86110 features a 6-section, 164-foot main boom that challenges all terrain cranes in its class, the company said. The main boom tip height is 172.6 feet. 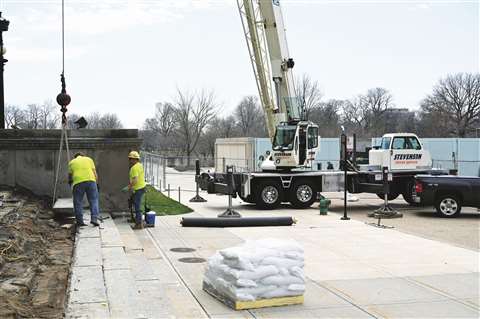 Stevenson Crane Service dispatched its Terex T-340 to the Museum of Science & Industry in Chicago to repair and replace granite stairs at the museum.

Grove has launched two new truck cranes in the past three years, the latest being the new 40-ton TMS500-2, which debuted last summer at the company’s Crane Days event.

“We saw a strong demand from our dealers, and the market in general, for a lightweight, versatile truck crane with excellent taxi capabilities,” said J.J. Grace, product manager for truck-mounted cranes at Manitowoc. “We took that sentiment into account, and the TMS500-2 is the result.”

The TMS500-2 gives users a lightweight truck crane that can quickly travel to jobsites without additional loads, making it perfect for housing jobs, steel erection and HVAC work, Grove said.

“Truck cranes have purpose-built carriers that perform better than boom trucks on construction sites,” said Martinek. “They are also perceived as being more stable and stronger throughout the load charts.”

“Where there is an overlap in models and capacities, most fleets have both truck and all terrain cranes,” he said. 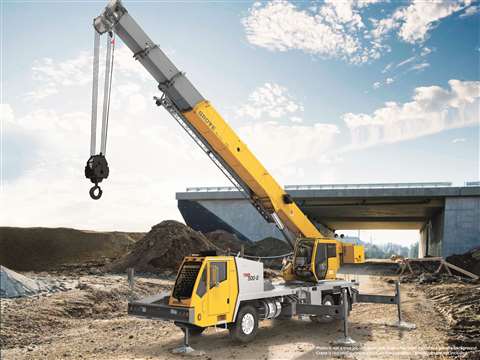 The latest truck crane on the market is the 40-ton capacity Grove TMS500-2.