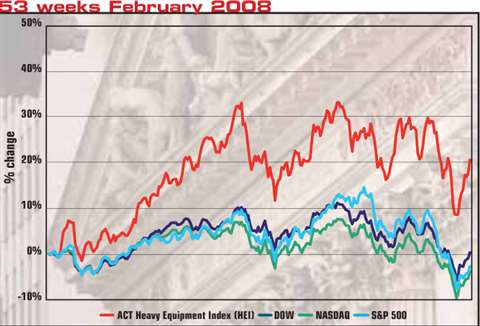 January is seldom a good month for the markets, but this year they suffered one of the most brutal four weeks of trading ever seen. Relentless falls saw all the gains accrued by the mainstream indicators over the course of 2007 wiped-out in less than two weeks, and it was only two big interest rate cuts in the space of the week that halted the nose-dive.

The Fed's action was certainly remarkable – cutting 0.75% off the cost of money following an unscheduled meeting, only to chop another 0.5 percentage points following its scheduled meeting the following week. The bounce this caused is apparent in our graph, which runs for 12 months from the end of January 2006. The sharp upturn in the last few days covered was due to the Fed's cuts.

The result of this is that the Dow, for example, recovered about half the ground it lost earlier in the month, and on a rolling year basis it is about flat. The NASDAQ and S&P 500 have not recovered to the same degree, and are still down on their positions a year ago. Worst off is the NASDAQ, which is 4.23% lower than it was at the end of January 2007.

Curiously, the heavy construction equipment sector is holding its ground surprisingly well. The theory with this sort of 'cyclical' stock is that they rise sharply when there is an economic up-turn, but sink like a stone at the first sign of a downturn. They are usually expected to fall much further and faster than other shares and indicators.

The sector has, of course, lost value over the course of the month and it also enjoyed the recovery. But while the best-of-the-rest in the form of the Dow is level-pegging with its position 12 months ago, ACT's Heavy Equipment Index is still more than 20% higher than it was a year ago.

But before anyone gets too excited – no, this doesn't mean that the economy's not slowing. Commerce Department data shows US GDP grew by only 0.6% in the last quarter of 2007 – a sharper rate of decline than was previously expected, and dangerously close to zero or less.

The reason the ACT HEI has suffered less than US indicators is the international nature of the companies in the sector. Caterpillar, for example, the largest equipment manufacturer in the world, saw its sales rise 8% last year, despite a fall of 11% in North American revenues.

So while the US economy may be heading for difficult times, the outlook in the rest of the world remains positive. Any downturn in the US will, of course, have an effect on the economies that are currently driving world growth but results from the likes of Cat show the net effect (for 2007 at least) was positive.