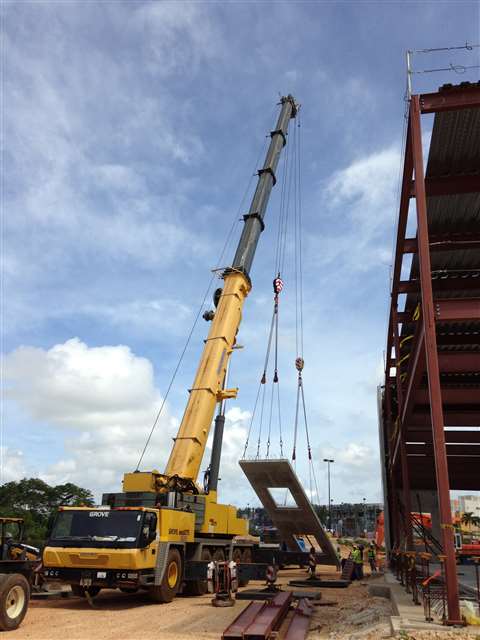 The oil crises of 1973 and 1979 led to a period of stagflation (high inflation rate, slow economic growth, high unemployment rate) in the U.S. and greatly hampered the crane industry. Meanwhile in Germany, a handful of companies were experiencing success with a new idea – the all terrain crane.

Demag, Liebherr, Krupp and Faun spent the 1980s concentrating on combining longer booms and larger capacities with carriers that could hit the road at highway speeds. The all terrain crane quickly became a staple of European rental fleets, and Germany itself represented a huge share of the global market.

While the United States battled financially trying times, the German manufacturers faced their own challenges marketing the new concept on American soil. Road laws are significantly more lenient in Germany as far as the amount of weight an axle can carry goes. Throughout Europe, 12 metric tons per axle is pretty standard. In the U.S., it’s much more complicated, varying by state and even county in some places.

Another issue with bringing all terrain cranes (ATs) to North America was cost. ATs are substantially more expensive than other mobile truck cranes and throughout the 1980s the German Deutsche Mark was considerably stronger than the dollar. This disparity paved the way for the used AT market in the U.S. Two or three-year-old ATs could be purchased for a lot less money yet still provide the benefits of German innovation and technology that American manufacturers weren’t yet offering.

By the Nineties, the recession fueled by the oil shocks of the 1970s was over and American manufacturers started to get into the game. Grove acquired Krupp Mobilkrane GmbH, including their domestic business, Krupp Cranes North America, in 1995. Of course Manitowoc later purchased Grove in 2002. Terex acquired Demag in 2002 as well.

In 1990 Tadano of Japan acquired Faun, which specialized in manufacturing the carrier, or the lower portion of the AT. Japan had its own flourishing AT market at the time and Tadano capitalized on an opportunity to get into the European and North American markets by expanding their manufacturing processes.

“The Tadano acquisition of Faun accelerated our entrance into Europe,” said Ron Dogotch, vice president of sales, Tadano America. “The new manufacturing facility reduced a lot of the freight costs associated with bringing supplies over from Japan. Most of the component suppliers of AT cranes were already in Germany anyway, so it made a lot of sense.” Tadano ATs are still manufactured in Lauf, Germany, a little town outside Nuremberg, as well as in Japan.

“The Tadano philosophy was to provide a superior product both in quality and in the purpose of the crane, boom length and lift capacity,” said Dogotch.

The AT market has pulled even with the rest of the mobile truck crane market, according to Dogotch. The machines may still cost more, but the return on investment seems to be worth it.

All terrain cranes range from three axles all the way to nine axles, with the seven-to-nine axle machines used predominantly in Europe. The four-to-five axle range is the heart of the North American market. These are the machines that compete head on with domestically built hydraulic truck cranes. They possess 130- to 275-ton capacities and that’s the majority of what Tadano sells here.

Last year included deliveries of an ATF110G-5 to TNT Crane & Rigging in Houston, TX and one to JMC Equipment Limited in Alberta, Canada. Sims Crane and Equipment Company of Florida took delivery of an ATF130G-5 and an ATF220G-5. Consolidated Crane Company in Houston scooped up an ATF220G-5 as well.

A wide breadth of work

Tennessee-based Link-Belt manufactures two ATs, the 210-ton ATC-3210 and the 275-ton ATC-3275. Mike Phillips, president of Phoenix Crane in Atlanta, recently bought his third ATC-3275 since 2013. He’s particularly drawn to the luffing jib attachment offered, which allows them to get an extra 10-15 feet of boom just by flipping a switch.

“We wanted to make a purchase before the end of the year and Link-Belt had the machine available,” said Phillips. “For us, that’s the most popular size. In Georgia with the Department of Transportation laws restricting what you can put on the roads legally, that’s the largest model we can work with.”

He added that some of his competitors have larger ATs in their fleets but Phoenix doesn’t aspire to get into that particular market. They’ve got plenty of work for their ATC-3275s.

“We do a lot of work with heating and air conditioning contractors,” said Phillips. “We do work in industrial plants and we also have developed a good relationship with the rock quarry industries in Northern Georgia and Alabama. The tentacles of Stone Mountain on the East side of town reach far and wide. The amount of rock under there is enormous.”

Phoenix Crane is tasked with lifting rock crushing equipment like jaw crushers in or out of the quarry when they’re in need of maintenance. That equipment takes a lot of wear and tear and if it breaks down it has to get back online as soon as possible. It’s often around-the-clock work. Phillips says it’s good work, albeit a little bit dirty.

“We’ve been very blessed with a good bit of work for that machine and we’ve made the most of it,” said Phillips. “We consider ourselves to be relatively creative to make the types of cranes we have work for the applications out there. The ATs are versatile and lend themselves to that kind of work.”

Phoenix Crane has a great relationship with Link-Belt. Phillips said if they have problems, they frequently get same day answers and solutions. When they need someone onsite, their dealer, Atlantic & Southern Equipment, can be there in a jiff. That’s not always something you can get with a European manufacturer, he said. Link-Belt even loaned Phoenix a dolly for three weeks free of charge when Phoenix didn’t have one to spare.

“When we bought our second ATC-3275, Link-Belt provided the dolly for us because we couldn’t get one in time,” said Phillips. “That made a big difference. They didn’t have to do that but they did. We were dead in the water without it. Link-Belt took care of us on that.”

Gilley Crane of Tennessee recently took delivery of one of Terex’s new Explorer series cranes. Their 245-ton Explorer 5800 was purchased because it was time to expand and move up a weight class. They started eying the crane back at ConExpo 2014 due to its versatility.

Since they received the machine they’ve been using it for everything from placing dog houses to bridge beams and cell phone towers. Their flashiest job was probably their recent work at the Jack Daniel’s Distillery in Lynchburg, TN. They lifted two boilers weighing more than 100,000 pounds each. It required lifting each boiler twice at a 28-foot radius.

“One of our biggest things with this crane was having a five-axle machine that can get 334-feet in the air,” said Scott Peterson, project manager, Gilley Crane. “The 5800 is the first crane out that you can get that kind of reach out of it and still drive down the road due to weight restrictions. Terex has kind of opened a new market with this crane.”

Peterson sees the whole line of the Explorer series taking off.

“They’re throwing a lot of capacity into a compact unit,” he said. “It’s capable of keeping up with two engine cranes and we’ve got real close to a 265-ton capacity crane that’s smaller and more fuel efficient. We’ve been very pleased with everything about Terex.”

The 5800 is the largest of the three cranes in the Explorer series. The 5500 boasts a 140-ton capacity and a main boom length of 197 feet while the 5600 has a 180-ton capacity and a 223-foot main boom length. The one-engine concept on all three cranes was designed for minimized operational and maintenance costs. As the strongest and most compact all terrain crane over the entire working range and class, the Explorer 5800 packs a punch.

In New York City, Cranes Inc. has been riding the AT market into 2015.

“Frankly, this was one of the few segments of our fleet that did not suffer all that much during the recession,” said Rob Weiss, vice president, Cranes, Inc. “Regardless of the amount of new construction, there is always a need to replace heating and air conditioning units on buildings throughout the city, and AT cranes, with their ease of movement and rapid set-up, are the perfect tools for this type of in and out work.”

According to Weiss, there’s a new phenomenon that has increased the demand for ATs: the use of these cranes on longer-term building projects, particularly for steel erection. Whereas lattice boom truck cranes were typically utilized for this work in the past, the cheaper transportation costs and quicker mobilization times offered by AT cranes have made them a game changer, in his opinion.

“Due to building heights in New York City, boom length has always been a crucial factor in choosing which models to purchase,” said Weiss. “Our newest crane, the Liebherr LTM 1300-6.2, is the replacement for the venerable LTM 1250-6.1, which was always one of the most popular cranes in New York City. What made that crane so special was that it offered the best of both worlds: on the one hand, it provided all the benefits of a taxi machine with swing-away jib; on the other, it offered a luffing jib for reaches only a larger crane could achieve.”

With the LTM 1300-6.2, all of the advantages of its predecessor have been maintained, but in a crane that boasts a much longer 258-foot telescopic boom and a load chart with far superior capacities. It has a maximum lifting capacity of 661,400 pounds at a 10-foot radius and a boom length of 256 feet.

One or two engines

There’s a lot of new technology and products in the AT market. Many of them are driven by EPA and European rules on emissions. Cranes have had to be redesigned to accept the new Tier IV interim or final engines and frames then needed to be redesigned because additional exhausts elements added weight to the cranes. Some manufactures like Liebherr and Manitowoc/Grove are going to single engine designs which can alternate between using a lot of horse power during mobilization and less horse power while on the job.

Manitowoc/Grove’s range of GMK models spans 55 tons to 550 tons. Their newest offering in the five-axle class is the GMK5275. With a 223-foot, seven section boom and a luffing jib attachment, this crane competes with the very best of the AT market.

“Every time someone buys a crane they have to determine whether that crane makes sense for their region,” said Ingo Schiller, senior vice president, Manitowoc. “AT’s are extremely versatile machines. They’re certainly not recession proof but they tend to stay busy because they’re not just used in construction, they’re used for maintenance, modifications and more.”

The AT market is alive and well in North America, and with no shortage of HVAC units or rock quarries, the demand for these machines is not likely to fade anytime soon.