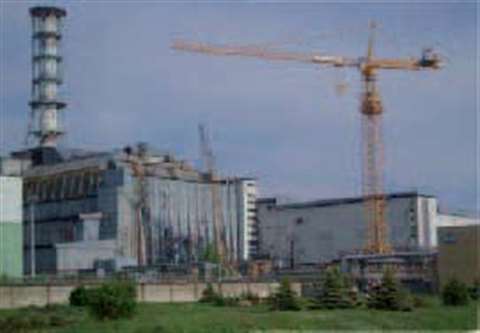 Run by remote control by operators located in an anti-radiation shelter some 328 feet from the site, a Potain MD3200 is working at the Chernobyl nuclear plant in Ukraine. The crane has a maximum load

Operated by remote control, a special application Potain MD 3200 towercrane is working on the reinforcementof a collapsing wall at the Chernobyl nuclearpower plant in Ukraine, the location of an in famous nuclear accident some 20 years ago. Two large beams that have been supporting the roof of the building are resting on a structurally unsound wall of the plant's Reactor 4. The MD 3200 is being used to lift steel elements toreinforce the wall.

Owned by a contractor based in Kiev, Ukraine, the MD 3200 is being run by operators who are located in an anti-radiation shelter some 328 feet from the reactor. Cameras attached to the crane allow the operators to monitor lifting operations and feedback screens show the precise position of the load. The MD 3200 is able to travel to and from the power plant wall on a 49 foot wide, 328 foot long track.

“To operate a tower crane of this size, from a remote location, and on such a sensitive project requires incredibly close control, both on the part of the operator and the crane,”says Gerard Vezant, sales director for special application cranes at Manitowoc Crane Group.“The planning on this job has been particularly involved, which is understandable given the location.”

The operation at the historic “melt down”Chernobyl site is a showcase of engineering excellence, both in terms of the abilities of the crane and of the capabilities of remote controls systems. Remote control technologies are also being applied to a range of hazardous lifting applications throughout North America.

A bulk material handling plant contracted Canada-based Custom Controls with a tough challenge. The company had a flat-bottomed silo that had been condemned as unsafe and was scheduled to be dismantled. The problem was that it was full of material. Normally a crew of men and a skid-steer would go into the silo and dean it out. However, because it Jiad been declared unsafe, no one was allowed to enter.

The company wanted to know if it would be possible to install a remote control onto a small bulldozer. Engineers at Custom Controls, located in Abbotsford, BC, were sure they could handle the project, which was further complicated in that the machine was a rental unit, meaning they couldn't alter it in any way and the installation had to take place over the weekend.

The job was completed after a 150 ton capacity crane gently lowered a John Deere 550G bulldozer through the roof of the silo while the dozer operator dangled above and began to push the material into the outlet. After two days of work the silo was empty, the material loaded onto trains and shipped to a customer, saving the plant $150,000 in penalties, Creamersays. Custom Controls specializes in electro-hydraulic controls for mobile equipment, using radio remote controls.

“This was by far the most fun project we have ever taken on,” Creamer says. “If you played with remote control cars and Tonka toys as a child I am sure you will understand.”

Live-line work by power companies is an area in which remote control technology has been embraced. These companies often use boomtrucks as cranes and man lifts. Live-line work involves the operator wearing a special suit connecting himself into the circuit of the power lines.

Custom Controls had a distributor contact them about retro fitting a radio control systemon its boom trucks. “The power company had specified that the radio transmitter was to come from Omnex Controls,” explains Creamer.“They had worked together to ensure the radio would be safe from any electrical interference. One of the tests included intentionally arcing 350 kV (350,000 volts) to the radio transmitter.

This is a worst-case scenario and at no time did any unwanted operations occur.”

Custom Controls worked with Omnex on the project. “This ensured that integrating the radio with our Tecnord electro-hydraulic actuators would be a snap. The actuators were installed onto the crane's existing cross rods. We supplied a separate electric power unit to provide the hydraulic pressure necessary to operate the actuators so there was no need to break into the crane's existing hydraulic circuit and ensured the crane could be operated manually in case of an electrical failure. Additionally the electric pump is used as an emergency backup to allow the crane to be lowered in case of a main hydraulic failure.”

Creamer says that the live-line project was intimidating and challenging but that it also gave the Custom Controls team a great deal of self satisfaction. “Knowing the application and the potential for horrible consequences if something went wrong, extra precautions were taken to ensure that the system was going to be safe,” Creamer explains. “We are proud of the fact that we provided the operators a safe, reliable and smooth remote control that allowed them to work with confidence around high voltage power lines and that with each subsequent tender our system has been a non-negotiable item in the bid.”

Celebrating its 35th anniversary this year, Bradford, PA-based Control Chief continues to provide a broad spectrum of wireless controls solutions. Brian Landries, outside salesmanager, has been with Control Chief since 2003 and coordinated and is now selling the new Control Chief LJ45.

“The US [overhead and material handling] crane market has not seen a significant increase in new crane sales and/or installations [of remotes] in several years,” he says.“Instead, many US crane manufacturers have incorporated a 'modernizations' program which provides the latest upgrades and serviceto existing crane installations.”

Landries says that to participate and offer wireless technology to the lifting market it is important that Control Chief has access to solutions that make sense, which is the reason for the introduction of the Advantage Series LJ45.

“Control Chief will be using a three-phase introductory approach to offer our customers the LJ45 technology to meet their application demands,” Landries says. “It was very important to allow our existing customer base the benefits without having to incur the expense of replacing their systems. Our Phase I upgrade program will allow our customer base that is currently using our MDR8400 or Command Chief PLC-based solutions the capability of upgrading their crane control systems with the latest technology without having to stop production on the crane for an extended period of time to replace the receiver.”

The estimated upgrade time for an LJ45 system is less than 15 minutes, Landries says.

An example of the ease of Control Chief'supgrade introduction is the story of a metalservice center customer that has more than 50 radio remote control systems. Many of the systems are more than 15 years old and use Control Chief MDR8400 systems with the previous TK4 “bellybox” transmitters operating in the 72 MHz radio band.

“We are currently in the process of upgrading all 50 systems to the LJ45 transmitter at 450 to 470 MHz,” Landries says. “This upgrade process includes a simple user swap-out of the radiocard inside the receiver panel and installation of the new antenna. This solution proved to be a perfect fit for this particular customer because as with most of our customers, crane downtime means lost dollars. Also, this customer will now be able to update all 50 cranes by the end of this year as opposed to replacing entire systems, which fits better with their budget.”

Landries says Control Chief is developing a new Advantage Series receiver, which will incorporate the LJ45 as its primary control operator. This receiver technology will include the option of a licensed or unlicensed system, duplex communication capability and a modular design for ease of maintenance. The second phase is scheduled to be completed by the first quarter of 2007, he says.

The market for remotes has been stimulated by the need to operate cranes in hazardous situations, Landries says. “One of the big reasons for purchasing these controls is to operate equipment where you don't necessarily want to operate equipment,” he says. “We have many clients in the steel industry and you don't want your operator near the molten steel, you want them in a cab or in a safe place away from the heat.”

In terms of the market for control sales, Landries' says his company's forecasts for 2006 were and continue to be very promising.