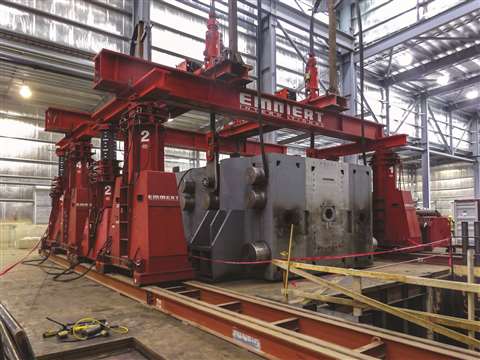 Emmert International created a unique and creative rigging plan to install press components at a fully functioning plant in Illinois. When complete, the press will be the largest in the Western hemisphere.

The press is comprised of three base sections, one Platen and two Krowns. All three base sections were assembled into the single heaviest lift of 1,627,096 pounds. The Platen was the largest single piece and the upper Krown was the tallest set of all the lifts.

“It was critical that the regular plant shipments were not impeded by the delivery and unloading of the press components,” said Terry Emmert, president, Emmert International. “It was strictly prohibited to interfere with any of the plant operations during all phases of the press installation.”

The standard way to install a press is for each section, one at a time, to be lowered into the foundation pit utilizing a large crane. Emmert proposed that the three-section base be assembled in front of the foundation pit. Once assembled, the base would be lifted as one component. The customer reviewed the plan and decided to go forward. Emmert designed custom rods and lift links to attach and lift the fully assembled base.

The Krown had to clear the vertically installed columns during the lift and set. This required the tower/strand jack system to lift the Krown to the roof line of the building to clear the bottom of the four columns. Emmert developed a rigging configuration that would allow for maximum lift with minimal overhead obstruction. Emmert also designed low-profile umbrella strand holders to overcome the foreseen conflict with the roof structure. The fully lifted Krown cleared the top of the columns by four inches. The top of the lifting system cleared the roof by six inches.

As the components arrived at the job site, each piece was offloaded utilizing a 450-ton gantry, loaded onto a 12-line Goldhofer PSTe and moved 100 yards into the press assembly building. Each section was removed from the transport trailer using a 700-ton gantry system. The sections were lowered onto a turntable to be spun for assembly. Each piece was lifted again via the gantry and placed in a precise location for the base section mating and dress out. Once the three base sections were positioned and mated, plant personnel dressed out the base sections with essential keys and tie rods. The fully dressed base section was set in one piece. It weighed in at 1,627,096 pounds, had an overall height of 12 feet seven inches, a width of 22 feet eight inches and a length of 33 feet four inches.

Utilizing the 700-ton gantry, the 645,000-pound Platen was lowered onto trunnion stands and rotated into the installation position. The 700-ton gantry system was repositioned to allow for loading, gantry travel and installation of the Platen above the previously placed base sections. Four bushings were installed into the Platen, one at each corner. The Platen had to be lined up over the top of the columns and lowered down onto the column resting point. Each column had five millimeters of tolerance.

The Krowns were offloaded using the 450-ton gantry system, loaded onto the PSTe transporter and moved into the press assembly building. To install the final two Krown sections, Emmert designed a lift configuration utilizing 20-foot structural tower sections as a base. On top of the tower sections was an elevated 450-ton gantry system, gantry track sections, support beams and strand jack system. Each Krown was then attached to the lift system using lift cables. The lower Krown was lifted first to an elevation determined to properly travel the 37 feet three-inch distance and lowered over the previously installed press columns. The upper Krown was then moved into place.