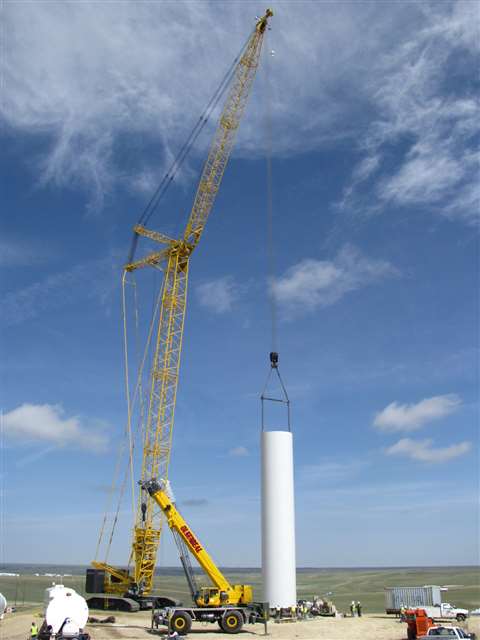 A Kobleco SL6000 erects a wind tower base section.

Crane manufacturers and contractors are poised to help drive the next big wave of wind energy construction. Jeff Hampton reports

With what most observers agree was a down year now in the rearview mirror, the U.S. wind energy industry is looking for renewed vitality with the help of a strengthening economy and widespread public support.

And the businesses on the front lines of wind farm construction are gearing up with new equipment and strategies to get turbines off the ground and turning.

The U.S. wind industry closed out 2010 with 5,115 megawatts of new wind power built, or roughly half of the record construction of 2009, bringing the total nationwide to 40,180 megawatts.

That is a 15 percent increase from 2009, but not enough gain to keep China from surging ahead for the first time with 41,800 megawatts in operation - a 62 percent increase according to the Chinese Renewable Energy Industries Association.

The start of 2011, however, saw more than 5,600 megawatts under construction in the United States, and crane manufacturers and contractors are poised to help drive the next big wave of wind energy construction. That wave, as predicted a year ago, includes taller towers and heavier nacelles.

"Any time we're developing a new model, we look at the wind industry as one of the applications," says Jerry Maloney, global product director for Manitowoc.

The company has developed a special wind attachment to handle heavier nacelles at the 80-85 meter tower height - the height that has been the standard so far. "The attachment has increased the lift capacity by 49 percent," he says.

With more 100-meter towers being erected in North America now, Manitowoc is developing an attachment for the 16000 that will put more boom in the air and facilitate work at that height.

Maloney says the 18000 - a 600-metric ton crane - has been active in the market too, but the 16000 is still the workhorse. "It's easier to maneuver around the sites, and easier to assemble and disassemble. Time is money in the wind industry."

Ever-larger cranes will be needed if off-shore wind development becomes a reality.

"We'd have to go up to a 2,000 metric ton machine to lift the 5 megawatt nacelles that weigh 250 to 400 tons," says Maloney. "That's a little tougher work environment too, requiring cranes on jack-up barges."

But as the wind industry matures, inland work sites may become more challenging as well.

"A lot of the easy job sites have been taken," says Maloney. "Work environments will get tougher and tougher."

Frank Bardonaro, vice president and managing director of Terex Americas Cranes, says that roughly 10 to 15 percent of his company's new sales are related to wind work, with 40 percent of its product fleet applicable to the wind industry.

"A lot of our customers feel they are seeing a lot more activity in bidding for work now," he says. An uptick is expected in 2012 and 2013, with a continued need for equipment to handle taller towers and heavier components.

"There are more towers in the above-100-meter class and we're developing new technology to meet that demand."

Bardonaro adds that there is also more wind energy generation being developed at higher altitudes - as high as 15,000 feet - and that has created demand for cranes that can generate the horsepower required to operate hydraulic systems in that thinner air.

"We have developed equipment that can maintain full function at those altitudes," he says. "We're working with the major players to find out what they're needs are - not just for now but for the future."

Jack Fendrick, vice president of Kobelco, says it will take a lot of new construction to end the glut of cranes in the wind industry.

"A lot of capacity has been sitting since 2008, and some of that is starting to go to work now," he says. "The industry has to continue at the current pace for another nine months before there will be any new movement of cranes."

With 70 percent of the towers being erected still topping out at 80 meters, the Kobelco 6000 will continue to be the company's primary product for the wind industry.

Fendrick says that in his opinion the future growth of the wind industry is still uncertain. "At the end of the day, wind energy does not exist without subsidies," he says. "It's just not cost effective otherwise, and that's always a concern over the long term."

Meanwhile, the rest of the crane business is doing well, he says.

"We're forecasting a 10 to 15 percent increase in the crawler crane business in 2011, and we're hoping to see an increase over that in 2012. But it will be nothing like in 2008. That was an anomaly. Every market in the world was up," he says.

Georg Diesch, president of Liebherr Cranes, believes the wind business will improve in 2011, but it won't be easy.

"Our customers with the most experience and the right equipment will benefit most, but fierce competition dominates the market. Rental rates are still not satisfactory and too many competitors bid on to less projects," he says.

Of the construction that is under way, the trend is toward taller towers, and Diesch says Liebherr is ready to serve that market.

"Most of our cranes can easily do the 60 meter to 100 meter towers with or without derrick systems, but even for the 120 meter towers we offer several cranes capable to do the job," he says.

"For instance, the LR 1600/2 with its very versatile boom system is built for this kind of job but naturally needs a derrick for this height."

"In addition, it's not only the height of the towers that matters but also the output," he says.

"Currently the 1.8 megawatt turbine is standard but with more height the 2.5 megawatt is going to be the new standard in the near future. That means higher and heavier."

Out in the field, crane operators are finding the landscape more promising than last year, although not without the questions and concerns shared by manufacturers.

Last year wind energy made up 50 percent of Turner Brothers' crane operations, but with the wind sector slowing and new growth in the industrial sector, wind has dropped to 25 percent of their business. That doesn't mean that they aren't still very active, or not prepared for future growth.

In 2009 Turner Brothers acquired an LTR 11200/9.1 to use at wind farms as well as for industrial applications, and in 2010 they acquired the crawler version.

Both have been and will continue to be used for wind construction among other applications.

The crawler - which is just 16 feet wide - is especially beneficial at sites on the East and West coasts where the terrain can be hilly with more trees and growth.

"There's a limited amount of space and the roads need to be narrow," says Cowley. "There's also the need to restore the property once the construction is completed, so the less disruption we make, the less cost there is.

Cowley confirms that they're starting to see more towers in the 90 to 100 meter range, and towers are being tested up to 120 meters. "That requires different configurations for larger cranes."

A new point of interest for the wind industry right now is the potential impact from the damaged nuclear power plant in Japan.

"Last year interest in nuclear energy was warming back up," says Cowley. "With the situation in Japan, I believe it will set nuclear energy back. There'll be a refocus on renewable energy."

Time is money for wind farm developers, and more than ever they're looking for contractors with the expertise and flexibility to work quickly and safely at a site. This has led a traditional rental company like Barnhart Crane & Rigging to operate as a full-fledged contractor for the wind industry.

Jeff Swanson, senior vice president of Barnhart Renewables, says their work is evenly divided between installation and maintenance. He defines the latter as "large component change-out," including gear boxes and blades.

While Barnhart has plenty of its own equipment to deploy on wind projects - including two Terex Demag CC2600s and a CC4000 - the need for mobility and speed has them renting equipment too.

"Eighty percent of the time we're renting cranes from other companies," says Swanson. "We do that for quick mobilization in locations such as Canada and Mexico."

Barnhart is also engineering new maintenance methods that don't require cranes. For example, they're using a wench on the ground and a nacelle attachment to change out blades.

Swanson says the company is much busier so far in 2011 than in 2010. "We're doing more maintenance, and we made a decision to spread out our geography," he says.