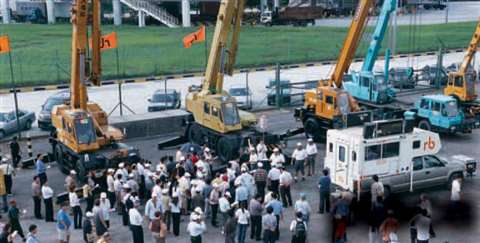 Often, as many as half the registered buyers at US auctions are from foreign countries. It's also common to find US buyers at auctions around the world, such as this Richie Bros. auction held in Singa

The paradox of auctioning equipment is that when the economy is bust, the business of dealing in used machines is robust. The logic is that companies that need good, solid equipment with quick turnaround at affordable prices during an economic slump have that option within used equipment. Interestingly, the US and world economy has been strong the last few years, and so has the business of auction companies. Fueling the growth of auctioneers has not been a edging economy but a strong one, with a shortage of new equipment due to manufacturer backlogs creating a huge market for used equipment. Hence, many companies looking to enhance or expand their feets have options. Auctions, the glorified garage sale for the big boys needing bigger toys, are plentiful year-round, servicing those looking for the better deal.

Many auctioneers pride themselves in reputation through business and by the services provided before and after auction events. From the auctioneers that ACT spoke with, most if not all companies have resources that will hold an auction anywhere nationally or least within a 10-state epicenter of the company's main office. Also, most credible auctioneers have impressive advertising campaigns that list specifically what equipment will be sold of and when. Most of the larger auction companies provide time for prospective buyers to inspect the equipment being sold to assess beforehand its condition and value. After a purchase, many auctioneers will offer transport options for the equipment sold.

The largest of companies auctioning construction equipment appears to be Ritchie Bros. Auctioneers, which began in 1963 in Kelowna, British Columbia, and has more than 110 locations and owns 33 auction sites. Last year, the company announced a record with $2.72 billion in gross auction sales, a 30% increase from 2005. And it worked hard for it too: In 2006, the company handled more than 32,000 consignments that totaled more than 240,000 lots sold. Internationally, the company fared similarly with record-breakers in Spain, Italy, Australia and Mexico.

Ritchie's bidding practices are a strict unreserved auction, which means that it goes to the highest bidder on auction day. All bidders must register before entering and are issued a bidder registration card, which they ash during the auction.

At an auction held by the company in the Bay Area last April, San Leandro businessman Reid Settlemier flashed his card just in time to secure a Liebherr 900-ton crane for $3.7 million, a crane his company, Bigge Crane & Rigging, needed to use on the Richmond-San Rafael Bridge retrot project. The record sales price for the five-year-old crane provided fodder for conversation among crane owners for several months.

However, there are other auction companies that are smaller in scope but can still attract prime equipment. Bunch Bros. Auctioneers, of Wingo, KY has been in business for 22 years, but began auctioning of material goods in 1999. Originally a real estate auction company, they saw the need for the selling industrial and construction related equipment. They still try to limit themselves to owner auctions but hold a few building consignments each year. Recently, the company held its fall auction at the Kentucky Fair & Exposition Center in Louisville. Auctioneer Steven Bunch says he has found that whether an auction is in a metropolitan area or “knuckles junction,”people will come if the event is well advertised and listed.

Bunch admits that last year wasn't his record-breaker, but overall seemed please with the company's results, stating that when a company limits itself to a certain region, it's more difficult to compete with the big boys. The Louisville sale brought in $3 million, he says, and attracted 500 registered buyers from 20 states. In general, the company can and will hold auctions on home turf-Tennessee, Indiana, Missouri, Illinois and basically “if the size of our auction is big enough we'd go anywhere,”says Bunch.

When asked why there is currently a demand for used equipment, Bunch says the educated buyer knows when there's a deal and whether the piece of equipment is any good, and if it requires a little repair to get it operable, so be it. For one, buyers sometimes can't wait for the time lag a new piece of equipment will take because of an upcoming job that will start soon. Secondly, a lot of good deals are to be had and the equipment can be in the buyers' hands as soon as the check is handed over. As is the practice with other auctioneers, Bunch has an open-door policy, inviting potential buyers to come check out the equipment to be sold. All the goods are categorized through company information, with as much specific detail about the product as possible.

Peter Clark, president of Yoder & Frey, agrees with this assumption. The company, which has specialized in the auction of heavy construction equipment since 1964, says that high quality machines continue to bring in good prices. This month, the company is holding its annual Original Kissimmee, Florida Auction, which brings in buyers from each of the 50 states, as well as 40 countries. During an eight-day stretch, around 10,000 pieces of new and used heavy equipment, trucks and trailers are auctioned off Last year, the company sold $80 million, with 22% of that figure going out of the country.

Among the equipment he views that is in high demand would be hydraulic rough terrain cranes and boom trucks. But with manufacturers eager and able to turnaround product in lesser time than before, will the need for used equipment wane? Clark says that like construction materials, if the product's readily available, the need won't be as strong. But he emphasizes the point that if new material isn't readily at arms length when needed, then the used equipment market is hot.

Although the Internet and e-business hasn't exactly revolutionized the way auctions work, it certainly hasn't hurt. Many companies are now using the Internet as a medium for auctioning, enabling buyers to get in on the bidding. As some of the companies have said, such as Ritchie Bros., they allow and have capabilities for buyers to place bids in real time, a good way for the company to upload its unreserved bid policy while ensuring customers a piece of the action remotely. Ritchie reported that approximately 24% of its sales were from online bidders, and Yoder & Frey said that some sales contributed to as high as 25% (the company also accepts absentee bids).

Companies such as Bunch Bros. do not conduct online auctioning, but agree that the Internet has impacted its business, allowing interested buyers to browse what a particular auction would hold, thus generating a greater attendance.

The use of the Internet does appear to be the standard now if an auctioning company wants a strong audience and dollars to match. Typically though, for those who do their bidding online, they still generally send someone to the auction yard to inspect the equipment before bidding. Because most auctions sell equipment as-is, it is smart business to see and feel the product and know its condition before a bid is placed.

However, some argue the value of Internet bidding.

“We don't have online bidding, but for previewing the equipment it has made it much easier for the customer,”says Martin Piela of US Auctions, which held its largest utility auction to date this October in its Wilmington, DE office (the company has two other branches in California). “It makes people aware of prices on what things are worth, which in the past did not occur. Equipment dealers, who knew the value of things, would often make a great deal of profit from a piece of equipment obtained at an auction. So I think that the Internet has hurt the dealers' profits to a certain extent.”

What no one seems in disagreement about is quality-it sells. Every party interviewed stated that as long as a machine has been taken care of and maintained thoroughly, the sales will always be there. Given that, it seems the biggest risk now is the bidder losing the purchase