What are the latest ALL Erection tower crane projects?

ALL Erection and Crane Rental’s tower cranes are deployed at a bridge in Minneapolis, a hospital in Pittsburg and a mixed use project in Detroit.

ALL Erection and Crane Rental is well known for its mobile crane fleet, but the company has a strong tower crane fleet as well. 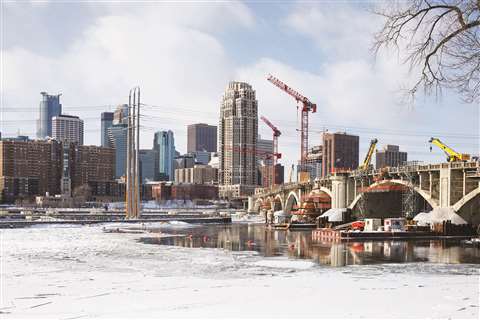 While it’s rare to see tower cranes on a bridge project, they worked at the Third Avenue Bridge project in Minneapolis. ALL provided three Potain MDT 368s and a Potain MDT 389.

In 2022, ALL Erection was the sixth largest tower crane-owning company in North America, reporting 91 tower cranes in its fleet.

The company’s tower cranes have been working on a number of prominent projects, including a bridge in Minneapolis, a hospital in Pittsburg and a mixed use project in Detroit.

The Third Avenue Bridge in Minneapolis is set to officially open in the summer of 2023. Four tower cranes from Dawes Rigging & Crane Rental were used to rehab the bridge, which crosses the Mississippi River and connects downtown with the northeast part of the city.

It’s rare for towers to be used for bridge work in the U.S., but the location precluded the use of barges or land-based cranes, according to ALL. The towers included three Potain MDT 368s and a Potain MDT 389. 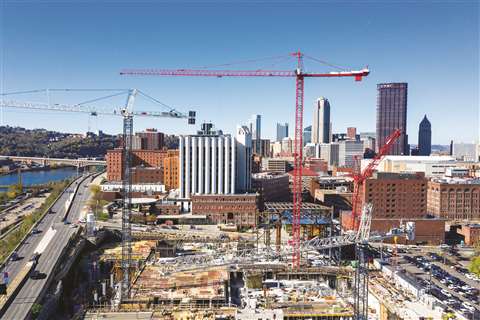 ALL Crane Rental of Pennsylvania and ALL Tower Crane provided lifting services for the $2 billion UPMC Vision Center in Pittsburgh.

Construction of a 400,000-square-foot vision center dedicated to eye health was part of The University of Pittsburgh Medical Center’s $2 billion investment in three new specialty hospitals.

ALL Crane Rental of Pennsylvania and ALL Tower Cranes provided lift services for the project. The cranes were a Terex SK 575 and a Potain MD 610, one of only a few in North America. 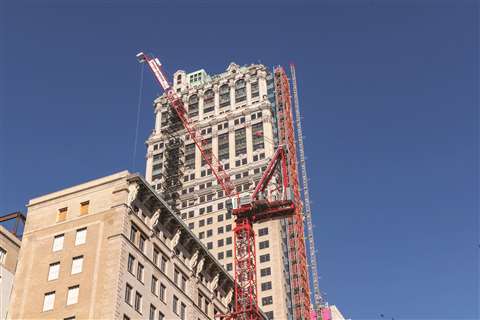 Signs of Detroit’s comeback continue with a massive revitalization project of downtown’s most recognizable high-rise. The 38-story Book Tower opened in 1926, preceded in 1917 by its 13-story companion structure, the similarly named Book Building. Together, both structures are being turned into a mixed-use masterpiece on the city’s burgeoning Washington Boulevard.

Jeffers Crane Service, in conjunction with ALL Tower Crane, both members of the ALL Family of Companies, provided a Potain MR 298 tower crane for the project.

The Book Tower was set to reopen in late 2022 with mixed-use space, including retail, office and residential space. 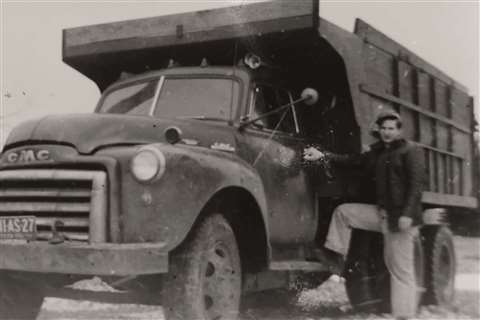 What is the history of ALL Erection?
ALL Erection and Crane Rental is the living legacy of the entrepreneurial Liptak family.