When to use specialized trailers

Specialized trailers come in all shapes and sizes to transport all manner of loads. Now new functions are getting them on the road to sustainability. Niamh Marriott reports.

Though it might seem obvious, the lighter the transport equipment, the heavier a load can be and, with loads continuing to push the limits of mass and weight, transport companies are looking to reduce wherever possible. 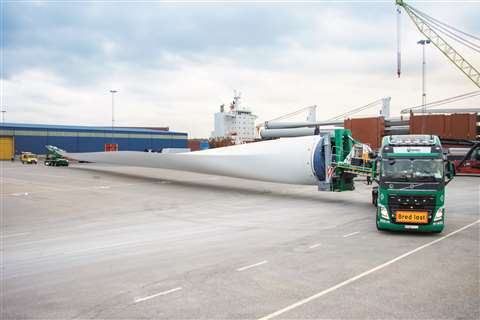 Germany-based Goldhofer notes the trend for lighter weight design in trailers. “We have been able to continuously reduce the deadweight of Goldhofer vehicles.

“Reductions in the amount of materials required or the use of lighter materials are key. The new low-wear polymer deck coating, TraffideckGO, for example, is extremely resistant to environmental influences such as UV light as well as damage caused by the cargo.

“It also has a significantly better coefficient of friction for improved load safety than the rubber linings previously used. And yet it is significantly thinner and lighter, offering weight savings of up to 500 kilogrammes per vehicle.”

Goldhofer has a range of specialized equipment for transport. Its heavy duty module Addrive, along with its software Addronic, can combine “the advantages of a towed heavy-duty module with a SPMT,” says a spokesperson.

Addrive can “meet the most demanding requirements of modern road haulage operations in terms of versatility, tractive force, speed, availability and economics, and avoids the need to transfer the cargo from a road transport vehicle to one or more self-propelled vehicles, which may be necessary several times on certain routes.

“For each switchable drive axle line, Addrive offers tractive force (200 kN) and maximum climbing ability in the train. As the mechanical drive system can be completely disengaged, there is almost no wear in towed mode. Heat build-up is also avoided. Thanks to the integrated multi-combination coupling, various Goldhofer heavy-duty module systems can be used in combination.

Addronic support operations of up to four self-propelled units. The company says the software synchronises basic functions of steering, leveling and driving, and is easy to integrate into a fleet. 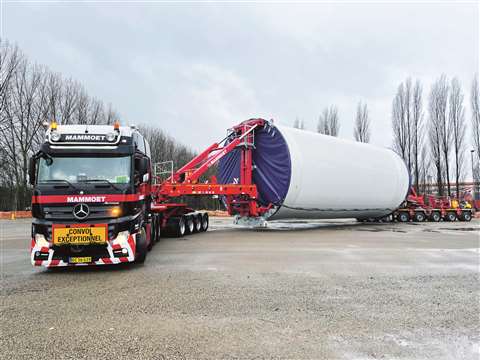 Its towed models, the THP/SL series of heavy-duty modules are used worldwide for transporting heavy loads requiring a high bending moment. With low deadweights, the shortest routes can be used, including motorways and bridges with load limits which would involve detours when working with heavier equipment.

Sustainability is a key conversation this year, with many companies thinking of ways to meet climate targets and reduce emissions. Across the transportation industry, there are big strides to make positive changes.

“We have a number of challenges to face in 2022. In addition to the ongoing pandemic, there are growing other challenges in connection with today’s increased focus on sustainability and ambitious climate change policies,” says a Goldhofer spokesperson.

Goldhofer has also been designed and introducing transport solutions for sustainable equipment. Its latest addition FTV 850 is used to transport wind turbine blades. The transporter can be used in standard three metre width and in split combinations in widths up to 4 metres. Depending on the configuration, even the latest rotor blades can be picked up and transported, says the company, and has high stability on the move.

Blade S, a trailing dolly system for the tip of a blade, is another recent addition to the Goldhofer range of blade transporters. The company says it can lower the overall weight of cargo and therefore reduce fuel consumption and save money.

The larger the wind turbine, the more stable the supporting structure must be. In order to transport the heavy and voluminous tower sections, Goldhofer modified its tower adapters. The new RA 2-110 tower adapters, handle tower sections with a weight of up to 100 tonnes and 6.8 metres long. The extra payload comes from the combination of a front bogie in the form of a four-axle dolly with pendulum axles and a heavy-duty THP/SL-S (285) module as the trailing dolly.

This vehicle concept meets the additional safety requirements specified by the Danish wind turbine manufacturer Vestas. Instead of the usual configuration with two free-turning devices (gooseneck with bogie and trailing module), the new system has only one free-turning device, which is located between the front dolly and the tower adapter. The rear tower adapter is mounted directly on the heavy duty module. Compared with a completely free-turning solution, this concept gives the entire vehicle much greater lateral stability for greater safety, even at high tilt angles.

Launched in 2020, Goldhofer’s self tracking semi lowloaders offer haulage companies an efficient load securing system and a practical range of accessories, says the company. The latest version of Stepstar is now available, with one or two pairs of wheel recesses and the new Mega gooseneck.

It has already purchased its first ultra-wide onshore wind tower clamp set and received three more in the first quarter of 2022.

As developers seek to make the most of wind farm locations, turbines have grown taller to reach stronger, uninterrupted winds. Consequently, the base tower sections of these turbines have widened, from around 4.5 metres just a few years ago to more than six metres today.

Therefore, the towers centre of gravity during transport has risen higher from the ground – as much as 1.5 metres above earlier models, says Mammoet. Beyond 4.5 metres, conventional trailers are considered not stable enough to perform transport of the largest tower models safely.

For these larger tower sections, the only alternative has been to transport them on top of a trailer with hydraulic suspension yet this combination requires crane loading and unloading, is far less manoeuvrable and has a ride height 1.2 metres higher than a clamp solution. This is well-within striking distance of bridges.

This new system, fabricated by Greiner, is installed on turntables between a mixture of an air suspension jeep-dolly and conventional multi-axle hydraulic trailers in the rear, forming a modular vehicle capable of completing narrow sequences of turns without leaving the road surface.

Like other clamp systems, the new system can receive tower sections directly from supports – no cranes are required at any stage of the journey. During projects, it will be used to transport the lower, wider tower sections, while higher, thinner sections will be transported by existing clamp systems.

The new system can transport up to 6.3 metre wide tower sections at lower overall heights than conventional trailers, and is already in active use. As the world transitions to more sustainable energy sources, Mammoet says it will continue to invest in equipment that makes this work safer and more efficient to undertake.

Nooteboom says there been a lot of international interest in the new Mega Windmill Trailer XL in the wind energy market. More than 10 of these MWT-XL trailers have already been sold to the specialized transporters in Europe in the field of wind energy and several orders are expected shortly.

Moving towards sustainable solutions is welcomed by many, but actually moving the equipment to site requires specialist transport, and the industry, it seems, is meeting the challenge. 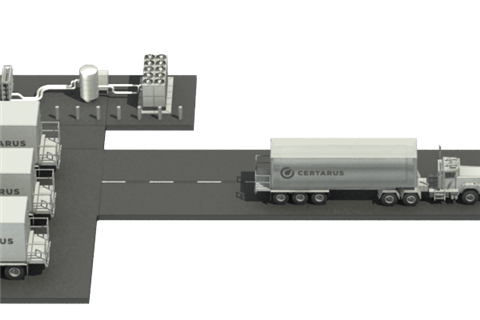 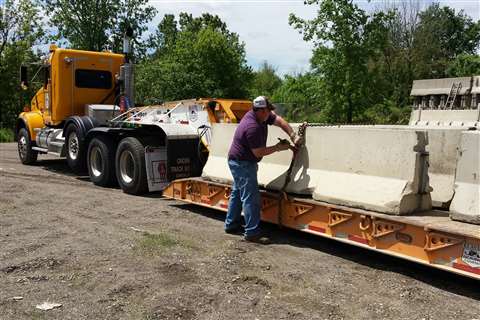 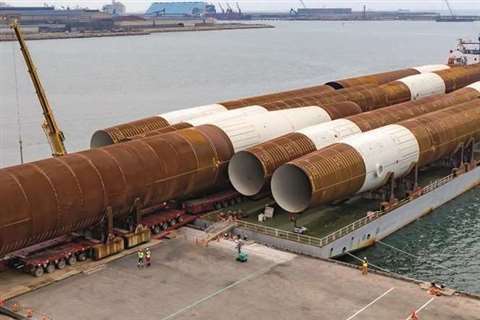