Which cranes are adding sophistication to demolition techniques?

Before getting into details, it is great to be able to start with positive news about a buoyant sector. 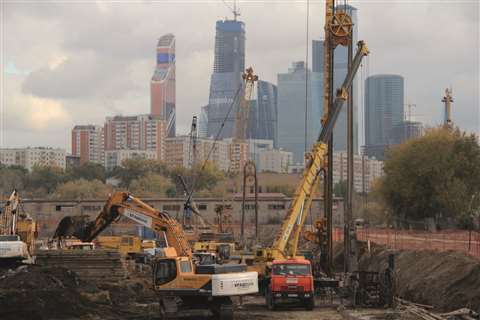 A selection of equipment in the GK Crushmash fleet

Priestly Demolition (PDI) in Canada reports that an increased need for cranes in all areas of demolition is apparent as construction continues to boom in North America. And that applies whether it be civil, industrial, commercial, or residential, the company says. “Because of this demand, we need to constantly upgrade our fleet to support transport and assembly, disassembly and intricate demo work,” comments Ryan Priestly, PDI president.

“We work with our engineers and customers to determine weights, size, radius, heights and locations of what needs to be hoisted. The two pieces go well together – as PDI understands specialty cranes and equipment as well as the importance of partnerships and professional service,” Priestly explains.

In Russia demand for demolition services, especially the big cities, is stable, says Victor Kazakov, CEO at specialist contractor GK Crushmash. “At the same time demand is growing for professionalism and the ability to solve complex tasks, for which the contractor needs specialized equipment,” Kazakov explains.

High altitude dismantling is one example and an increasingly important sector of the industry, in Russia and elsewhere – and cranes are a vital component. Kazakov continues, “We use a tower crane in cases where there is a need for high-altitude dismantling in cramped conditions: this can be both urban and industrial buildings. For example, in 2021, we used two tower cranes for the demolition of a 20-storey hotel in the centre of Moscow. The building was located in a dense development, surrounded by residential areas and therefore the use of tower cranes helped to quickly and safely lower the height of the building for further dismantling with the help of demolition excavators.”

Kazakov notes, however, that “dismantling with tower cranes has a number of limitations and, therefore, in many cases we make a choice in favour of lowering the height of the building with smaller powered plant.

Russian projects
“In Russia to use cranes it is necessary to develop a separate work performance project and the work itself is more expensive for the customer, despite the fact that there is no significant timesaving. Therefore, for us, dismantling with the help of tower cranes remains one of the options but not the main method of work.” 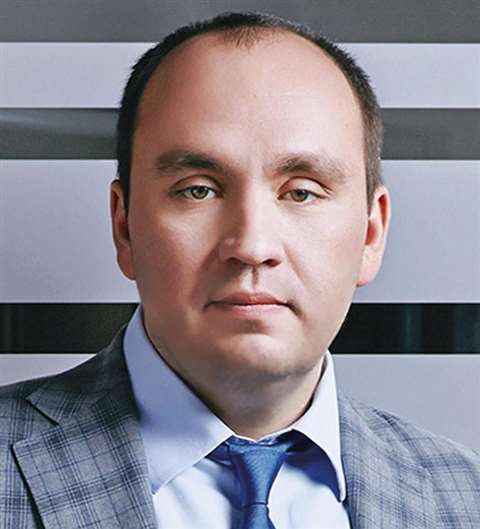 Tower cranes are a crucial part of a high altitude demolition solution called TopDownWay, developed by Italy-headquartered specialist Despe. TDW is a modular self-descending machine adaptable to suit any type of structure, the company says. A key feature is that all the demolished material, including dust and water, is retained within the structure. Operators can work simultaneously on three floors. As work progresses, the platform makes a controlled descent down to ground level.

Parts of the TDW are assembled on the ground before being lifted to the top of the building using a tower crane which can then be climbed down with the building as its height reduces.

Tower cranes were chosen for a job in Canada, by Priestly Demolition. The company says it is always looking for new, and innovative ways to be faster, safer and more efficient in demolition. “Although there are many pieces to this puzzle, one way is to utilise the equipment we have available – to its full potential,” Priestly says.

“Over the years, we have come to rely on cranes to help remove large concrete and steel beams, bridge girders, pedestrian bridges, satellite dishes from high rise buildings, digester roofs and more. When our high reach excavators can’t handle the height, size or weight of a piece of structure, a crane is the next best option.”

The tower job in question was 1 Bloor Street in Toronto where PDI demolished a temporary construction bridge structure to make way for a high-rise building with five floors below street level. Part of this demolition was the removal of numerous 60 foot deep solid concrete mega columns, all located below grade and encased in steel sleeves. The columns were 30 inches in diameter and weighed more than 60,000 pounds. “Our engineering team devised a plan to drill core holes into the columns and rigged using specially designed rigging beams to a tower crane. The columns were then saw cut at the base and safely remove from this busy downtown intersection.” 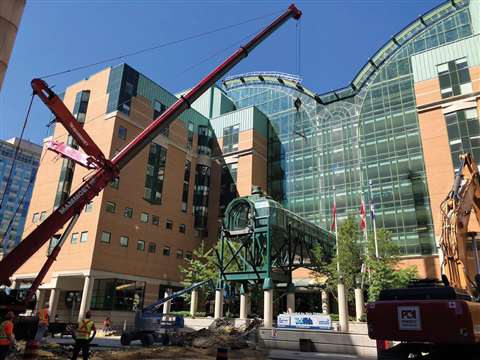 As part of an ongoing expansion at the hospital, the bridge needed to be removed very carefully, in one piece, over both road and water without vibration so as not to disturb the surrounding patient care facilities or anything below. “With pedestrians on the move in yet another busy downtown location, safety was our primary concern,” a spokesperson said, “For this project we used a 500 ton crane to lift the 70,000 pound bridge at nearly a 100 foot radius without any breakage.”

As there was no clean up needed with this type of crane removal, traffic could resume as soon as the bridge had been removed and downtime was minimal.

Another demolition job using a wheeled mobile crane was completed by Wasel in Germany. The specialist in wheeled, crawler and tower cranes, chose a 700 tonne capacity crane to complete two jobs from the same location while under time pressure.

On one hand Wasel’s new Liebherr LTM 1650-8.1 wheeled mobile telescopic crane helped hoist explosive experts up a chimney to a height of 140 metres while it also helped remove façade components from another part of the building at a long radius of 80 metres.

Michael Müllers
Crane operator Michael Müllers had his work cut out having two sites to concentrate on. From its position at the base of the 250 metre chimney the crane hoisted the explosives crew, with their drilling gear and explosives, up to a work platform on the flue at a height of around 140 metres. They placed around 30 kilogrammes of explosives in 140 boreholes. Its great height meant the chimney had to be brought down using a single-folding method.

For the façade removal part of the job a large platform holding a team of workers and the salvaged material was hoisted in full over the neighbouring 70 metre high building. On the other side of the building the same platform was used at radii up to 80 metres. All up, including the safety cage, personnel and the demolition material, gave a gross load of around eight tonnes.

To cope with the long radius, Müllers set the radius of the crane’s slewing platform ballast to its maximum value of 8.4 metres. Working on the chimney where the radius was ‘only’ around 45 metres, the ballast distance was reduced to 6.4 metres using the hydraulic slewing mechanism. 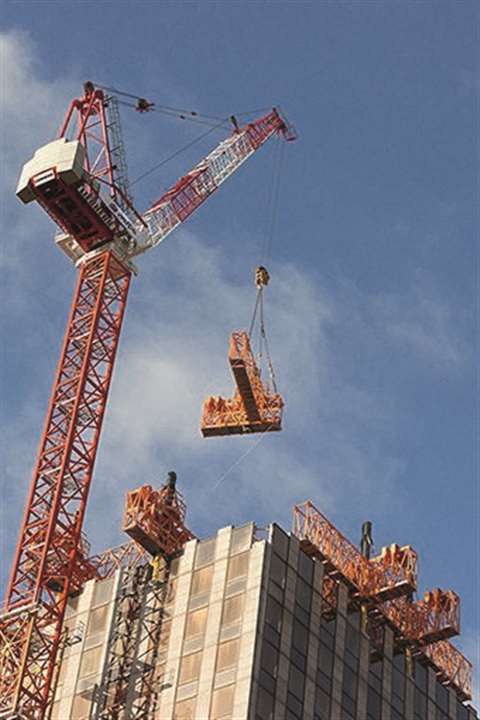 While heavy duty crawler cranes with a wrecking ball are traditional for demolition, it is getting less common to see them in this application. Bucking the trend, however, is Ferraro Group which has taken delivery of a new 300 tonne capacity duty cycle crane from Sennebogen.

The Bavarian manufacturer says its 6300 E is the world’s largest duty cycle crane. With a working height of 118 metres, it is one-of-a-kind in demolition worldwide and the only one capable of working at this height with a wrecking ball, the company says.

“And the best thing is the duty cycle crane has a crane function that can lift weights of up to 300 tonnes. A 15 tonne concrete wrecking ball and a steel cutter that can cut 20 tonnes in use are already part of the overall package. Thanks to a winch, a special 60 square metre work platform can also be installed at any time and operated up to a height of 118 metres.

“As the Ferrraro Group, we deal with the topics of demolition, industrial dismantling and project development, and with the 300 tonner, there are practically no limits,” states Nicolas Riqué, Ferraro Group marketing. 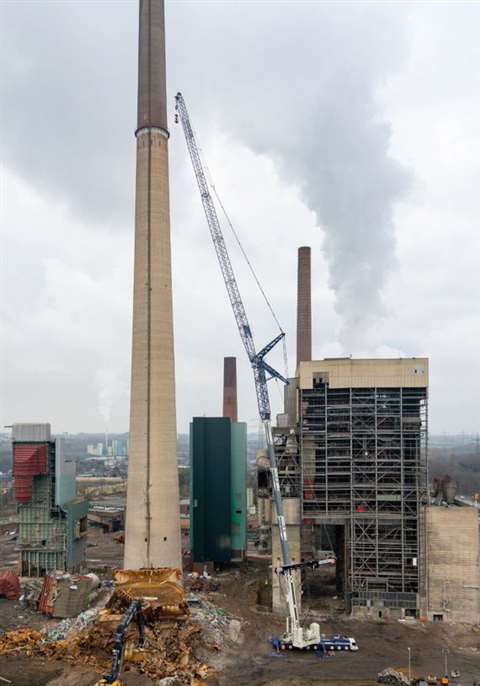 Using all of the 91 metre luffing jib on Wasel’s new Liebherr LTM 1650-8.1 to place a team of explosives experts 140 metres up an old chimney

Other types of lifting equipment used in demolition further demonstrate the increasing level of sophistication in the industry. A few years ago ICST covered the massive ALE ALSK crane used in an urban setting for the dismantling the old Earl’s Court exhibition centre in the UK. A more low key but also very impressive part of that project was the removal of a large access bridge and the main roof of the exhibition centre.

The bridge spanning a railway line was cut into full length pieces, lifted and then slid out using lifting and transport equipment from ALE. The roof, weighing 1,300 tonnes, was lowered 28 metres to the ground in one piece. Challenges included site conditions, lack of space, logistical constraints, environmental factors and more.

Keltrbay’s Earls Court demolition
UK specialist Keltbray was principal contractor on the £51 million (US$75 million) project to demolish both Earls Court 1 and 2 exhibition centres. Design for temporary works was valued around £1 million and included propping below the main deck to allow access for a 500 tonne mobile crane. There were more than 150 designs and documents just for the temporary works.

The roof of the main exhibition hall was a 76 metre clear span by 126 metres long. It comprised seven steel girder trusses at 15 metre centres. First thoughts about how to remove it included controlled demolition at height or a birdcage scaffold to the underside of the roof trusses.

Five potential methods were considered, including using large mobile cranes lifting together. Risks included the need for extensive back-propping to support the mobile cranes, lifting operations above London Underground tunnels and logistical issues just to get cranes into the site.

It was decided to lower the roof first because that way there would be little work at height, limited risk of dropping material, other activities could continue while the roof was being prepared and the roof would be dismantled inside the building.

Specialist strand jacking knowledge was needed and the roof had to be kept stable, horizontally and vertically, throughout the process. Fagioli from Italy supplied the strand jacks for this project. The ends of the trusses had to be re-framed so the strand jacks carried the weight but put the load back into the support columns and the roof. Bracing and preloaded ties were connected to the structure to control horizontal movement in the roof.

The strand jacks were installed above the supports at both ends of the main trusses. Cantilevered frames were designed and built on the existing columns. With the strand jack on one side, it was balanced on the other by a vertical down tie to the existing concrete structure below.

Removing the cladding prior to lowering reduced the weight of the roof from 1,700 to 1,300 tonnes. The lowering process, completed in conjunction with Fagioli and its computerised control of the jacks, was a single-shift, 11-hour operation.

With the roof lowered to ground level it was then cut up using conventional demolition methods. 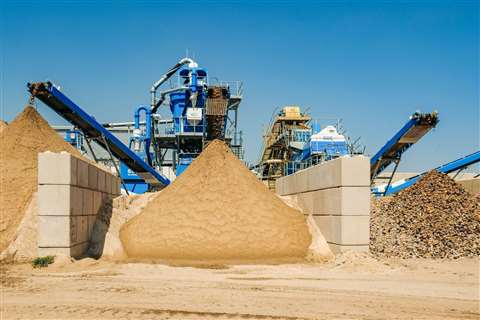 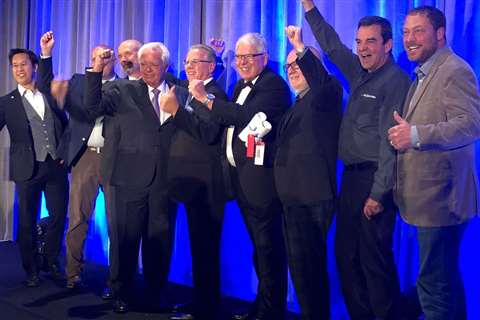 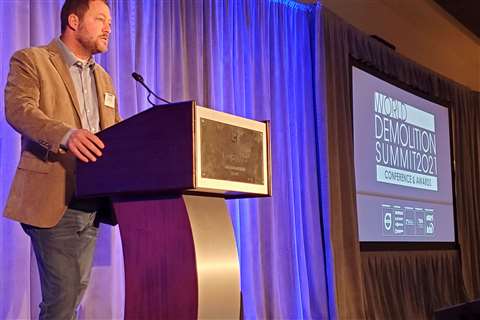