Who are the top 50 tower crane companies in North America? 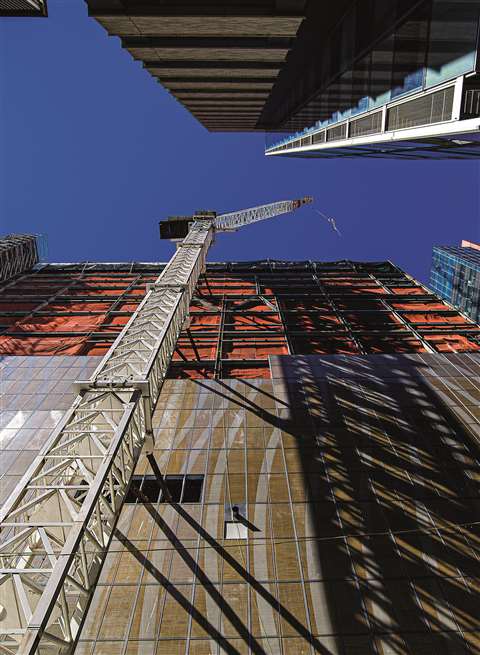 The market for tower cranes in North America is stable and poised for growth. While there may have been a hiccup in demand over the past couple of years, tower cranes are still the crane of choice for urban high-rise projects.

And the good news is that tower crane usage as picked up considerably on infrastructure projects, industrial jobs and large-scale mixed-use projects and campuses where multiple tower cranes often operate in tandem.

Top 50 tower crane fleets in 2022
The ACT Tower Crane 50 reflects an evolving sector that is in a state of flux. Mergers and acquisitions (M&A) have significantly changed our 2022 tower crane toplist, which is slightly down in terms of overall fleet size from 2021. In 2021, the fleet size of the list was 2,260 units, while this year it is 2,221, a loss of 39 units.

This year, the ACT team cast a wide net to try to grow the ACT Tower Crane 50 list. As ever, compiling this list can be a frustrating endeavor as M&A activity greatly impacted the list. Even though five new companies were added, our 2022 list has 36 companies, as compared to 34 last year.

Leading North American tower crane company Morrow Equipment remains at Number 1, a place the company has held since the inception of the ACT Tower Crane 50. Morrow reported an impressive 563-unit fleet. In May, Morrow placed an order for 27 new Liebherr tower cranes, so the company’s fleet appears to be growing. (See our News article about this order on page 6.)

Maxim Crane Works held onto the Number 2 spot with 334 units.

Uperio, fueled by the acquisitions of P&J Arcomet and Compass Equipment, debuts on our list at Number 3 with a fleet of 140 tower cranes. The addition of Uperio North America bumped Bigge Crane & Rigging to Number 4. Bigge reported a fleet of 99 tower cranes.

ML Crane Group, with its subsidiary United Crane Group, secured a spot at 21, posting a fleet of 29 cranes. Last year the company was ranked Number 26.

Wagstaff Crane acquired Bronson Crane, which continues to operate as Bronson. Bronson is based at Wagstaff’s headquarters in Murray, UT. Bronson is ranked number 18, up from Number 20 last year.

In 2022, there are five newcomers on the ACT Tower Crane 50. In addition to Uperio at Number 3, Fuse Equipment made its debut at Number 20. Established in 2007, Fuse is a growing company with headquarters in Boston, MA, and offices in New York, the Southeast, Texas and on the West Coast. 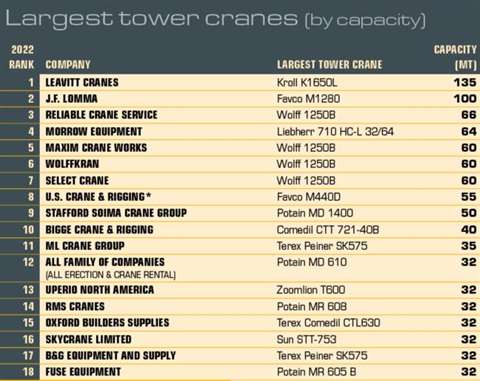 JCrane has been on the list before and returns with a rank of Number 33.

The final newcomer is Number 34, Arrow Crane. With a fleet of eight tower cranes, the company is based in Ontario, Canada. The company is led by Daniel Wright, president, and his grandfather, Ricky Redigonda.

The biggest jumper is Rocky Mountain Crane, which jumped from 32 to 22.

With all the M&A activity over the last couple of years, it’s easy to understand why this list looks different this year. The ACT Tower Crane 50 is open to any tower crane company that operates in the United States, Canada and Mexico.

ACT’s editorial team sent out more than 300 survey forms. We rely on the integrity of the information submitted, and we are not responsible for inaccurate or incomplete information.