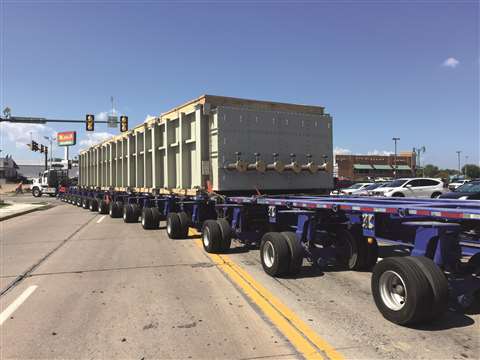 Bigge Crane and Rigging recently transported two large convection modules in a move that qualified as the largest dual-lane transport the company has ever performed on a single trailer without the use of bolsters. The 500,000-pound modules were in route to Europe, where they will be used as heat exchangers for a power block.

The 73-mile trek from Locust Grove, OK to the Port of Catoosa, OK was no small feat and involved a show-stopping Bigge convoy of the heavy haul transport configuration, four state police, two civilian escorts and two mechanic trucks.

Bigge was contracted by a freight forwarder to transport both modules that measured 14 feet tall, 90 feet long and 16 feet wide. Over a period of one weeks’ time, Bigge safely and successfully transported both superloads to the Port of Catoosa for a barge load out. This made for a rather challenging schedule due to tight barge departure deadlines.

“One of the largest challenges for this is Oklahoma has strict loading requirements for these kind of transports,” said Marc Manfredda, projects branch manager for Bigge’s Houston division. “For a dual-lane transport, we had to stay under 40,000 pounds per line, which in turn made our configuration one of the largest transport trailer configurations that we’ve done in recent years. So when you’re dealing with something that large everything comes into effect.”Finding a routeWhile the possible routes using a dual-lane trailer were difficult to survey, the project team found a route that was preferred by the state DOT and one that also minimized public impact. With the assistance of state and local police, Bigge’s team was able to move the massive modules efficiently and safely.

“We had four state police and three to four city police when entering the city limits of each town,” said Manfredda.

With most of the roadways being county and state, in addition to the transport being 20 feet wide tire-to-tire, it was also essential to assure adequate road surface.Smooth sailingBigge loaded out the modules with a 500-ton gantry system, which took six hours from set up to load-out. To expedite the barge loading, Bigge offloaded the modules with a crane in less than three hours. A 550-ton capacity Demag CC 2600 crawler lifted the modules from the dual-lane transporters to the barge deck. The use of the crane in lieu of a roll-on operation decreased the time it took for the transloads and ensured an on-time barge departure.

“We actually had the luxury of a large, super lift crane in that location,” said Manfredda. “Convenience and versatility were the factors in providing the crane into the on-load of the barge.”

Although there were a few issues, Bigge used a transport configuration and route that minimized the effect on utilities and the public, Manfredda said.