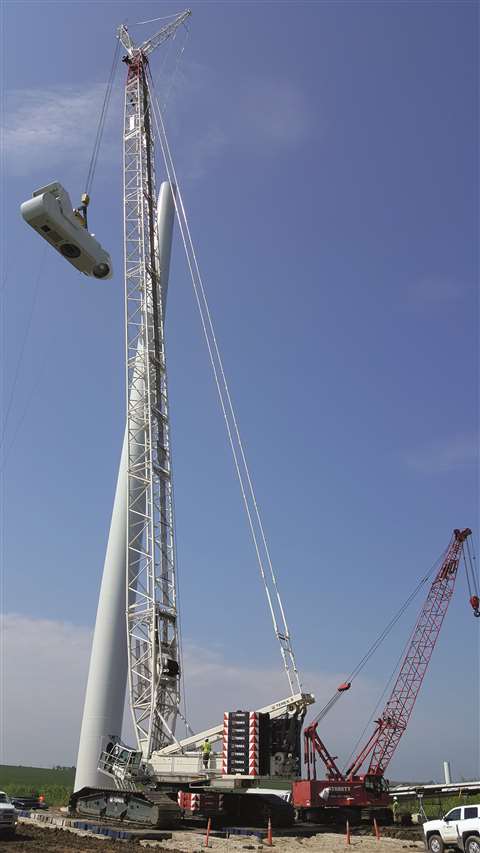 As the U.S. wind market picks back up, Sterett Crane & Rigging is standing by with a crane fleet that is geared up and ready for wind farm erection and maintenance. Sterett recently dispatched a crane package that erected 60 turbines at the Kelly Creek Wind Farm in Hersher, IL, according to Matt Crisp, crawler crane fleet manager for Sterett.

“This was a very healthy job for us,” Crisp said. “It was a bare rental project for White Construction, a regular client of ours.”

“The Manitowoc crawler worked in conjunction with the CC 2400 to tail the base and mid section erection of the towers,” said Crisp. The smaller crawler also off loaded parts and performed other lifting duties at the wind farm.

“These larger crawler cranes are made for performing wind work and they do a great job at it,” said Crisp. “We own all the parts and pieces for the wind kit for all three machines, which makes them ready for this application.”

He anticipates wind work will be steady in 2017, and he said that Sterett will continue to pursue new construction and maintenance work in the wind segment.

“It’s a healthy business segment and we have the big cranes that are needed,” he said. “We are definitely getting more of this work.”

Erection work at the Kelly Creek Wind Farm started in late August 2016 and finished in early November 2016. During the “good” weeks, the cranes could erect five turbines a day with the CC 2800s able to walk between pads.

“We only had one complete teardown to disassemble and reassemble the CC 2800 to cross a road,” Crisp said. The only big challenges was weather, mainly rain and wind.

“There was rain and a lot of wind that delayed the contractor’s schedule to some extent,” said Crisp. “They had like 10 times the normal amount of rainfall for that time period and that region of the country.”Smooth projectDespite the weather challenges Crisp said the job went off without a hitch.

“It was a fairly smooth project for the most part,” he said. “The job was completed on time. They had anticipated four months and were done in three months.”

Ground conditions were good. The engineered base for the crane included rock and timber matting. The blades were lifted and placed one at a time, Crisp said.

“They used a blade gripper that saddles the blade inside, and it is hoisted from there,” he said. “The gripper actually weighs more than the blade itself. We’ve used that method on two previous jobs with White Construction.”

Sterett Crane and Rigging is based in Owensboro, KY and has six branches, providing lifting, rigging and heavy hauling.