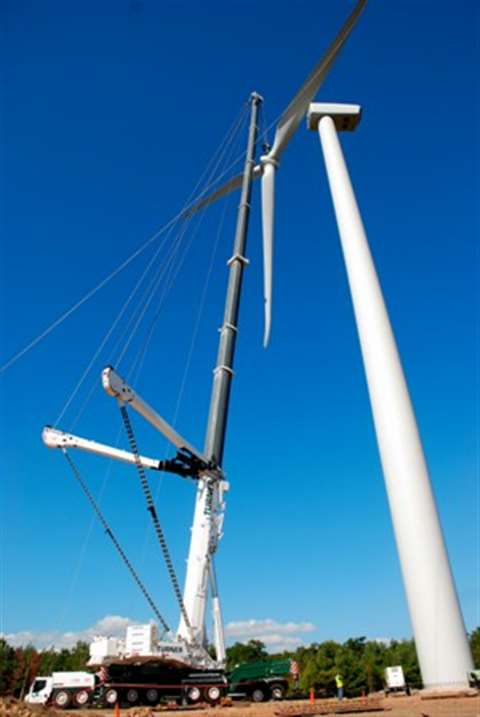 US wind power projects in 2010 are off to a slow start but major players in the market forecast that business should pick up later in the year, writes Jeff Hampton.

There's no questioning that the winds of change are blowing through the US energy sector but, like the wind itself, the change is neither steady nor always coming from the same direction.

While the American Wind Energy Association reports that the US wind industry broke all previous records by installing nearly 10,000 megawatts of new generating capacity in 2009 - enough to serve more than 2.4 million homes - the companies that transport and erect wind turbine components report the year was lackluster, and the future is less than clear.

Turner Brothers, one of the largest crane operators in the South, reports that business was down in 2009 compared to 2006 through 2008, and 2010 is off to a slow start.

"We do have some projects lined up, especially for the third and fourth quarters, but the year has started slower than anticipated." says David Cowley, executive vice president, cranes and rigging.

Most of those projects will be in the Midwest and West, and some in Texas too. But even in Texas, which leads the nation in wind energy capacity, development has slowed down while the state upgrades its grid, he says.

The company has approximately 22 cranes working in the wind industry, including hydraulic and crawler cranes ranging from 40 to 1,330 tons.

Much of the equipment is deployed in the Gulf Coast states, but Turner has them working from New York to Washington and will be moving into Canada this year.

Turner Brothers' newest acquisition is a Liebherr LTM11200 - a hydraulic crane with the longest telescopic boom in the world. "We're focusing it primarily on wind installations," says Cowley.

It can also move quickly and safely from location to location with a 400-foot boom. "We feel like it's a better tool to use in these locations," says Cowley.

Illinois-based Essex Crane Rental Corp. reports that 2009 was not as strong as 2008. "The first half of the year was good because there was a lot of run-over of projects from 2008, but as the year went on, new projects were getting more scarce," says Jason Walton, marketing manager.

Essex is one of the world's largest providers of lattice-boom crawler cranes with major service centers in Alabama, Texas, Colorado, California and Florida, and remote yards nationwide. The company specializes in bare rentals.

Walton says a lot of wind projects in the last six to eight months have been for wind farm maintenance, which is not their preferred business because maintenance rentals are short duration - just two to four weeks - while wind farm construction rentals can last four to six months or longer.

Walton says the first two quarters of 2010 are looking weak in terms of wind work, but he says they are hearing that there will be more activity toward the second half of the year. "Wind projects are out there, but not anywhere near the previous levels."

With new projects slow in coming, a lot of cranes are sitting idle, and that's putting downward pressure on rental rates.

"Construction costs across the board have been impacted by this economic downturn," says Walton. "Hopefully we'll get going here again."

Ben Graham, vice president of cranes for Kirby-Smith Machinery, says his company is also seeing depressed rental rates due to the over-availability of equipment.

"We're definitely seeing an up-tick in requests for quotations, but that hasn't translated to orders yet," he says.

Based in Oklahoma City, Kirby-Smith has operations spanning from St. Louis down into Texas. In the past, the wind business has been as much as 30 percent of their rental business, but it's currently less than 10 percent. Graham says rentals are going primarily to wind projects in Oklahoma and Kansas.

Among crane manufacturers, Kobelco reports that their wind-related business in 2009 was about 15 percent off of 2008, and they expect 2010 to be down from 2009 by approximately 20 percent.

Just as wind farm contractors are waiting to see what kind of business 2010 will bring, they're also waiting to see if taller towers and heavier nacelles will materialize as the new norm in the United States.

"The wind industry is constantly changing - much like the wind itself," says Jack Fendrick, vice president of Kobelco. "There are many discussions about towers growing in height and nacelles growing in size."

Fendrick says Kobelco's SL 6000 with the turbine tip can work on 100 meter towers, but larger equipment raises questions about transportation.

"The larger the crane, the logistics of transport, erection, travel, etc. become more difficult and more expensive," he says. "We are constantly communicating with tower and nacelle manufacturers to exchange information to assist their planning as well as our own."

Turner Brother's Cowley says that while they haven't seen the larger nacelles and towers yet, their new LTM11200 can handle those heights and weights. "That was our primary reason for purchasing it," he says.

Ray Mullen, owner of Mullen Crane and Transport, Soda Springs, Idaho, says he has heard that towers will get as tall as 105 meters where the wind is said to be more consistent.

"We bought into the Manitowoc 18000 because it is capable of handling the next generation of wind machines," he says. His company also has a Liebherr LTM11200. "There's only two on the continent, and we own one of them."

"Before we make an investment in new equipment, we want to make sure we can place it within the wind energy sector as well as other industries," he says. "We're not just a wind player, so we want to be able to utilize it in different sectors."

Mike Wood, global product director for Manitowoc, says the transition to taller towers and larger nacelles has been happening for a while, similar to the increase from 50 meter towers to 80 meters beginning in 2005.

"Development has been sporadic to date, and it's difficult to gauge when it will become a real trend," he says. "If the industry in general grows in that direction, we have product in our 18000 to meet that need."

Still, if the trend is real then Manitowoc would develop a product to better handle other issues such as transportation and movement at the site. "Our customers would demand that they get more efficient equipment," Wood says.

"We watch the trends on a daily basis because we have to be able to justify our development expenses. We're always in the process of that - watching the trends and looking at development," he says.

Looking at the wind business in general, "we're seeing an up-tick in project levels based on the number of calls we're seeing from the end users," Wood says.

"We believe very earnestly that the wind industry can continue to pay dividends for us. They've been using our products extensively over the past few years."