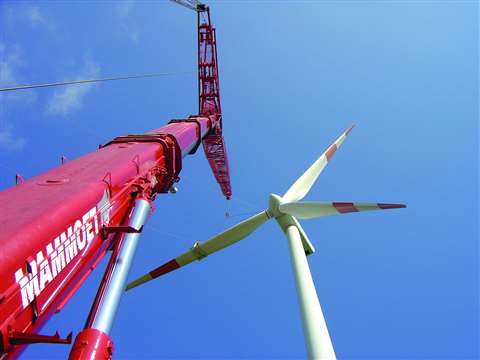 Americans have relied on wind energy since the mid-1850s when the first windmills were built for pumping water and later supplying electricity. By the early 1900s, more than 6 million steel blade windmills dotted the U.S. countryside.

In 1941 the largest wind turbine of that era was installed on Grandpa’s Knob Hill in Vermont, where it fed electricity to a utility network during World War II, according to the website Energy.gov. By the late 1940s, windmills were supplying electricity for irrigating farms.

It wasn’t until high oil prices in the late 1970s that the U.S. started looking at wind power as a viable source of energy. President Jimmy Carter signed the Public Utility Regulatory Policies Act of 1978 that required businesses to buy a certain amount of electricity from renewable energy sources, including wind. The state of California took the lead and constructed the first utility grade wind farms in the early 1980s. In 1992, President George Bush signed the Energy Policy Act that authorized a production tax credit of 1.5 cents per kilowatt hour of wind-power-generated electricity.

Fast forward to 2016, when the wind power sector added jobs more than nine times faster than the overall economy, according to the 2016 U.S. Wind Industry Annual Market Report released by the American Wind Energy Association (AWEA) in April 2017. More than 8,000 megawatts of new wind power was installed in 2016 and 2015. Some $14 billion dollars was invested in new wind farms in 2016, and the sector supports a record-high 102,500 jobs.

This is all excellent news for the crane and specialized transportation sectors that haul and erect these huge components.

Buckner Companies, based in Graham, NC, supplied its first crane to erect wind turbines in 2003 at the Colorado Green Project in Lamar, CO. Depending on the type and height of the towers and nacelles, Buckner has 60 cranes capable of erecting windmills. Buckner’s deep investment in cranes that can service the wind industry is ongoing. The company recently took delivery of two Liebherr LR 1500 crawlers. A third unit is expected “any day now,” said Doug Williams, CEO.

Buckner Companies recently dispatched its two newest models as a part of an eight-crane package working in Texas.

“The wind market is as strong, or maybe even stronger, than it’s ever been,” said Williams. “I think that’s because in addition to installation, there’s also a good amount of maintenance work going on, and then there’s a new area that is referred to as ‘repowering.’”

He explained that the windmills erected eight to 10 years ago now need replacement components to produce wind more efficiently.

“They are now going back to those turbines and changing out the rotor and adding larger blades and new gear boxes,” Williams said. “It allows the existing tower and turbine to be more efficient to be able to generate more power, and it also allows the owners to start a whole new cycle of tax credits. The repowering work could become almost as significant as the new installation work.”

The three areas that require cranes and transport services – new installations, repowering and maintenance – are all converging at once, Williams explained.

“This means 2017 is going to be stronger than 2016 was, and everyone tells us that 2018, 2019 and 2020 will be unprecedented,” he said. “I’m not sure how to put parameters on it, but it’s going to be a significant jump. Of course we have already seen an increase in the crane sizes needed but I believe we will see the required sizes and capacities jump into the 800 to 1,000-ton capacity range.”

There’s also the advent of offshore wind farms that will be coming to U.S. coastal areas soon. The first offshore wind farm in the U.S. is Block Island Wind Farm, developed by DeepWater Wind, off the coast of Rhode Island. Block Island became operational in December 2016, delivering electricity into the New England region’s grid.

“Sometime in 2019 and 2020 and going forward, we will start seeing an increase in the offshore wind market,” Williams said. “This will become another big part of the wind industry in the U.S.”

Mammoet installs wind turbines around the world, and Mammoet USA South, based in Houston, is a big player in the wind market.

“Since the inflection point in 2017, U.S.-installed wind capacity has been on the upswing,” said Shawn Lifrage, wind account manager for Mammoet USA South. “The new wind farm market is strong and getting stronger through at least 2020 as a result of two main factors: the decreasing cost of equipment and installations and the U.S. government’s performance-based incentive program for supporting clean energy, the Renewable Electricity Production Tax Credit (PTC) and Investment Tax Credit.”

Lifrage said that more new wind farm installations are expected over the next three years, and agreed that service on existing wind farms and repowering projects are picking up as well.

“Due to the increasing demand for wind energy over the past 10 years, many companies have entered the market to supply cranes and installation services,” said Lifrage. “Activity has increased since the PTC extension and will continue at a strong pace for at least the next few years for new builds.  Repowering projects will certainly be part of the mix and are coming on strong for units that have been in operation.”

Mammoet supports new wind farm building, repowering and service projects from the transportation of wind turbine blades, nacelles and tower components from the factories to the site by ship, rail and truck to the wind turbine generator mechanical and electrical installation. Lifrage pointed out that wind farms are being constructed more quickly today than in the past due to more efficient cranes and well-organized construction planning.

“As the industry has matured, installation efficiencies have certainly been achieved,” he said. “Another point is that the entire wind farm supply chain – engineering consultants, the wind turbine and tower manufacturers, construction companies, the foundation suppliers and the like, have has worked to drive out costs to make wind energy competitive to other forms of conventional power generated from fossil fuels such as coal and natural gas.”

Henrik Poulsen, wind director for Mammoet USA South, said that with the focus on safety, quality and cost, there have been many improvements made by the turbine manufacturers that have also improved productivity.

“The development of special lifting devices for the main components has shown to cut down the installation time significantly, combined with cranes developed with focus on the wind market, such as cranes with wide track and narrow track functionalities,” said Poulsen. “Wind projects have become more of a production line, and optimization of all aspects of it, is constantly a focus area.”

Still, crane companies do face challenges performing wind work. The cranes required are expensive and often they have to be assembled and reassembled several times during the construction of a wind farm. Williams said that properly prepared grounds and roadways are also an issue.

“It seems that as the wind market has become more competitive that in some cases there may not be enough attention being paid in the bidding of implementation process, specifically roads that accommodate big cranes,” he said. “By far the most challenging issue is being able to quantify the soil conditions for crawling and moving the crane from one windmill to the other.”

While ground conditions and roadway development is the responsibility of the installation contractor, it can be an unquantified factor.

“If you identify a problem with ground conditions, it stops everything,” said Williams. “OSHA puts the final responsibility on the crane operator so that he or she has the final word. There have been times that the operator has to say no.”

And then there are times when the operator doesn’t have enough information to know if the ground conditions are adequate for operating the crane.

“You don’t know what’s under the soil,” said Williams. “There are times we would like to see more crawl road preparation and more crawl road soil analysis and inspection prior to the cranes making
the move.”

As the wind market ramps up, finding qualified operators, technicians, mechanics and truck drivers will be an issue. Already the wind contractors are realizing they need to book cranes far into the future.

“We are well beyond the point of being able to book cranes on short notice,” Williams said. “When I say short notice, I mean three to four months. We are seeing the smarter customers and contractors booking cranes a year in advance and booking them for a very long duration because if they wait until the time they need them, the cranes are already booked and not available.”