2020 was projected to be a banner year for the wind power industry. But with the COVID-19 coronavirus crises, it’s hard to say if the upbeat outlook for the wind energy market will continue. Assuming work is not shutdown, chances are high the wind market will be a bright spot for the crane, rigging and transport sector. 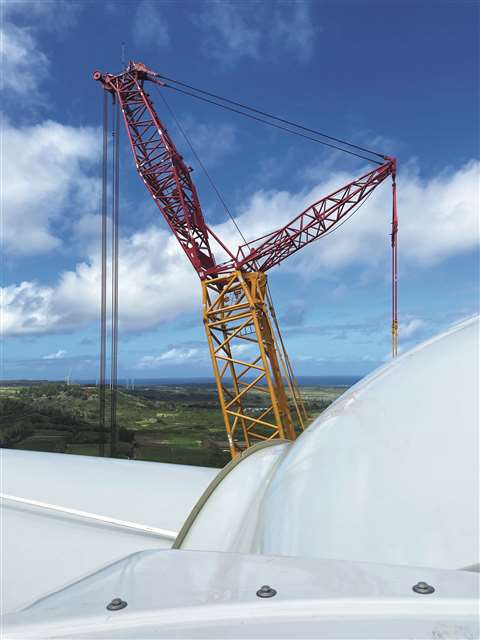 Wind tower maintenance requiring cranes could be impacted this year due to limited availability, especially if the lift requires a 500-ton capacity crane or larger.

The U.S. Energy Information Administration (EIA) is forecasting the United States to add near record level gigawatts of new wind energy capacity to be added to the grid in 2020. A lofty prediction, the EIA predicts that U.S. wind capacity additions in both 2019 and in 2020 will be near the annual record level of additions set in 2012.

Wind capacity additions through June 2019 totaled 3.7 gigawatts (GW). According to projects reported to EIA through surveys and on EIA’s Preliminary Monthly Electric Generator Inventory, operators expected another 8.5 GW to come online by the end of 2019, with an additional 14.3 GW by the end of the year 2020.

Changes in annual wind capacity additions in the United States are often related to changes in tax incentives, according to the EIA. The U.S. production tax credit (PTC) provides operators with a tax credit per kilowatt hour of renewable electricity generated for the first 10 years a facility is in operation. The PTC originally expired at the end of 2012 but was later retroactively renewed by the U.S. Congress.

Wind energy is also on the radar of investment companies and finance media.

“Renewable energy is poised for a decade of epic growth,” claims a February 5, 2020 article by Maxx Chatsko of The Motley Fool. “Utility-scale solar and onshore wind continue to smash through most forecasts from previous years. If favorable economics continue to drive investment in the renewable duo, then utility-scale solar and onshore wind could generate 30 percent of America’s total electricity in 2030, with all zero-carbon energy sources providing as much as 60 percent.”

The Motley Fool article went on to say that while many projections expect solar power to eventually become the world’s top source of electricity, for now, wind power will continue to be the most favored renewable energy source. Chatsko suggested that the “wind drought” is probably over, meaning that improved technology with newer turbines should allow investors to reap the rewards of recent wind farm expansions. A near record amount of wind came online in 2019, and a record amount should come online in 2020, Chatsko wrote.

According to the EIA, U.S. wind projects must come online by December 2020 to receive the full 2016 PTC value.

“Based on our current orders, Buckner is currently projecting to supply main erection cranes for wind projects totaling 9.8 GW,” said Dan Ives, P.E., engineering product support and analyst, Buckner HeavyLift Cranes. “Therefore, 69 percent of the forecasted new wind turbine capacity for 2020 will be installed by a Buckner crane,” he said 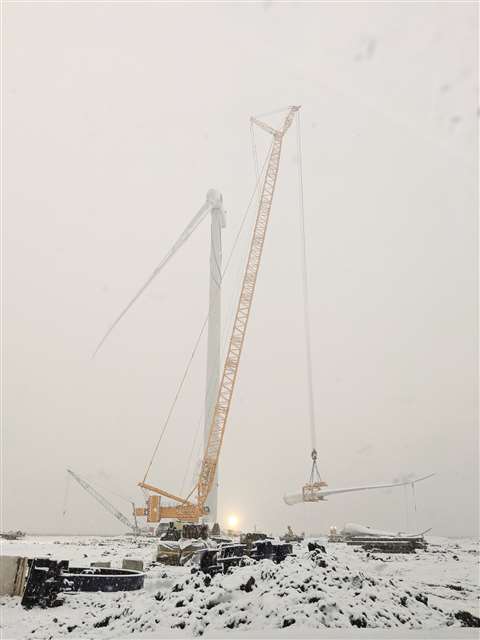 Northern Construction is installing turbines on a project in eastern Kansas. Weather has been a huge challenge requiring work at night and in snow.

This total is split roughly evenly between its fleet of Liebherr LR 11000s and LR 1600s crawlers, Ives said.

“By early spring, Buckner will have 17 LR 11000s operating in the U.S., substantially more than any of our competitors combined,” he said. “This is likely the largest concentration of 1,000-ton capacity cranes that has ever occurred in any single market.”

The Buckner team recently finished a project in Hawaii using a LR 11000 as the main crane. The crane placed new Vestas V-136 wind turbines to a hub height of 105 meters. Eight new turbines were installed on the island’s north shore. These turbines form part of the Hawaiian energy supplier’s plan to expand the proportion of renewable energies from 18 percent to over 65 percent by 2030.

For this deployment, the LR 11000 was set up in the SL3F configuration with a main boom of 108 meters and a fixed jib of 12 meters. In this configuration, the crane has a maximum load capacity of 179 metric tons. When erecting the new wind turbines, the heaviest parts – the nacelle with drivetrain and hub – weigh about 158 metric tons; the crawler crane had to lift this weight to the hub height of 105 meters.

The Liebherr was equipped with 130 metric tons of central ballast and a slewing platform ballast of 250 metric tons. The crane can be used without a derrick.

Palmer, MA-based Northern Construction is working on a wind job in eastern Kansas using its Liebherr LR 11000-SL8F2, according to Alex Rahkonen.

With this configuration, the crane has a capacity of 1,000 metric tons, and with a jib, a capacity of 253 metric tons. There were several reasons this crane was chosen for the project, Rahkonen said.

“The capacity of a larger than 600-ton crane was required due to component weights,” he said. “In addition to that requirement, this particular project requires the crane to be disassembled and moved every few towers.”

He said that the ease at which the LR 11000 can be disassembled and erected has increased efficiency on the jobsite.

“The full capacity of SL8F2 was not required, however the ability to run parallel winches has greatly increased production over SL3F,” Rahkonen explained.

The crane is rigged on engineered soils and hardwood matting. The particular challenge of this job is weather, Rahkonen said.

“Weather is always a problem this time of year,” he said. “A night shift has been added in order to work in favorable wind conditions.” The job is expected to wrap up in the next couple of months.

The next chapter: Wind farm maintenance

Once a wind farm is complete, the work doesn’t stop. Wind tower maintenance has become a large chunk of business for crane and transport companies throughout North America. Dan Ives, P.E., engineering product support and analyst, Buckner HeavyLift, studies every angle of the wind market for his company. He answered these questions regarding the wind tower maintenance arena. 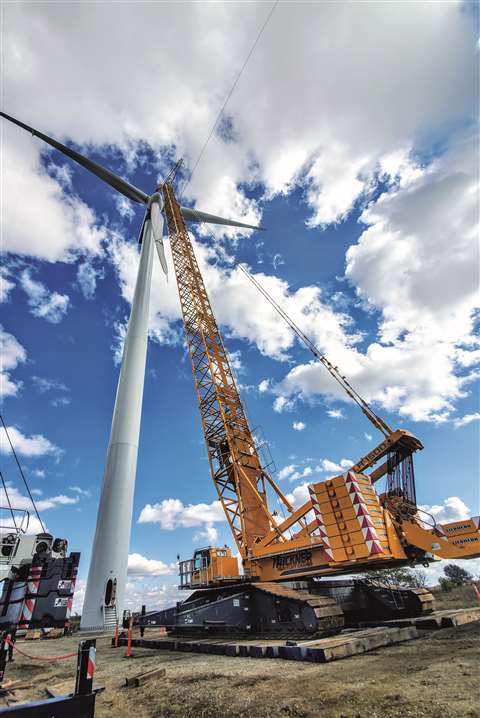 WHAT IS INVOLVED WITH WIND POWER MAINTENANCE IN TERMS OF CRANE WORK?

WHAT TYPES/MODELS OF CRANES ARE GENERALLY INVOLVED WITH TURBINE AND WIND TOWER MAINTENANCE?

Some asset managers will plan major maintenance for several turbines at a time, and in some cases even for all turbines on the site, such as for correcting a serial defect. In these cases, a crawler crane can bring maximum value with its ability to travel between turbines fully rigged and hook-ready.

Our Liebherr LR 1300SX fleet brings a lot of capability for shorter hub heights, while our Liebherr LR 1500 and LR 1600 fleets can raise long booms and bring high capacity to service hub heights well over 100 meters. When topography or other constraints prevent crawling, our fleet of Liebherr LG 1750 cranes can simultaneously deliver high capacity and high hook height.

ABOUT HOW OFTEN DO WIND TURBINES REQUIRE MAINTENANCE?

Wind turbines require regular maintenance, but the routine variety typically does not utilize a crane. They usually operate for several years before requiring a major component exchange. However, due to the nature of the production tax credit, many owners purchased turbines in 2016 that are just now being erected in 2020. Some of these components sat in storage for years, and we are aware of several instances where these conditions have led to premature failure or have required preemptive maintenance to avoid any long-term issues. These atypical conditions that some components have been subjected to have resulted in atypical maintenance intervals, in some cases.

WHAT ARE THE CHALLENGES OF PERFORMING WIND POWER MAINTENANCE WORK?

Naturally wind turbines are sited in windy areas, and this can lead to delays and increased cost if the crane is winded out.

An additional challenge that the wind maintenance market has not had to face before is the unprecedented demand for cranes being felt in 2020 with the surge in new wind turbine installation. Maintenance requiring cranes will likely be impacted this year due to limited availability, especially if the lift requires a 500-ton capacity crane or larger.

WHICH AREAS OF THE COUNTRY DO YOU GENERALLY PERFORM WIND POWER MAINTENANCE WORK?

We have been involved with wind turbine maintenance from the Hawaiian Islands to New England, and everywhere in between. Buckner HeavyLift Cranes is the dominant player in new wind installation, and our goal is to translate our knowledge, experience and relationships from that market into a growing share of the wind maintenance market.