While many sectors were stymied during the global Covid-19 pandemic, the North American wind power segment saw record new installations.

Like many sectors challenged with the Covid-19 global pandemic, the wind power sector experienced a few hiccups in 2020 and into 2021, but for the most part the industry remained healthy.

Some renewable energy products, including both solar and wind, saw delays and stoppage. Some onshore wind installations planned before the pandemic were delayed. In 2021, it is expected that the capacity levels in the wind sector will rebound to reach those of 2019, before the pandemic began. 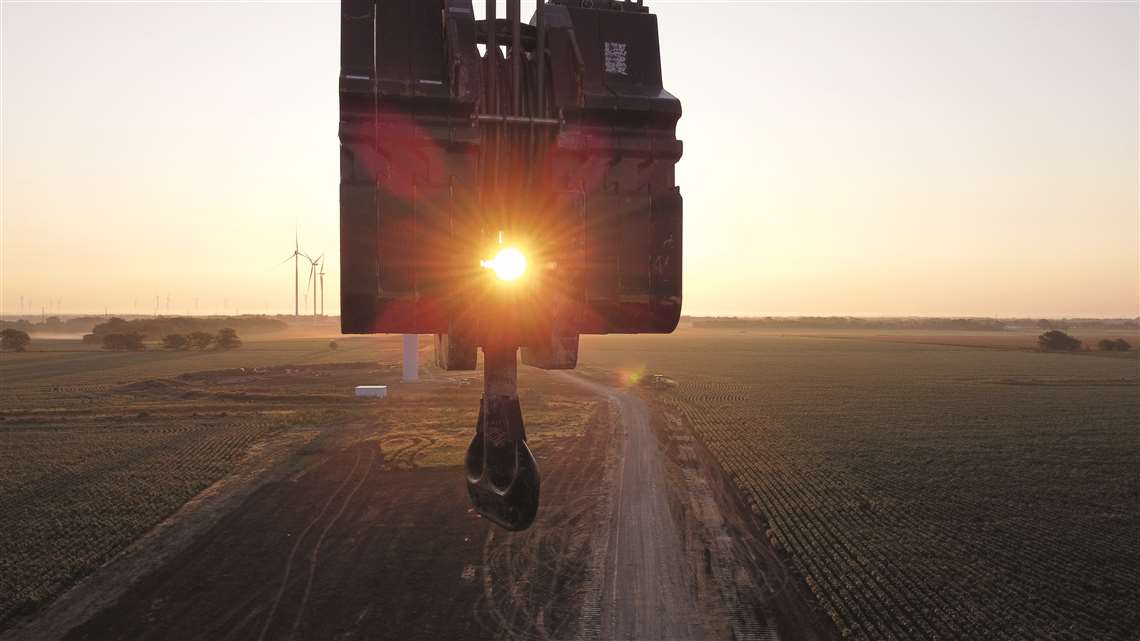 Over the last several years, Buckner cranes have installed the majority of new wind power capacity in the United States, the company said.

Buckner HeavyLift’s Jay Breitbach said that despite the pandemic, 2020 was a record year for new wind power installations.

“Congress passed a one-year extension to the Production Tax Credit deadlines, which allowed projects scheduled to be completed by the end of 2020 to slip into 2021 with no penalty,” he said. “So, we are expecting 2021 to be another blockbuster year for wind power construction.”

Breitbach said the majority of the Buckner fleet of cranes will serve the wind market in 2021, including its entire fleet of Liebherr LR 11000s, which will number at least 20 units this year.

“Of all the main installation cranes supplied in 2020 to the U.S. market, three out of four were supplied by Buckner,” he said. “Our wind projects are concentrated in the Great Plains and Midwest, but our cranes have installed wind turbines from Oahu to upstate New York.”

Over the past few years, the capacity of wind turbines has increased – turbines are heavier and higher.

“In 2020, our cranes installed a lot of turbines in the mid-4-megawatt capacity range, with the largest rotor diameter being 155 meters,” Breitbach said. “This year we have several projects booked that will utilize turbines in the low-to-mid-5-megawatt range, with rotor diameters up to 162 meters. The trend of larger and more powerful wind turbines doesn’t seem to be slowing down.” 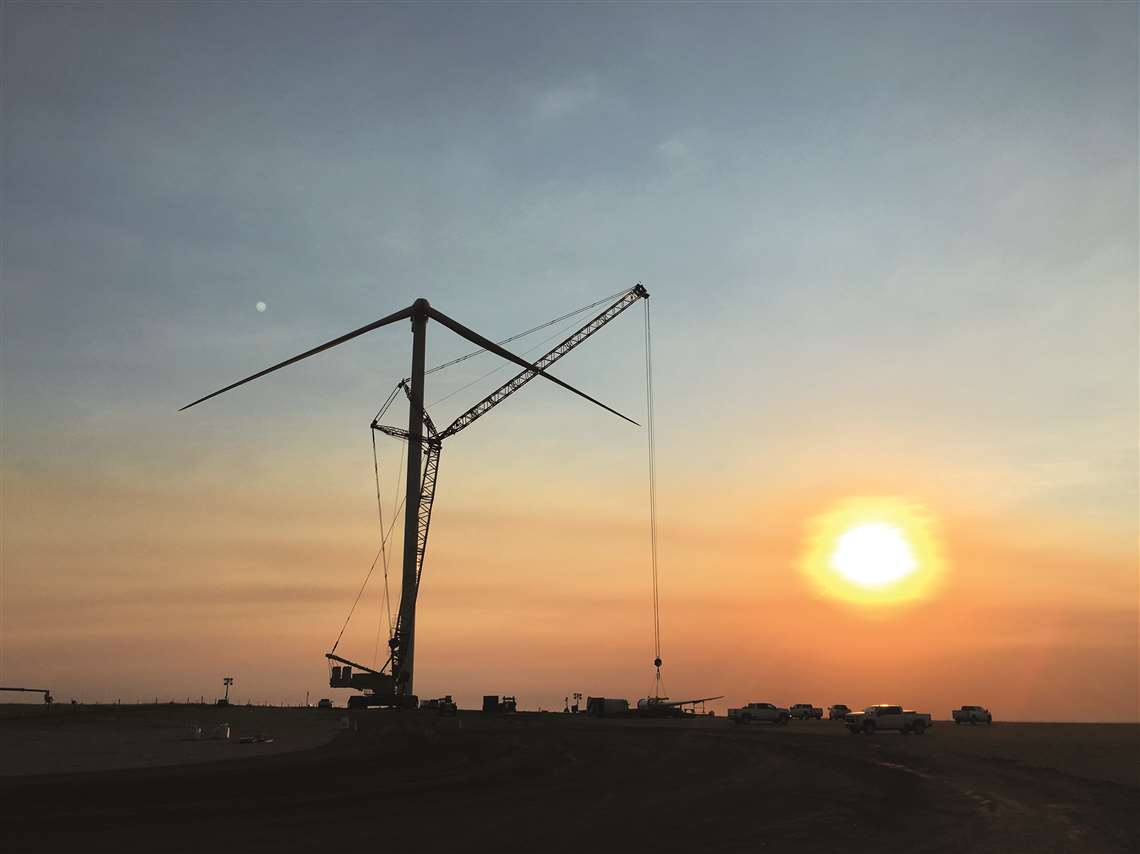 Due to the Covid-19 pandemic, Congress passed a one-year extension to the Production Tax Credit deadlines, which allowed projects scheduled to be completed by the end of 2020 to slip into 2021 with no penalty.

Two years ago, Buckner collaborated with Liebherr to develop a heavy jib for the LR 11000, with a maximum capacity of 235 metric tons, according to Buckner’s Dan Ives.

“Last year we used that jib to lift a wind turbine nacelle with a total gross load of 230 metric tons (about 500,000 pounds), a record-setting lift for an onshore wind turbine,” said Ives. “And we were able to do it without a derrick and ballast tray. Wind turbines are getting higher, larger and heavier, but the LR 11000 is not going to struggle with them anytime soon.”

“But there is still a big role for land-based cranes in offshore wind farms,” said Breitbach. “The turbine components are shipped on separate vessels, so a marshalling yard is used to offload ships, prep and pre-assemble components and then load the installation vessel. This work is well suited to high-capacity crawler cranes, which is Buckner’s specialty.”

Once wind turbines are erected and installed into service, they still need maintenance on a regular basis. It has been estimated that the average turbine needs to be fully replaced after 20 years.

While Buckner’s focus has primarily been on new installations, the company does participate in the maintenance market, Breitbach said.

“Turbine hub heights are getting tall enough such that even large all-terrain cranes will struggle to achieve the capacity and hook height,” he said. “We anticipate a growing need for lattice boom cranes to perform large corrective maintenance.”

There are a handful of cranes that can perform as the “main crane” on a wind farm. The OEM players in this market are Liebherr, Manitowoc and Tadano Demag.

“There are four features that make for an ideal main crane – high capacity, high hook height, a simple configuration such as main boom and fixed jib and low ground-bearing pressure,” said Breitbach. “The two crane models in our fleet that hit all those criteria are the Liebherr LR 1600/2 and Liebherr LR 11000.”

“The LR 1800 is also a good fit for many sites,” Ives said. “For projects where crawling is challenging or impossible, we also have the LG 1750, a truck-mounted lattice boom crane that is fully roadable.”

Buckner goes all in

Buckner HeavyLift has long shown its commitment to the U.S. crane market and especially the wind power sector, according to President and CEO Doug Williams. 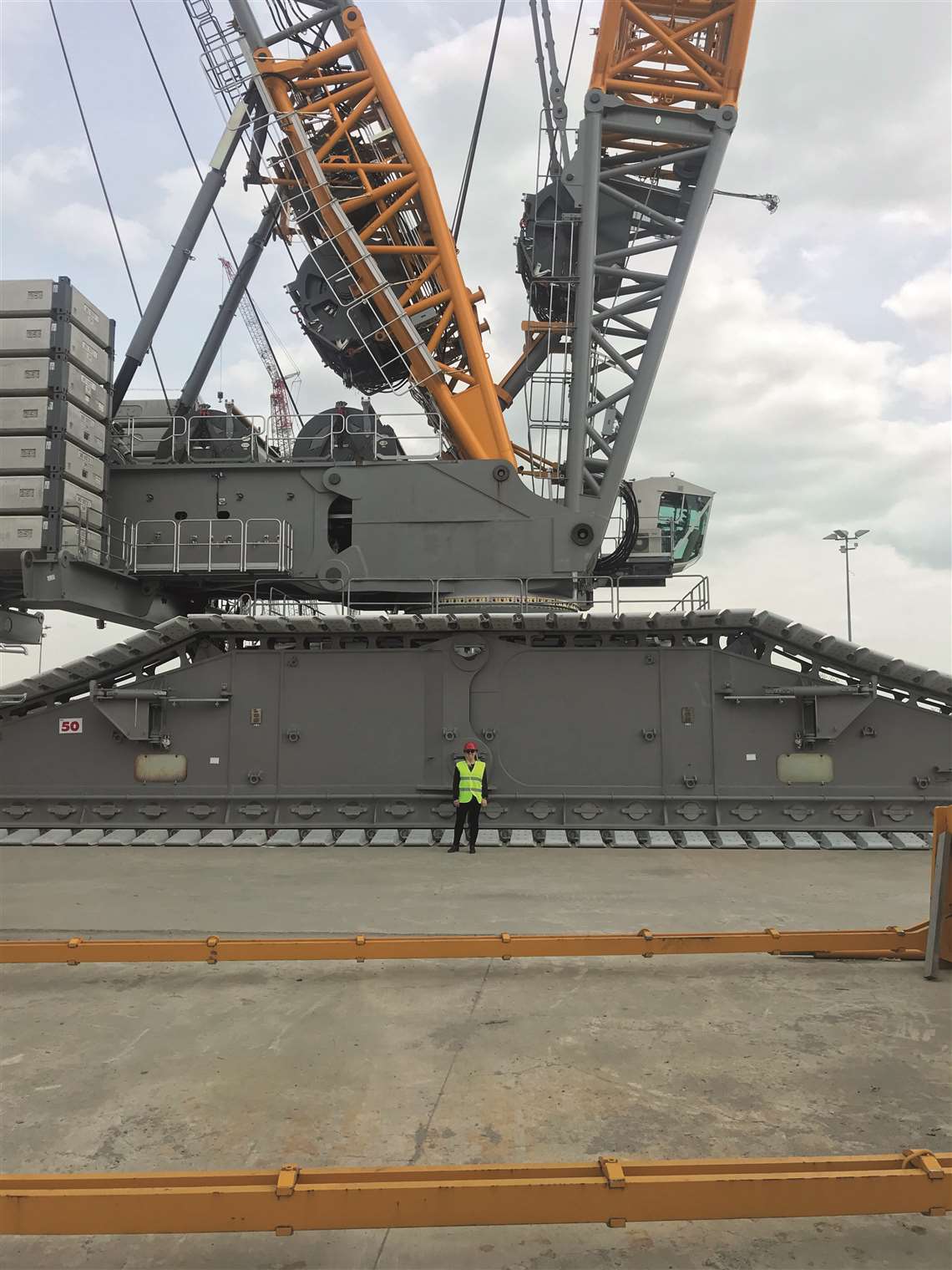 “This fleet will grow to exceed 30 11000s in 2022,” said Williams. “Buckner will add the 1,300-ton LTR 11200 to our fleet during the summer of 2021. The LTR 11200 is the largest telescopic crawler in the world. This crane has a narrow track system that makes it ideal for wind maintenance and wind repowering projects.”

“This is the first permanently U.S.-based LR-13000,” Williams said. “This is the largest factory manufactured crawler crane produced.”

“We are thankful for our end-user customers and our industry peer customers for the continued confidence that allows these opportunities to be a reality,” he said.

Mountain Crane’s Robb Hebble said wind farm development and wind turbine erection is growing. There is an ample base of undeveloped wind farms and a substantial number of feasible locations for new developments.

Mountain Crane has been in the wind industry for more than a decade, performing both new installations and maintenance work. The company works throughout the country, (including the Hawaiian Islands) as well as in Canada and Central and South America. 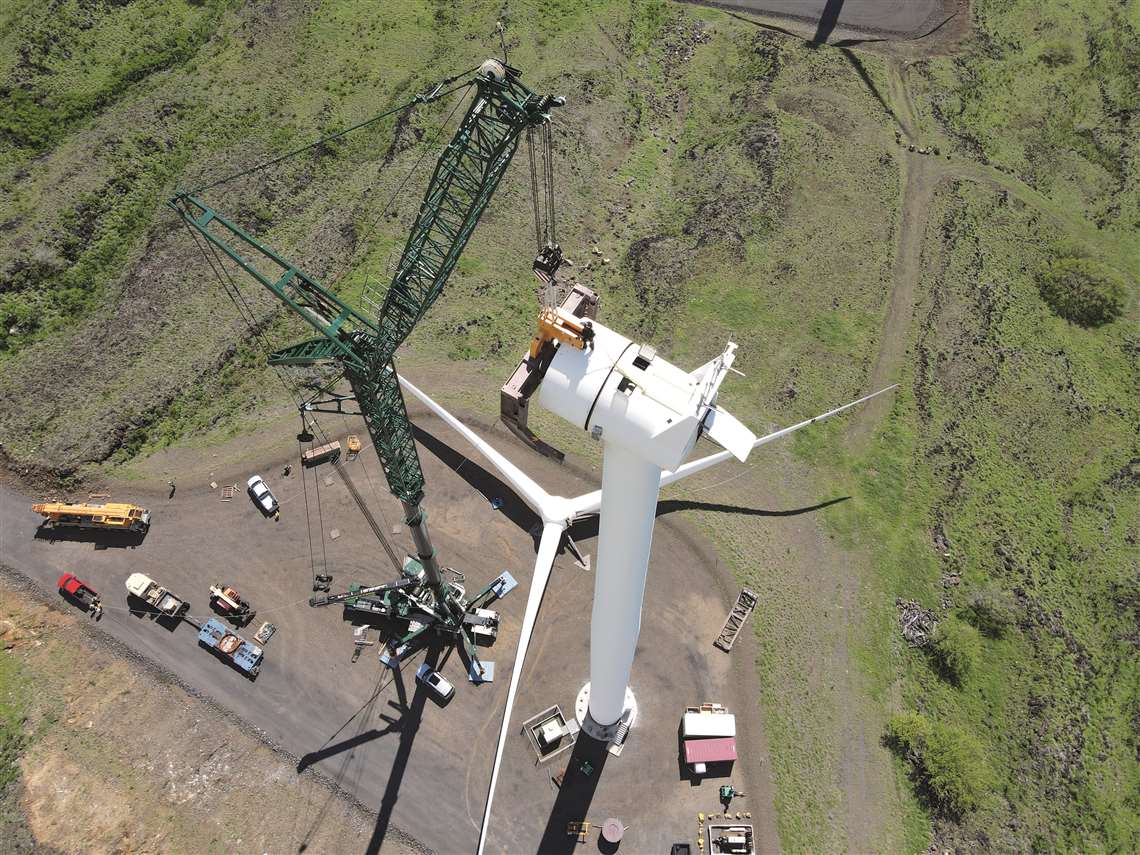 Mountain Crane has been in the wind industry for more than a decade, performing both new installations and maintenance work.

“We have also seen an increase in wind being developed in areas previously thought too difficult to build in,” said Hebble. “This growth is driven by companies like us bringing more specialized equipment to deal with these conditions.”

Some 70 percent of the Mountain Crane fleet is dedicated to the wind market, Hebble said, meaning 220 to 1,200-ton capacity cranes with up to 80 percent of specialized onsite mobilization support of crane and wind components.

“The average hub heights of turbines these days is a minimum of 100 to 105 meters, with expectations of reach hub heights reaching in excess of 130 meters,” Hebble said. “Turbine components have been dramatically increasing since 2018.”

“Not to say it won’t happen, but the ocean jacking vessels erecting offshore farms are configured with specialized lifting capabilities, which may or may not include, say an upper and lower section of a conventional crawler crane like the Liebherr LR 11350, LR 11000 or even an LR 13000,” he said. “Block Island, for example, conventional cranes were used for support at the harbor, loading components to vessels.”

Boss Crane & Rigging concentrates on the wind power maintenance sector. The company said the market is strong but still evolving.

“The advantage is that are we are experts in all aspects of maintenance across the board,” Hebble said. “Decoms, blade replacement, GB exchanges. The only disadvantages are not having a consistent timeline of turbine failures, large open regions of farms throughout the U.S. and mobilization costs.”

Since its inception, Boss Crane & Rigging has been working in the wind power market in Texas, Arkansas, Oklahoma, Kansas and throughout the Midwest. For the most part, the company concentrates on wind farm maintenance. The market is strong, but still evolving, according to David Cowley, president of the company.

About 60 percent of its cranes are allocated to wind farm maintenance and repowering projects, according to Boss’ Clint Dollahite. Performing maintenance work requires a special skill set, especially with increasing turbine heights and weights.

“We have seen turbines increase from 80 meters to 120 meters, with the nacelle and blades getting larger,” said Dollahite. “They are now requiring larger capacity cranes.”

“The only downside is this work is based on being able to work, but with so many windy days stopping work, that’s a challenge.”

While Cowley doesn’t envision Boss getting involved in offshore wind work, he said “you never know with these changing times.” 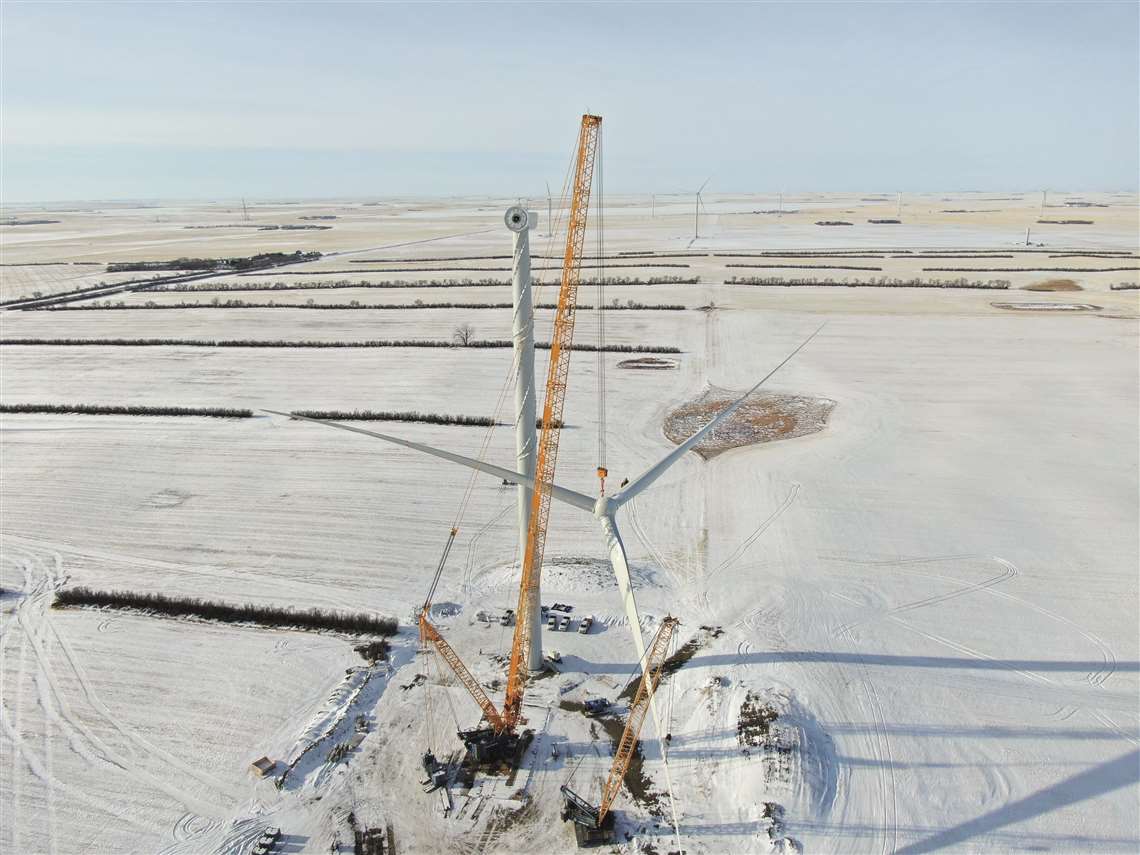 Sarens collaborated with Borea Construction to lift the largest rotor assembly ever lifted in Canada to date.

Each wind turbine at the energy facility has a 110-meter hub height, and for the heaviest lift, the crane was configured to 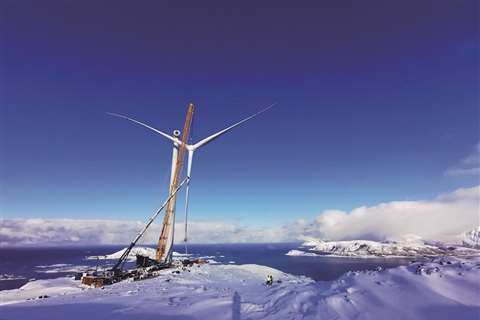 Looking back at historic Freedom Tower construction
Lifting and placing the spire atop the One World Trade Center building in NYC was an incredible feat of engineering.
Latest News