The new $3.9 million Mansion House Bridge recently erected in Jim Thorpe, PA is the result of a 25-year effort to connect the Delaware & Lehigh (D&L) Trail and the Rails-to-Trails system. The planned 47-mile D&L Trail is part of the Delaware & Lehigh National Heritage Corridor that, when complete, will preserve an historic pathway that once was used to transport coal and iron. The bridge is a long-awaited connection for hikers and bikers. 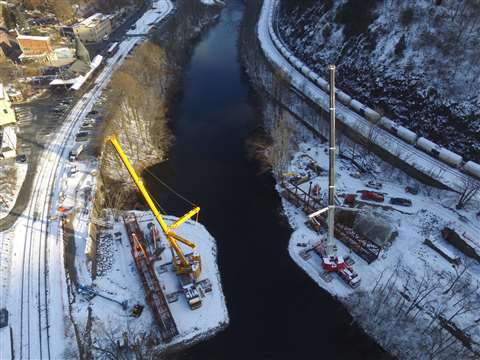 The erection of the bridge took place in December, when the weather was less than ideal.

When it was founded in 1818, Jim Thorpe, PA was known as the “Mauch Chunk” borough. It was renamed Jim Thorpe in 1953 to honor Olympic medal winner James Francis Thorpe. In addition to its title as one of the “Most Beautiful Small Towns in America,” visitors from nearby Philadelphia and New York City frequent Jim Thorpe for hiking, biking, white water rafting, skiing and horseback riding. Carbon County Commissioner Wayne Nothstein said the new bridge is expected to significantly increase tourism.

The winding canyon of the Lehigh River narrows on its western shore south of Jim Thorpe, making the new pedestrian bridge the only way of continuing the trail south. The erection of the bridge took place in December, less than a week before Christmas. The very tight working geography made moving and positioning the huge cranes complicated. Adding to this problem was that both sides of the river have active freight railroads with daily trains. As well, passenger tour trains operate on the Jim Thorpe side of the river within 50 feet of the west bridge abutment.

Pittsburg, PA-based Latona Trucking was the general contractor for the bridge project. This was Latona’s first undertaking of constructing such a large-scale bridge. Field Superintendent Chris DeCresenza outlined the large amount of planning that was required, especially concerning the tight work areas.

One of the most time-consuming issues was dealing with the railroads and protecting their right-of-ways. On the eastern shore, where both the Reading Northern and the Norfolk Southern run freight lines, there is an active water treatment construction project. Railroad paperwork stalled the bridge erection for 45 days in the spring, pushing the final lift into December and inclement weather.

The iron pedestrian bridge was fabricated in Alabama by Contech Engineered Solutions and transported to Jim Thorpe over a two-day period in the fall of 2017. 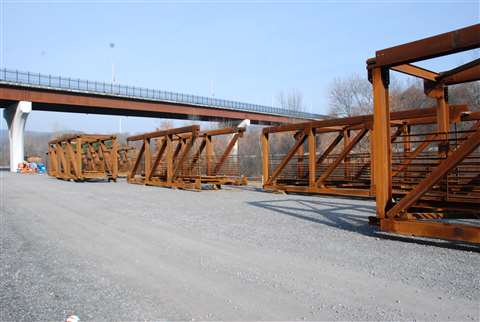 The bridge sections, trucked to the jobsite by Latona from Alabama, were laid flat about a quarter of a mile upstream in a staging area used by a recently finished highway bridge.

The 40,000-pound bridge sections were placed at a staging area about a quarter of a mile upstream. Dickinson Crane used its 40-ton capacity Grove RTC to lift the pieces for assembly.

Later in the project these six sections were lifted onto Latona’s lowbed tractor trailer by a 50-ton Grove truck crane, and then backed down through the parking lot to be lifted by Dickinson’s new Liebherr 1400 all-terrain crane that the company acquired in late June 2017.

Rick Pletz was the site foreman in charge of crane operations and planning for the project. He and DeCresenza spent many hours planning the lifts and determining how to get the cranes in and out.

A second crane was originally coming from another company, but because of project delays, the final lift caused a scheduling conflict. The second crane ended up being a Grove GMK 7550 provided by ALL Crane Rental of Pennsylvania.

A major concern was getting the second crane to its lifting location, which was a narrow access road to the water treatment plant that ran along the railroad. There were many obstacles including stored tank cars and a protruding shear rock wall mountain.

The first issue was determining if the crane would fit down the road. Even if the tank cars were moved, the crane could not move off the road on to the ballasted train tracks to avoid the rocks.

The ALL GMK was transported to the jobsite with the boom on a separate trailer. The crane was assembled in the parking lot of the Jim Thorpe Market. Due to its flexible steering, the Grove GMK 7550 navigated the road with about three feet to spare in some locations.

Meanwhile Dickinson’s Liebherr 1400 was driven to the site with the boom in place. It was set up in the staging area to attach the wings and then driven through the parking area to the west bridge pier about 200 feet past the train station. The crane had to be maneuvered down the extremely tight access road to the lifting pad on the river. About half way down, the Liebherr 1400 encountered a huge rock outcropping that could not be moved. With a little creative maneuvering by crane operators Jake Schuster and Doug Hendricks working together, they cleared the rock and got down to the pad using the chassis elevating feature of the crane carrier. 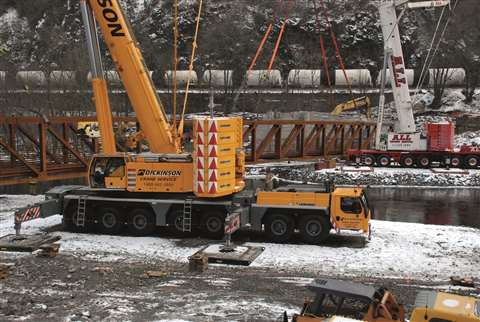 Once in place, the Liebherr 1400 began lifting its outrigger pads and counterweights from a procession of flatbed trailers. It took the remaining few hours of the first day to assemble the 1400. The second day saw the Liebherr 1400 fully assembled and lifting the counterweight assembly from trailers on the west side to ALL Erection’s Grove GMK 7550 on the eastern side of the river.

The third day started with Dickinson’s 50-ton Grove rough terrain crane working at the bridge assembly site loading one of the bridge sections onto Latona’s low bed tractor trailer and then backing the rig down through the parking lot to the ever-narrowing access road next to the western side bridge pier.

The Liebherr 1400, known as Crane 1, was rigged to the bridge section then lifted it down to its river pad where it was disconnected. Next, Crane 2, the Grove 7550, reached across the river, rigged onto it and lifted the first section to its side of the river.

While the first section was still in the air, Jim Morris, site inspector, had the crane lift the bridge section over to the eastern pier for a test fit. Satisfied that there wouldn’t be a problem, Crane 2 proceeded to set the section down on a tight landing between the crane and the pier to later be joined by two more sections forming half of the bridge. As this was happening on the eastern pad, the Liebherr 1400 was doing the same on the western pad. 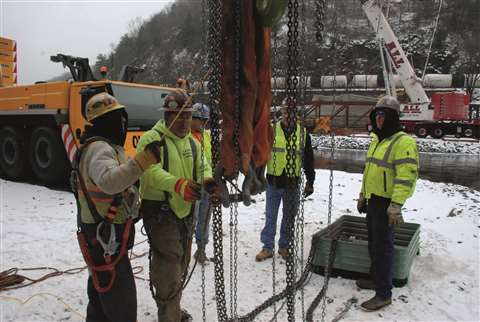 Rigging the bridge sections was complicated. It took several hours to balance the loads and set the chain-hoists to their proper heights until the bridge mating could start.

The next few days were spent lining up and inserting more than 400 bolts into the sections until there were two half bridges assembled, one on each side of the river. During the assembly, both cranes held and maneuvered each section into place for the ground crews to do their work.

The weather changed to a cold wind and a coating of snow, causing the work to slow. For safety, and to relax the work environment, Latona’s DeCresenza and Dickinson’s Pletz made the decision to move the final lift day ahead to the next week on Monday, December 18.

On that morning, after several safety meetings at different locations around the jobsite, the cranes were fired up around 8:30 a.m. and the rigging began. It took several hours to balance the loads and set the chain-hoists to their proper heights until the bridge mating could start.

Slightly after 11:30 a.m., both cranes began lifting, and by noon the two halves of the bridge were lined up crossing the river to be joined in the middle.

Both cranes maneuvered their loads with their respective bridge ends set on blocks on the side of each pier while the center section floated about five feet in the air above the river. This allowed the men on the work platforms to reach the center bolt holes from the ground.

The two aerial work platforms were a 75-foot JLG on the upstream side and an 85-foot Genie platform on the downstream side. As workers began maneuvering the bridge sides, the come-alongs torqued the two pieces together. A huge bang could be heard in downtown Jim Thorpe.

The bolting continued into darkness, facilitating the use of several portable light plants. Around 6:30 p.m. Joe Latona, owner of Latona Trucking, had a pick-up truck load full of pizza and hoagies brought in for an impromptu dinner for the crew. By 7 p.m. the ground crews were back working on the bolts, with only a few to go on a top center cross member. A problem developed when it was discovered that four holes were off just a fraction, and even with drift-pins fully hammered in, still would not accept the bolts, no matter how much they tried. 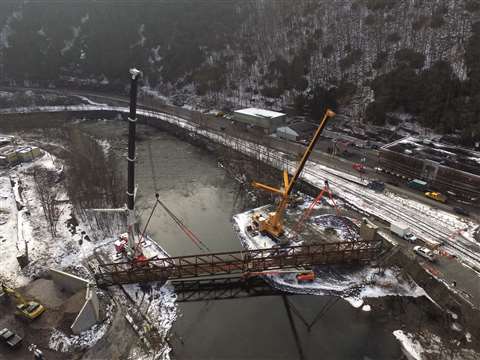 The Mansion House Bridge is a new landmark in Jim Thorpe, PA.

Morris went up and determined that the lift could continue with the drift pins hammered in all the way. The next day the holes would need to be reamed out with a drill.

Just before 9 p.m. the two cranes began lifting together bringing the entire 250-foot-long bridge up in the air and floating it into position. At 9:02 p.m. the new Mansion House Bridge at Jim Thorpe touched down. After a few bolt nuts and the removal of the rigging straps, the new bridge was home.

Early Tuesday morning saw the sun shine on a new landmark in Jim Thorpe, PA. Crane 1 reached across the river and helped dismantle Crane 2. ALL Erection’s crane began motoring off the pad around 11 a.m. It took about 45 minutes for it to navigate back to the market parking lot to begin removing the boom for the trip to its next job.

Dickinson’s Liebherr continued to work, hooking up to the center of the bridge while Latona’s ground crew finished reaming out the misfit holes and placing new bolts in place of the drift-pins. A short time later, after the remaining new bolts were torqued to the proper poundage, Crane 1 was disconnected and put to bed for the day.

The next day Crane 1 removed its counterweights and moved to the assembly area off the river pad. As soon as it left the river, Latona’s excavators started removing the “rip-pap” pad from the river. By the end of the week it was all trucked out using 15 tri-axle dump trucks. The river bank was returned to its original, if not improved, condition.

The bridge deck has been secured from entry, and the project will be halted until spring when Latona’s crews will begin placing the ironwood deck on the bridge and the approach work is completed. The Mansion House Bridge official dedication ceremony is scheduled for June 1, 2018.