The Wisconsin Senate passed Senate Bill 186 Milwaukee County High-Wide Route into law on November 30, which is a first-of-its-kind win for the specialized transportation sector. 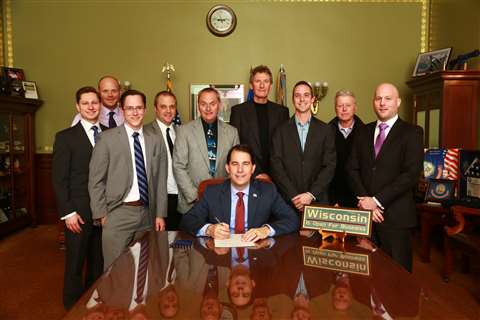 Introduced by Wisconsin State Sens. David Craig, Van H. Wanggaard, Tim Carpenter, Chris Larson, Lena Taylor and Rep. Joe Sanfelippo, the Bill states that, in general, no person may install any structure along the route within the area necessary for the passage of a high-wide load without the authorization of the City of Milwaukee. Also, no person may take any action that would make any portion of the route permanently unavailable for use by a high-wide load, which is defined as a motor vehicle that exceeds general state limitations on motor vehicle size, is transporting property, and is not more than 28 feet wide or 23 feet tall.

“Prior to the passing of this Bill,” Kokta said, “there was no way to stop an entity from placing impediments along the route. With the addition of new cable and fiber-optics lines, round-a-bouts, pedestrian- friendly street crossings, bike lanes and other obstacles, routing was becoming impossible. Thousands of dollars would need to be spent by the carrier to remove or alter the obstacles, and then restore them. This legislation, in effect, protects the route, makes everyone aware that it exists, and forces them to plan around it.”

SC&RA Vice President Steven Todd, who participated in the Wisconsin Department of Transportation’s OSOW Corridor Management and Preservation Working Group with Kokta, sees the new Bill as a groundbreaking development worthy of replication.

“This is significant in the sense that no other similar corridor guarantees dimension thresholds at this level,” Todd said. “We intend to use our win in Wisconsin as an example for other states to follow, and we are especially appreciative of Wisconsin Department of Transportation officials Aaron Michelson and Dan Mulder, and Jason Culotta with Progressive Rail, Inc., for their leadership on this issue,” Todd added.

The route is open to all carriers, nationwide and is well known by the City and County permit officials. It begins at the northernmost intersection of South 70th Street and West Washington Street in the city of West Allis and ends at the northern terminus of South Car Ferry Drive.