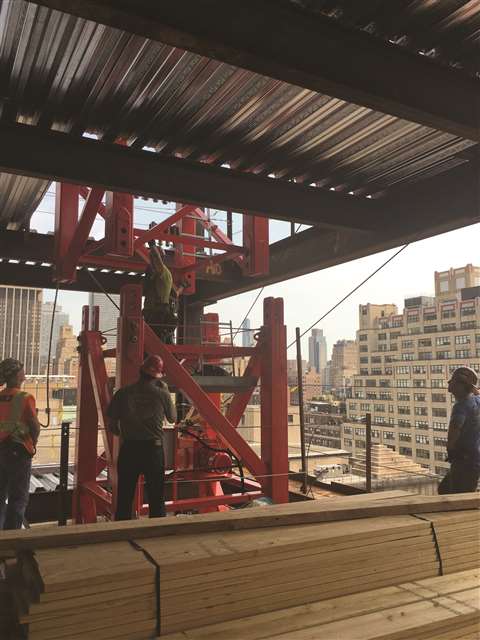 The Wolff tower cranes bring up bundles of steel from the ground level to be landed on the working floor, and from there the erector will shake out the bundled steel and begin to put it into place.

When you think of the Big Apple, the first things that come to mind are the electric lights of Times Square, the Statue of Liberty and the constant hustle and bustle of the city that never sleeps. Not to mention the elaborate skyline filled with skyscrapers and, more often than not, cranes.

Two Wolffkran tower cranes are now in the air in Manhattan where they are assisting in the addition of another building on the city’s skyline. Manhattan West is among the latest up-and-coming neighborhoods in New York City, and a set of Wolffkran cranes are hard at work on a building that will eventually serve as one of the tallest in the city clocking in at 67 stories.

The building being erected is One Manhattan West, which is part of the Manhattan West Project that will consist of four high-rise towers, a large technology center and two acres of an open space park. According to the project website, at more than 7 million square feet, Manhattan West will be a community made up of custom-designed office spaces, curated food, retail, pop-up experiences, abundant green space, homes and a boutique hotel.

Both Wolff units were contracted to the steel erector by Federated Crane to erect the exterior steel structure of the building. The steel will surround the building’s concrete core. 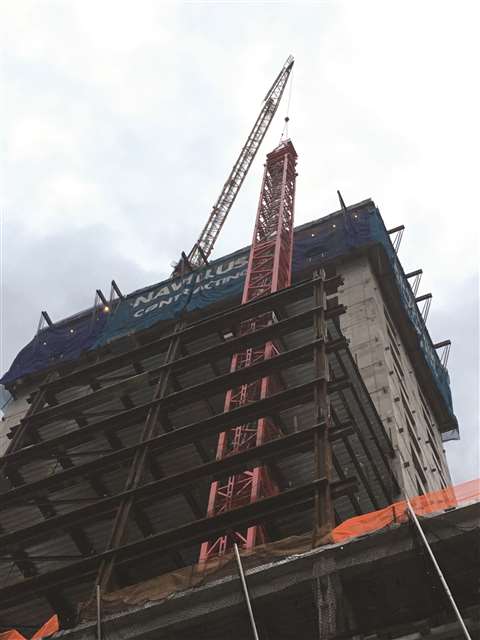 The 355B on the south side is rising with the Wolff internal climbing system which minimizes the necessary amount of tower needed to scale a 1,000-foot building. The Wolf 700B, is mounted on a foundation at ground level and will feed itself with the necessary number of tower sections.

“The safety, reliability and quality of our machines, combined with functionality of our external and internal climbing systems make these machines an excellent choice for the project,” said a spokesperson for Federated Crane. “We also attributed the compact size of the machines with their minimal tail-swing, as well as the cranes being electric powered as factors which will hopefully prove beneficial to the project.” 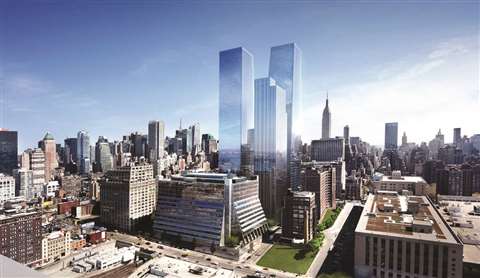 The building being erected is part of the Manhattan West Project that will consist of four high- rise towers, a large technology center and a two-acre open space park. (Rendering of Manhattan West courtesy of Miller Hare.)

On this type of building with a steel surround and a concrete core, the steel erector is handling steel beams, columns, decking and other miscellaneous materials needed for the completion of the steel erection process. Typically, on a tier building such as this, the cranes will bring up bundles of steel from the ground level to be landed on the working floor, and from there the erector will shake out the bundled steel and begin to erect each piece as called for. The company said that although this may sound like an over-simplification of the process, it is repeated over and over until the building is complete. This repetition of hoisting, swinging and climbing to keep a job of this magnitude on schedule is certainly a grueling process. The company said the reliability and performance of the Wolff cranes are proving to be an excellent combination toward the success of the complex, intricate project.

“As in any big city, the problem of congestion leaves no room for a lay down area to store the building materials on site,” said the Federated Crane spokesperson. “So, the logistics of delivering all the steel by truck to the crane’s hook and placed up on the building make it critical that the cranes are performing as expected.

According to the company, although Wolffkran luffing tower cranes are relatively new to the U.S. market, they are quickly recognized for their performance and reliability. They have begun popping up on a variety of metropolitan construction sites. 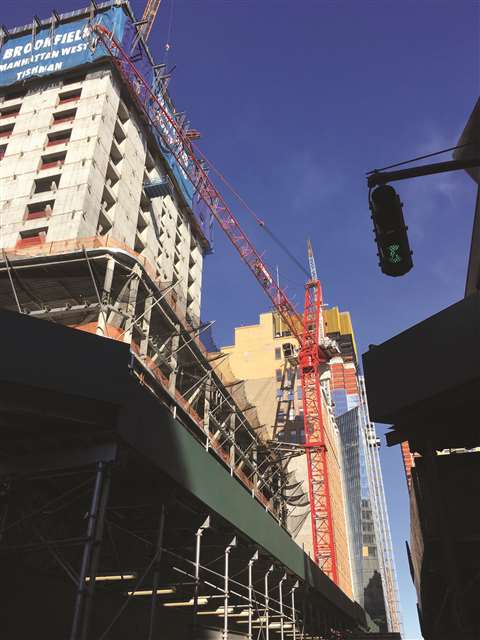 On the north side of the building a Wolff 700B is situated, with a maximum lift rating of 110,230 pounds also equipped with 164 feet of luffing jib using an external jacking system.

It is also important to note that New York City often proves to be a challenging city for construction as spaces are tight, streets are active 24-hours a day and the construction regulations are strict. However, according to Federated Crane, their involvement and knowledge of the local logistical and bureaucratic issues of a large city such as NYC will be extremely beneficial to the success of the crane usage.

Both cranes are estimated to remain on location for a little over a year, as the development is set to be completed in the fourth quarter of 2019. Once completed, the 2-million square foot building will house Skadden Arps, Slate, Meagher and Flom LLP, McKool Smith and the new headquarters for the NHL.