Women in construction are a new driving force.

According to the National Association of Women in Construction (NAWIC), a little over one million women are employed in construction, which comprises about 10.3 percent of the workforce, and women continue to gain ground every year. 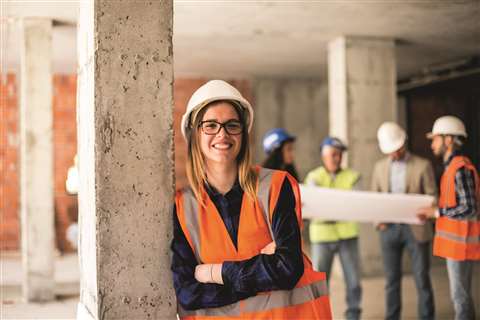 The construction positions that women occupy also vary – from the jobsite to the office, from technologists to painters. And with millions more construction jobs added to the industry post-pandemic, the forecast looks good for women.

In fact, this could potentially be the best time ever for women to consider a career in construction. Before the pandemic, women consisted of more than 50 percent of the country’s workforce. But that number dropped sharply as many had to choose between showing up at front-line jobs or caring for their children, who, with daycare centers closed and remote school underway, would otherwise have been left without supervision.

As a result, many American women have had to rethink their career choices entirely. And as so many in construction and related industries know, workforce shortages are a constant concern and new talent will be needed to rebuild the economy as well as the nation’s crumbling infrastructure. The good news for women: in 2019, average hourly earnings in construction began to surpass $30 – and typically, wages in construction land around 10 percent higher than those in the private sector (Associated General Contractors of America). The Bureau of Labor Statistics also recently pointed out that the types of construction jobs popular with women range in salary from $68,000 for laborers and painters to $156,000 for construction managers.

Of the slightly more than one million women currently in construction, the NAWIC says their career paths fall into these categories: professional and management – 44 percent; sales and office roles – 28 percent; service occupations – 21.1 percent; production, transportation and material moving – 5.9 percent; and natural resources, construction and maintenance – 1 percent.

Additionally, the amount of women construction managers increased 101 percent between 2015 through 2019, equaling almost 100,000. Female construction and maintenance painters increased by 64 percent. And women construction laborers increased by 50 percent. In fact, 13 percent of all construction firms are female-owned, with 64 percent growth in women owners from 2014 – 2019. Equally impressive, 9 percent of women-owned firms achieved revenues greater than $500,000. Relatedly, according to a recent study done by Gartner, Inc., women comprised 41 percent of the supply chain workforce in 2021, up from 39 percent in 2020. Moreover, the percentage of women in the supply chain workforce is at its highest level in years.

But while it’s easy to get caught up in many of these positives, it’s still important to recognize the challenges for women in construction. Indeed, construction supports gender-pay equality more than most industries – women in construction make an average of 95.7 percent of what a man would make doing the same job. But still, according to a study done by BigRentz, Inc., 43 percent of firms do not actively monitor gender pay gaps, while 73 percent of women feel passed over for roles because of their gender. Women also have a higher risk of workplace injury due to poorly fitted equipment. Additionally, 60 percent of gender discrimination victims in the workplace are women. And 47 percent of women have never worked with a manager who is a woman.

While one side of the narrative sheds a productive and positive light on the opportunities available to women in the construction industry, there is still much work to be done. A colossal silver lining? It appears that as more women enter the space, their impact serves to both stabilize company culture(s) and spearhead growth.

All the more reason to aim your recruiting efforts – if you haven’t already – at a workforce ready, willing and able to elevate your company today, and over the long term: women.